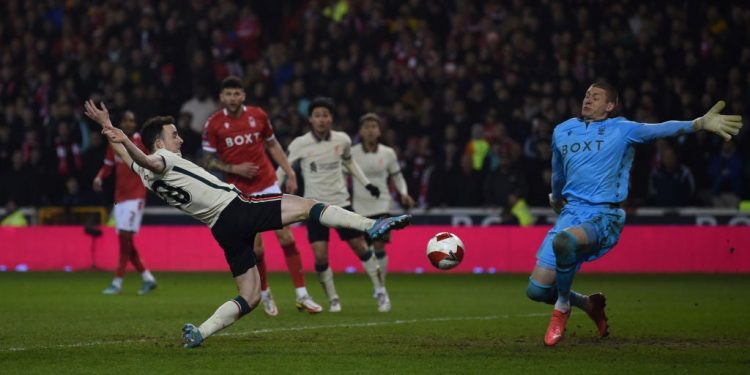 This FA Cup quarter-final was contested by two clubs who, once upon a time, made up English football’s leading competitive rivalry. Liverpool’s hard-earned victory – delivered by a late Diogo Jota goal – has set up its modern day equivalent in the semi-finals, against Manchester City at Wembley next month. Yet a resurgent Nottingham Forest will have ended this breathless tie wondering what might have been.

What if, minutes before Jota’s decisive goal, Philip Zinckernagel had converted the best chance of the game up until that point? What if a contentious late penalty call had gone against Alisson and in favour of Ryan Yates, who had rounded the Liverpool goalkeeper, went to ground and was told to get to his feet? What if Forest had taken the Premier League title contenders to extra time, as had started to seem likely?

Steve Cooper and his players will replay those moments in their heads after missing out on a first semi-final since 1991, though should not let them take anything away from a performance that warranted at least another half hour and perhaps the lottery of a penalty shoot-out. Liverpool were the superior side, as expected, but were made to sweat for their first semi-final showing under Jurgen Klopp.

This was the first edition of this fixture in 23 years and the first FA Cup meeting between the two clubs since the semi-final replay in 1989, three weeks after the Hillsborough disaster. A lot has changed in the intervening period, at both clubs and beyond. But despite the echoes of history and all that has happened since, the City Ground crackled in anticipation of what was to come.

Cooper, once a coach at Liverpool’s academy, has built an energetic, young side since his appointment in September. This run to the quarter-finals of the world’s oldest cup competition, which has claimed the scalps of two most recent FA Cup winners in Arsenal and Leicester City, has only lent credence to the belief that he can lift the two-time European champions out from more than two decades of mediocrity.

Liverpool may be known for the fast, unrelenting tempo to their play but their hosts for the evening were happy to match it. Forest were first to their opponents when out of possession – the combative Yates, in particular – and on the front foot once they regained it. Joe Lolley might have converted Zinckernagel’s low cross to the far post after only eight minutes yet hesitated and sent the ball back for where it came for Naby Keita to clear.

That was the clearest sight of Alisson’s goal that Forest had during a first half that Liverpool grew into and gradually dominated, though they created few clear openings of their own. A lot of them fell to back-up left-back Kostas Tsimikas, who sent a couple of shots fizzing over the crossbar. On the other wing, Liverpool were missing the vision and imagination of Trent Alexander-Arnold, who sat out with a hamstring injury.

Indeed, for all their possession during that first half, Klopp’s side were presented with their best opportunity by Jack Colback, whose wayward pass played Roberto Firmino through one-on-one with goalkeeper Ethan Horvath. The United States international stood tall in his goalmouth, which only made Firmino’s decision to try and chip him all the more curious. Horvath swatted his tame attempt away with the contempt it deserved.

At the other end, Alisson had been rather unoccupied in the Liverpool goal but a mis-hit pass under pressure at the start of the second half could easily have been punished if, in the scramble to make something out of it, Keinan Davis had not strayed into an offside position. Still, Forest were surviving and putting up enough resistance to force Klopp into a quadruple substitution once the hour mark passed.

Luis Diaz, Thiago, Jordan Henderson and Takumi Minamino were all thrown on at once but Forest continued to give as good as they got, making as much as possible from the counterattacking opportunities that intermittently came their way. Liverpool’s defence looked uncertain of how to deal with their transitions. Forest’s golden chance was still to come, too, but it would be wasted.

It fell to Zinckernagel and he was substituted shortly after stabbing wide from an unmarked position inside the Liverpool penalty area, having queued up to receive Brennan Johnson’s low cross on a rapid Forest counter-attack. To Alisson’s right, the Dane had an open half of the goal to aim at. Instead, he placed his shot to the goalkeeper’s left and well past the post and his wastefulness would be swiftly punished.

Moments later, Jota showed the instinct that Zinckernagel had lacked when poking Tsimikas’s right-footed cross past Horvath. On first glance, Jota appeared to have strayed marginally offside, just past Tobias Figuereido’s shoulder, but he had in fact timed his dart in at the far post to perfection. After a VAR check, the goal stood. Forest were not beaten yet, though, and hoped the technology would work in their favour on Yates’s penalty claim.

Alisson had come off his line somewhat late to meet the midfielder, who was slipped through on goal late on. Yates’ touch was heavy, the ball was going wide and if he is honest, he might admit that he left his foot there to clipped by the onrushing goalkeeper. There was contact, though, and referee Craig Pawson deferred to his video assistant. It was a marginal call but one that went in Liverpool’s favour and ended the cup run of their rejuvenated old rivals.