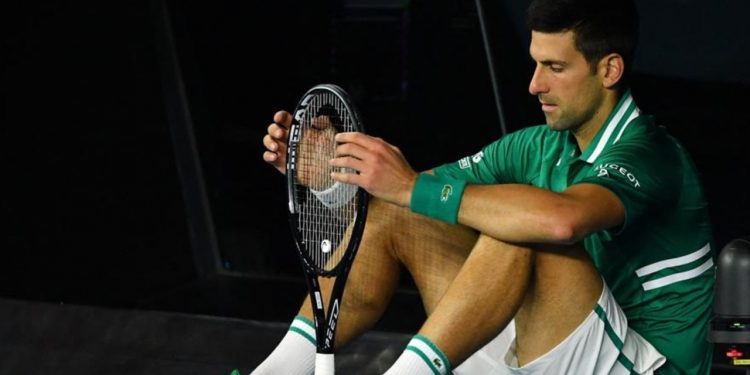 Both sides have laid out their arguments and now all Novak Djokovic can do is wait to find out if he’ll be allowed to stay in Australia.

Both sides in the Novak Djokovic legal battle have made their case to the Federal Court today as the tennis champ challenges immigration minister Alex Hawke’s decision to cancel his visa.

The three judges hearing the case have now said a decision could be made as early as this afternoon – but possibly as late as Monday morning. Djokovic is due to play in the Australian Open on Monday.

On Friday, Mr Hawke made the call to deport Djokovic from Australia “on health and good order grounds, on the basis that it was in the public interest to do so”. The minster used his personal power to overturn a decision in the Federal Circuit Court last Monday that allowed Djokovic to remain in the country.

On Sunday, the Serbian superstar’s lawyer said the minister’s reasons for trying to kick out Djokovic were “wrong,” “extremely weak,” and “irrational”.

Nick Wood QC, for Djokovic, questioned Mr Hawke’s apparent reliance on a single news article to judge Djokovic’s views, and his assertion that the 20-time major winner will stir up anti-vax sentiment if he remains in Australia. Indeed, they have said his departure could generate even more negative attitudes towards jabs.

But the minister’s solicitor said Djokovic’s views were well-known and he was an “icon for the anti-vaccination groups”.

A comment from one of the three judges, who said it was “common sense” that the minister did not have to list every source to ascertain Djokovic’s feelings towards vaccinations, could be considered a blow for the tennis player and may help the Government’s case.

The case was heard by a full bench of the Federal Court of Australia, comprised of Chief Justice James Allsop, Justice Anthony Besanko and Justice David O’Callaghan.

Waiting game for a decision

The arguments have now wrapped up in the case. In short, Djokovic’s lawyers have questioned immigration minister Alex Hawke’s assertion the tennis player could fuel anti-vax sentiment, and suggested the minister relied on a single news article to determine his views.

The Government’s counsel has said Djokovic’s views are well known and if companies pay him lots of cash to promote products because of his influence, it stands to reason that influence extends to his position on vaccines.

If a decision is made today the judges may not lay out all of their reasons for it. Whether Djokovic can stay or go is needed swiftly, the reasons why can wait, seems to be the view.

‘Damning’ oversight made by minister

After both Team Hawke and Team Djokovic finished their arguments, either side was allowed to reply to any of the points made.

Mr Wood, for Djokovic, went back to the BBC article which they are heavily relying on to dismantle the government’s reasons for the visa cancellation.

The claim by Djokovic’s lawyers is that minister Hawke was “selective” in his quotes from the BBC article which otherwise – in their reading – does not paint the star as a committed anti-vaxxer.

For instance, the report also says that “Djokovic has never explicitly come out in support of (the anti-vaxxers’) more extreme positions”. But this section was not mentioned by minister Hawke in his reasons to cancel the visa.

In addition, his lawyers have argued that deporting Djokovic could stir up even more anti-vax feeling in Australia then letting him stay.

This was a “damning” oversight on the minister’s part, said Mr Wood.

“Nowhere in the reasons does the minister refer specially to the second half of the BBC article which spoke to the anti-vaxxer aggravation that has emerged in Melbourne in part this week in response to the cancellation,” Mr Wood said.

“One simply doesn’t see it.”

Mr Wood appeared to be making the point that it is the cancellation of the visa that has galvanised protests against vaccines, not Djokovic simply being in Australia.

“Even if the minister was aware of it, even if he carefully read the whole BBC report, what is damning in my submission is that if what concerns him is anti-vaccination sentiment that there is certainly no discussion or weighing up of it in the ultimate assessment of the public interest,” Mr Wood said.

Lawyers for Novak Djokovic have been trying to persuade the three judges that much of the minister Hawke’s reason for barring the tennis star was down to alleged anti-vaccination comments and that he used a single BBC News article (see below for more on this) to make this case.

They have argued the quote from the article used by the minister was “selective” and “misleading”.

But in what could be a blow for the world No 1’s legal team, Justice James Allsop has said the minister can also draw on “rational and reasonable use of perception and common sense” in determining Djokovic’s views.

So while Djokovic’s team is relying heavily on essentially throwing out the BBC article, one of the three judges has said the minister can assume the Serbian has anti-vaccination tendencies based on far more than one story and the minister doesn’t have to lay out all the sources for that conclusion.

That’s a huge help to Stephen Lloyd, the QC for the minister, who laid out the government’s case for why the visa cancellation should stand.

He has said Djokovic’s vaccination stance is indeed based on more than one quote in one article.

“It’s not just the applicant’s public statements that he is opposed to vaccination, it is the fact of his ongoing non-vaccinated status,” Mr Lloyd said.

“He could have been vaccinated if he wanted to be”.

Mr Lloyd has backed up the minister’s view that Djokovic’s mere presence in Australia could whip up anti-vax sentiment.

“The concern is that he’s a high profile person and in many respects a role model so that his presence in Australia would present more strongly to Australians his anti-vaccination views,” Mr Lloyd said.

“The applicant has a history of ignoring safety measures.

“When he was infected he undertook an interview and a photo shoot [that’s the now infamous L’Equipe interview] which included taking his mask off and the minister took the view his presence in Australia would encourage people to emulate his apparent disregard for those kinds of safety measures.”

Mr Lloyd said Djokovic was a known “icon” for anti-vaxxers.

He made that statement as e was being quizzed by Justice James Allsop on whether the minister had provided enough proof that the tennis star was indeed someone anti-vaxxers looked up to.

Mr Lloyd said it was “common sense” and “uncontroversial” that celebrities could influence people, after all that’s why advertisers paid them to spruik their products.

He called Djokovic an “icon” on at least three occasions.

“The applicant’s views on vaccination are widely understood. So the minister has to make a decision about the risk in regard to how he has become an icon for the anti-vaccination groups,” Mr Lloyd said.

Lawyers for Novak Djokovic have tried to demolish the reasons for cancelling the tennis champ’s visa saying they were “wrong,” “extremely weak,” and “irrational”.

Nick Wood SC, representing Djokovic, on Sunday said the statement of reasons given by Immigration Minister Alex Hawke regarding the visa cancellation were “grasping at straws”.

“The Minister tries to cut us off at the knees,” Mr Wood said at today’s hearing, referring to the reference to Djokovic potentially being a rallying point for those against vaccination.

But Mr Wood argued that the Minister overreached in this explanation and that the visa cancellation was “irrational, logical and unreasonable” as it could actually stir up anti-vax sentiment more than the Serb remaining in Australia.

“The proposition we put is it’s quite obvious that (cancelling the visa) might be apt to generate anti-vax sentiment and the evidence before the minster went that way,” Mr Wood said.

“Not a single line of evidence in the material before the Minister provided any … foundation whatsoever for the proposition that the mere presence of Mr Djokovic … in Australia may somehow, to use the minister’s expression, ‘foster anti vaccination sentiment’”.

Djokovic’s legal team has also delved into a BBC News article cited by the minister in his reason to cancel the visa.

The article headlined What has Novak Djokovic actually said about vaccines? was published on January 6.

A line in the article said: “In April 2020, well before Covid vaccines were available, Djokovic said he was ‘opposed to vaccination’.”

However Djokovic’s legal team has said this passage was “selectively” chosen by the minister and was “somewhat misleading”.

They pointed out that just under that line was another that said Djokovic “later clarified his position by adding that he was ‘no expert’ and would keep an ‘open mind’ but wanted to have ‘an option to choose what’s best for my body’.”

Mr Wood said it was “plainly wrong” to rely on that line to show that Djokovic was an anti-vax hero.

“The Minister is grasping at straws,” said Mr Wood, who added that elements of the cancellation reasons were “extremely weak” and there were “elementary errors” by Minister Hawke when he referred to press reports — some of which did not cite Djokovic at all.

Djokovic on the move as bombshell claim addressed

A Serbian health ministry official has denied there is anything untoward about Djokovic’s positive Covid-19 test result from last month after questions were asked about its validity.

Last week reports emerged Djokovic’s positive Covid test on December 16 — the one he was using to justify obtaining a medical exemption to enter Australia — may have been “manipulated”.

According to an investigation by German newspaper The mirror, the digital time stamps on Djokovic’s test result – accessed via Serbia’s public central test registry – suggested the test was not from December 16 at all, but rather 2.21pm on December 26.

Further details cast doubt on the nature of the test result but Zoran Gojkovic, who works as part of Serbia’s Crisis Staff fighting the spread of the virus in the country, claimed it was perfectly legitimate.

Shortly after 8.30am, Djokovic left the Melbourne detention hotel he was moved back to last night and headed to his lawyers’ offices ahead of the hearing.

Djokovic could cause ‘civil unrest’

Australia returned Novak Djokovic to detention on Saturday, saying the tennis star’s opposition to vaccination could cause “civil unrest” and triggering a high-profile court showdown.

The case will be heard by the full Federal Court of three justices, a format that leaves little room to appeal any decision.

For now, the Serbian ace is back at a notorious Melbourne immigration detention hotel after a few short-lived days of freedom following his first successful court appeal on Monday. A motorcade was spotted moving from his lawyers’ offices — where he had been kept under guard for most of Saturday — to the former Park Hotel facility.

In court filings, Australia has cast Djokovic as a figurehead for anti-vaxxers and a catalyst for potential “civil unrest” who must be removed in the public interest.

Not only could Djokovic encourage people to flout health rules, Hawke said, but his presence could lead to “civil unrest”.

So with just two days before the Australian Open begins, the defending champion is again focused on law courts rather than centre court.

Optimizing treatments for high blood pressure and cardiovascular disease could save lives, according to researchers

Optimizing treatments for high blood pressure and cardiovascular disease could save lives, according to researchers