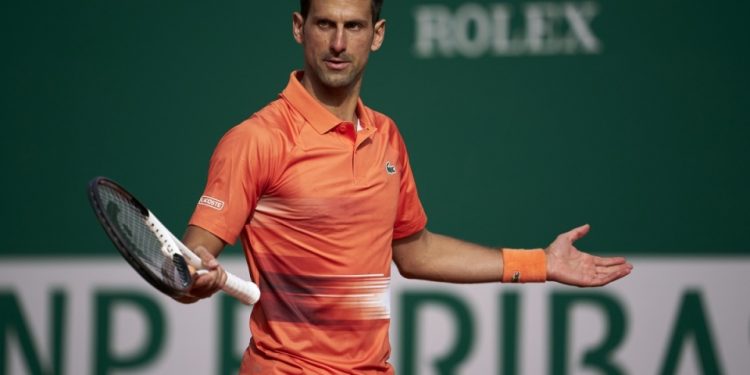 Novak Djokovic’s tumultuous year on and off the tennis court has taken another bump, as the unvaxxed Serbian opened his clay-court season on Tuesday with a shock loss.

Unseeded Spaniard Davidovich Fokina stunned the world no.1 in the Monte Carlo Masters second round, with the 20-time grand slam champion crashing out in three sets.

After the match, Djokovic said he was too exhausted to put up a fight, claiming his lack of match fitness made victory “mission impossible”.

The world no.1 struggled from the outset, as he was broken nine times and made 51 unforced errors in the best-of-three sets match.

Djokovic comfortably defeated Fokina in straight sets in their two previous career meetings. But it was the Spaniard who bested the world No.1 in their third encounter as the defending French Open champion “collapsed” in the third set.

“I didn’t like the way I felt physically in the third set,” Djokovic said on Tuesday.

“He was the better player… I was hanging on the ropes the entire match.”

“I collapsed… I just ran out of gas completely … If you can’t stay in the rally, not feeling your legs on the clay, it’s mission impossible.”

Djokovicwho was deported from Australia for not being vaccinated against COVID-19 and unable to defend his Open title in January, had played only three matches in 2022 so far, ahead of the Masters 1000 event in Monaco.

He last played six weeks ago, when he was eliminated in the quarterfinals of the Dubai Tennis Championships.

It was the only previous tournament he had played in this year, with the Serbian star’s vaccination status continuing to limit his tournament options.

Djokovic received a bye in round one of the Monte Carlo Masters.

The 22-year-old Fokina said rustiness could have been part of the reason for Novak’s loss.

“I knew Novak didn’t have the confidence because he didn’t play a lot this season … I had my chances in the beginning of the match and I took them,” he said after his surprising win.

Djokovic said he hoped to build his form for the French Open starting next month, where he will defend his crown.

‘Get it right’: Still haven’t filed your taxes? 7 last-minute tips to survive a challenging tax season and housing keeps getting more expensive. Is there relief in sight?

'Get it right': Still haven’t filed your taxes? 7 last-minute tips to survive a challenging tax season and housing keeps getting more expensive. Is there relief in sight?