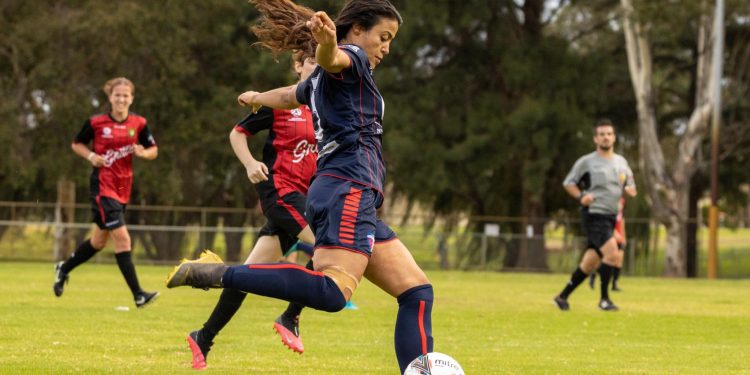 
With last year’s top side Murdoch University Melville having a major change of personnel during the close-season, their tough trip to Balcatta Etna looked like being an early test of their credentials.

More NPL news can be found on The Women’s Game.

Hyundai NTC gained a dramatic 3-2 win over Perth SC after coming from 2-1 down with 13 minutes to go at E&D Litis Stadium.

Perth, with former Perth Glory W-League star Caitlin Doeglas in their ranks, went ahead with just two minutes on the clock. Ella Lincoln earned a corner. The flag kick was played back to Faye Phillips who lofted a ball into the mix which was volleyed home by Jaime Duncanson.

NTC levelled matters just after the half hour mark when Perth goalkeeper Rebecca Bennett’s attempted clearance was charged down by Olivia Trueman and ricocheted straight into the net.

The lead went back to the visitors with 61 minutes played. From a free-kick on the right, the NTC goalkeeper came and missed which allowed Duncanson to turn the ball home for her second of the night for Perth SC.

Then, as the rain hosed down, the NTC finally got the breaks that they will feel their territorial hold deserved. With 77 minutes played, Bennett’s clearance was given away and Louise Tana lifted the ball into the net from over 20 yards for a sensational equaliser.

Seven minutes before the finish, NTC took the points with another superb goal as Grace Johnston’s corner on the left flew straight into the net. After hitting five goals last week against Hyundai NTC, Perth RedStar went one better in Round Two by hitting six past Curtin University.

RedStar, welcoming Perth Glory A-League Women defender Sarah Carroll into their team, went ahead with 12 minutes on the clock. Pressuring the Curtin right gained turn over ball. Playing inside and mounting a passing triangle outside of the box, Hannah Insch took over and rolled a low shot into the net.

Curtin levelled four minutes before the break as Danielle Suckling won possession in side her own half and after a long ball out to the right, the home side won the challenge slid in with RedStar goalkeeper Shivani Battaglia to score.

The outcome turned with three goals in nine minutes. First, a ball over from the right found Larissa Walsh in space at the back post to slot in. It became 3-1 when Curtin again failed to deal with a cross from the same flank which allowed Walsh in once more. Before the hour mark, Walsh’s ball in was punched clear by Cavill, but only as far as Jacinta Coleman who saw her effort come back off the bar. The rebound eventually was worked back in for Renee Leota to beat her defender and volley in.

There were two further goals for RedStar in the final eight minutes as the rain poured down at Edinburgh Oval. Coleman drove through the middle and laid off to Alkira Mogridge to fire high into the net. Scoring was completed when once more a ball in from the right caused chaos. This time, it bounced at the near post, wrong footing Cavill in the Curtin goal and rolling on for Coleman to easily slot home Perth RedStar’s sixth.

There were few real chances at Grindleford Park in a match played in occasional bouts of torrential rain. The only goal came four minutes from the break when Molly Bolton’s long ball out to the right resulted in a cross which was headed home by Poppie Hooks. The youngster played A-League Women football for Perth Glory at the age of just 16 this season and has started this NPL campaign impressively.

Whilst chances were at a premium, there were two real opportunities in the closing stages. One for either side. Murdoch’s Sam Mathers was denied by a fine sliding save from Gaby Dal Busco who came out of goal to meet the flying attacker.

Balcatta’s chance fell three minutes into stoppage time when Monique Prinsloo’s high cross from the right alluded Monique Todd in the Murdoch goal. At the far post, Yeo chested down but couldn’t get a telling shot away and the visitors bundled clear. Fremantle City maintained their 100% start to the season with a second successive win after seeing off Subiaco 4-1 at Rosalie Park. The visitors went ahead with 13 minutes played when Mikayla Lions’ free-kick was met by the head of Matilda Boyle and looped into the net.

Subiaco levelled just after the half-hour mark as the rain fell. Frankie Murray’s free-kick was floated in from the right, and Chelsie Whinchcombe took advantage of a flap in the Freo box to poke home the equalizer.

Fremantle took a grip on proceedings with two goals in three minutes. First when Jessica Darmago found Lyons who shot across the home goalkeeper into the net. She was at it again to make it 3-1 after being found via a move down the right.

The scoring was completed four minutes from the end as Fremantle City clinched their 5-1 success with a comfortable finish from Kayla McCulloch. The Matildas have put on a clinical first-half performance in Canberra, coming up with a 3-1 win over New Zealand after more Sam Kerr magic. 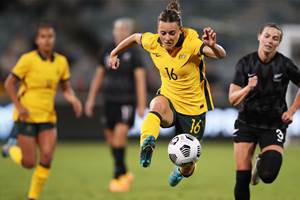 Forward Hayley Raso says the Matildas’ front line is continuing to build cohesion after netting three times in a quality win against New Zealand on Tuesday.