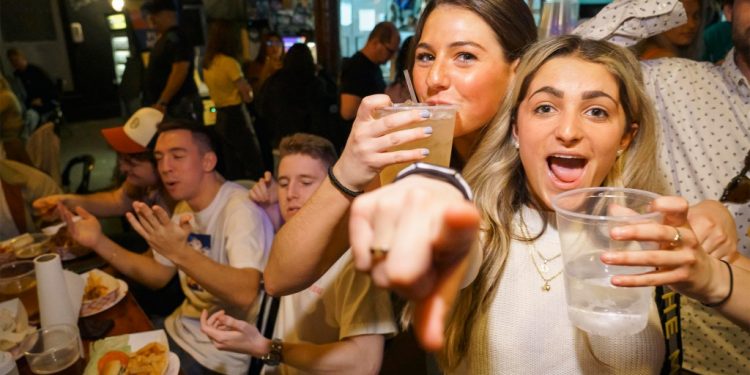 Nights in the Big Apple are once again booming into the wee hours as droves of revelers return to their old stomping grounds in full force.

In Manhattan last Friday night, Slate nightclub in the Flatiron District had lines stretching to the end of the block. Over in Chelsea at Noir, bottles of Champagne were popped, and young women in crop tops mingled with slightly older bros in ball caps, zip-up sweaters and Ralph Lauren button-down shirts. Down in the West Village, at bars such as 3 Sheets Saloon and Off the Wagon, there was plenty of PDA alongside Jägerbombs and tequila shots.

“You hit the gym at 4:30 in the morning, go to work and then you get wasted,” Rob Andersen, a 28-year-old Upper East Side neurophysiologist enthused after downing a few drinks at 3 Sheets.

He and his merry group of friends — who all worked in medicine and finance — chugged beers out of plastic flamingos, thrilled by the warm weather and lifted COVID-19 restrictions.

“The vibe is constantly improving in the city, more and more people keep coming back out,” said Raymond Kreiger, a 28-year-old physician’s assistant also from the Upper East Side.

Although Kreiger is engaged, the rapidly expanding nightlife is making for a healthy hookup scene for singles like Andersen. As he bluntly put it: “Girls are down, man.”

The women at Jeremy’s Ale House at the Seaport would not disagree.

“You’re definitely willing to put yourself out there more, you’re not like, ‘Oh s – – t, they have COVID,’ ” said Caitlin McGuire, 21, and a student at Wagner College on Staten Island. “My friend hooked up with five guys last weekend.”

Even those who aren’t going all out for a makeout are moving at great lengths to get in on the fun again. Metal polisher Brenden Rodriguez, 23, and his bud Jay Sosa, also 23 and a legal case manager, had biked from Ridgewood, Queens, to downtown Manhattan to party.

“We just couldn’t pass it up: a great time on such a beautiful evening like this,” Rodriguez, who was sporting a quart-sized beer, said.

As the night wore on, revelers stayed out, migrating from the pub to the club.

More than 100 people lined up to get into the already packed and pumping Slate.

“I really didn’t think the city would be all that popping with COVID, but it’s alive, and it’s really, really insane in here,” said Jessica Lora, a 30-year-old finance worker from San Diego, California, who was lucky enough to get into the popular nightclub.

Over at Noir, the worries of the past two years seemed far away from the sparklers and popping bubbles.

“Everyone who comes out now doesn’t give a f – – k about COVID,” said Natalie Delautre, a 25-year-old fashion-merchandising student who lives in the Financial District.

Whether grabbing a beer after work or ordering bottle service into the wee hours, a common sentiment prevailed throughout the city. As Joe Palumbo, a 26-year-old sales associate drinking on Stone Street at a bustling happy hour, put it, “It feels back to normal.”