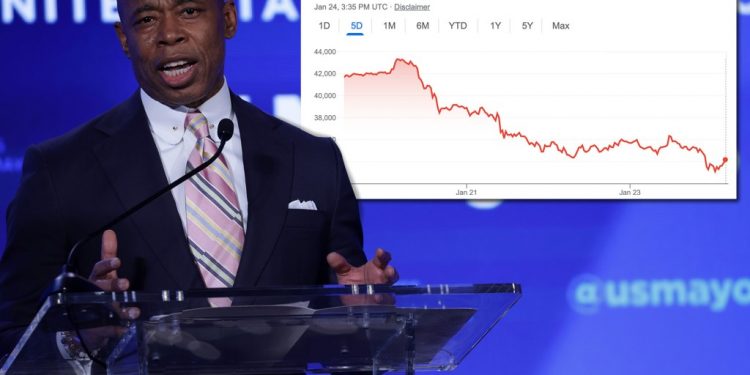 
Maybe he should’ve stuck with cash.

Mayor Eric Adams may have lost more than $1,000 of his first City Hall paycheck in just four days after converting it into cryptocurrency during a plunge in the market, a Post analysis shows.

Adams, who pulls an annual salary of $258,750, said Friday he converted his first biweekly paycheck — worth about $5,900 after average tax withholdings — into the cryptocurrencies bitcoin and ethereum.

From the beginning of the day on Friday until Monday morning, bitcoin’s price plunged by about 15.9%, while ethereum fell 24.3%.

The mayor didn’t detail exactly how he divided his paycheck between the two cryptocurrencies, but a $5,900 investment split 50/50 between bitcoin and ethereum at midnight on Friday would have been worth just $4,714 on Monday morning — a loss of $1,186.

If Adams had put his entire paycheck into bitcoin, he have had about $4,961 Monday morning, while the same amount of money invested in ethereum would have been worth $4,466.

Cryptocurrencies rallied later on Monday, but bitcoin remained about 9.1% below Friday levels on Monday evening, while ethereum was down 18.0%.

The mayor’s office did not immediately respond to a request for comment.

In November, Adams first pledged to take his first three paychecks in cryptocurrency as part of a plan to make New York City into the “center of the cryptocurrency industry and other fast-growing, innovative industries.”

But federal Department of Labor regulations ban city governments from paying workers directly in cryptocurrencies, so the mayor’s office said his paycheck would immediately be converted into cryptocurrency using the crypto exchange Coinbase.

Adams made his initial crypto pledge when bitcoin was trading north of $60,000. It has since fallen below $35,000.

“Sometimes the best time to buy is when things go down, so when they go back up, you made a good profit,” Adams told CNBC on Jan. 6.

In November, Adams caught flak for quietly flying to the SOMOS conference in Puerto Rico on a private Gulfstream jet owned by the bitcoin billionaire Brock Pierce, who also donated to his campaign. A spokesman said Adams paid for the flight through a travel agent.