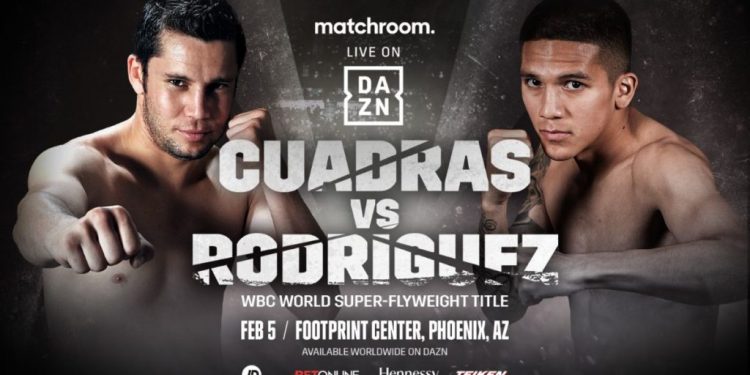 Although many boxing fans were disappointed that they weren’t getting a second fight between Carlos Cuadras and Srisaket Sor Rungvisai (50-5-1), the fight against Jesse Rodriguez is just as good. Although ‘Bam’ Rodriguez isn’t that widely known throughout the boxing scene, the purist has known about him for a little while now, especially within that SoCal scene as he trains with Robert Garcia.

This fight deserves proper attention as ‘Bam’ moves up in weight at the last minute as he dares to be great. I turned to boxing’s sharpest minds for this prediction panel to see which way they are leaning for this fight.

For several years, trainer Robert Garcia tells anyone who asks, and plenty who don’t Jesse ‘Bam’ Rodriguez is his best fighter. Considering his roster, it’s an impressive statement. Bam’s brother Joshua Franco calls himself good but says Bam is elite. Robert and Joshua, you got my attention. So far, Rodriguez has performed well. He’s being asked to fulfill his promise a bit ahead of schedule by taking on the rugged Carlos Cuadras. Rodriguez must fight like he’s got nothing to lose. If he does, he’s got a solid chance to win. If not, he’ll learn a hell of a lot. I’m betting Bam can make it happen. No one-hitter quitters, a late TKO through accumulated punishment.

Credit to both fighters for taking what is a superb replacement fight. While Cuadras will have a huge advantage in championship experience, he may be on the downside of a demanding 13-year career. His edge may be negated by a powerful and active – emphasis on active – challenger. While it is true Rodriguez will be moving up in weight, he is hungry and appears to have the size and durability to hang with the Mexican. He’s also 11 years Cuadras’ junior. With youth and activity on his side, Rodriguez will outwork the veteran for a close decision win.

Both guys made the SuperFly weight limit off 115. Photo Credit: Ed Mulholland/Matchroom.

Cuadras-Rodriguez is the classic pairing of a respected former champion and a hotshot prospect who has been unexpectedly propelled to the biggest of stages. Cuadras will benefit from his huge advantage in experience and from a training cycle in which he prepared to face the still-formidable Srisaket Sor Rungvisai while Rodriguez, who was preparing to fight on the undercard, boasts the element of surprise.

Although Cuadras is far more accustomed to fighting at 115, he won’t have any significant advantages in height and reach, which I believe is a crucial factor given that Rodriguez has campaigned at lighter weights. I believe the stars may be lining up for the upset; Cuadras’ leaky defense, his career-long 15-month layoff, and the fact that Rodriguez is younger, fresher, faster, nimbler, and far more active (his last fight was just 112 days ago) will result in “Bam” scoring the TKO victory.

Abe is a smart man. Bam is a fighter he has been drawn to and has all the tools to be a pound-for-pound fighter in the lower weights. This should be a spectacular arrival on the scene for exciting new talent of the sport, and possibly given the result of fellow San Antonian main eventer Mario Barrios, the biggest night in the cities sports history since the Spurs won the NBA championship in back-to-back years in 2005 and 2006.

I love this matchup. This is an excellent step up fight for Jesse “Bam” Rodriguez to show off how skilled he really is against a seasoned veteran in Carlos Cuadras. Rodriguez is moving up in weight to challenge for his first world title. I don’t moving up in weight will affect him in his footwork, movement and speed. He’s just such an incredibly talented fighter. Cuadras was training hard for an incredibly tough fight against Srisaket SorRungvisai. I don’t know if Cuadras will be quick enough to keep up with Rodriguez’s movement in the ring let alone the barrage of punches coming from every angle possible. All I know this is must-see tv! UD 12 Rodriguez.

Jesse ‘Bam’ Rodriguez has a headbanging style made for this kind of scenario. Training at Robert Garcia Boxing Academy affords him the ability to face experienced opposition on a continual basis. Though Carlos Cuadras has extensive experience, it’s always tough to fight someone with pure strength. It all depends on if Rodriguez can bring that strength up to 115 pounds. At 108, he was a little monster. We shall see how he fares at 115. But natural strength is his ally.

Carlos Cuadras vs. Jesse ‘Bam’ Rodriguez pits the seasoned veteran against a hungry up-and-comer. Cuadras is as tough as they come, but he’s been through numerous wars. I think Cuadras will push the 22-year-old Rodriguez, but I think Rodriguez’s youth, southpaw stance, and power will be too much for Cuadras down the stretch. I’m calling for a Rodriguez victory via TKO in 10.

It’s surprising but an interesting matchup. I’ve seen good balance and composure in Jesse, which translates into a smooth mixture of offense and defense. Cuadras’ superb top-level experiences are incomparable here, and if he is in top shape, it should go his way. But if Jesse took this fight, it means that he is confident that he can win. Jesse Rodriguez by close decision.

I love, love, love the idea of ‘Bam’ Rodriguez moving up two weight classes at an opportunity to pick up the vacant super flyweight strap. Cuadras has been in wars, and while 33 is not old, he has miles on his body. Rodriguez is eleven years his junior and hungry to make a statement.
While Cuadras will try to use his experience and strength to get past Rodriguez, ultimately, I predict the 22-year-old Texan to have his hand raised in victory and might even stop Cuadras late.

I like Bam and he is clearly a special talent but Cuadras is a battle tested veteran whose only losses have come at the hands of the top of the division. Cuadras is a tricky fighter. He gave Roman hell in his first fight at 115. Cuadras might be too big, too strong, and too soon for Bam. My pick is Cuadras by unanimous decision.

You can expect fireworks when Jesse ‘Bam’ Rodriguez and Carlos Cuadras battle this Saturday night. The tough veteran Cuadras will throw bombs from the opening bell and look to make a statement against the younger Rodriguez. However, Cuadras’ give and take fighting style will be stumped by Rodriguez’s pesky jab. Rodriguez will systematically set up counter punches and combinations to break down Cuadras.

Jesse Rodriguez is a great closer, and as soon as he smells blood, he will take Cuadras out. Cuadras is a tough fighter, but his toughness will only take him so far against Rodriguez. Cuadras hasn’t fought in 14 months to add insult to injury, and he picked the wrong opponent to knock off the ring rust. And that’s precisely what Jesse Rodriguez will do to Cuadras. Rodriguez will knockout Cuadras around the 6th or 7th round and become a World Champion.

Carlos Cuadras, at first, was slated into this contest to repeat beating Srisaket Sor Rungvisai but will now have a different challenge in Jesse “Bam” Rodriguez. It will be an exciting test for Cuadras, who was last seen in the ring stopped late against Juan Estrada, which made Fight of the Year conversations in 2020. Rodriguez comes into this bout knocking out the last six in the ring, which, combined with the layoff for Cudaras, has many, including the sportsbooks picking him as the favorite here.

Feel Cuadras may be at the end of the line here in what has been a tremendous in-ring career. I expect Rodriguez to stop him late here as he will be the young, stronger fighter once the bell rings.

When I heard this fight announced, I thought oddsmakers would make this a coin flip fight, and they pretty much did. However, this went from being almost a pick ’em type fight in the betting markets to Rodriguez being nearly a 3-1 favorite in the blink of an eye. Somebody knows something. So, my pick is Rodriguez, and if I had to pinpoint a method of victory would lean to say by decision.

Jesse ‘Bam’ Rodriguez is a fighter that I have been watching for a while now, and I’ve consistently recognized the talent level. At 108, he was in beast mode. His last fight was at 110 pounds which seemed like he was looking to test the waters for a debut at 112, which was supposed to be on Saturday. Now he will be competing at 115, five pounds more than his last fight.

What are five pounds? The gap between Flyweight and Super Flyweight is huge in those smaller weight classes. Although I say that, Jesse Rodriguez is a special fighter, and although he probably won’t knockout Cuadras, he has the boxing skills to win a one-sided decision. I see this as the coming-out party for ‘Bam’ Rodriguez as he will join his brother Joshua Franco as a champion in the Super Flyweight division.

Jersey Shore Gets Supernatural As A Pet Psychic Warns Angelina About Her Cheating Husband!