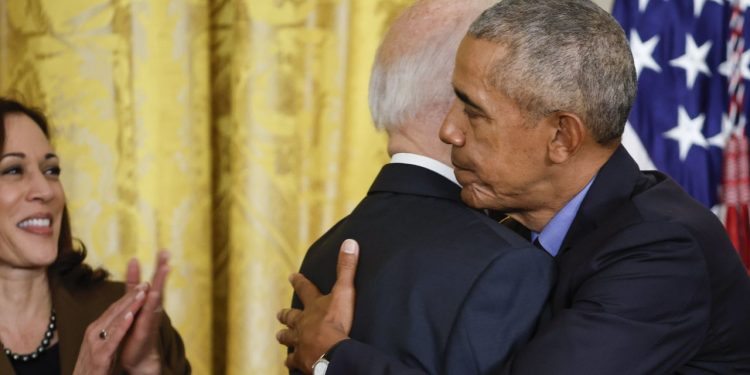 
Former President Barack Obama proved he’s still the chief executive of dad jokes on Tuesday, when he returned to the White House for the first time since Donald Trump’s January 2017 inauguration.

Obama joined sitting President Joe Biden to discuss the Biden Administration’s expansion of the Affordable Care Act — and opened his remarks by referring to his successor by his former title: “Thank you, Vice President Biden,” he said. “Vice President Harris…”

“That was a joke,” the former POTUS added, drawing laughs in the East Room and on Twitter, alike. Indeed, “Vice President Biden” began trending on Twitter
TWTR,

“That was all set up,” Obama continued, walking over and hugging Biden (who laughed and smiled) before returning to the podium and starting over with, “My President, Joe Biden.”

Obama then continued his stand-up act with a couple of jokes about “changes” he claimed Biden has made in the White House. “Apparently, Secret Service agents have to wear aviators now,” he said, referring to Biden’s signature sunglasses.

“And there’s a cat running around,” he continued, referring to the Bidens’ rescue kitty, Willow — which he said that the Obamas’ dog, Bo, “would have been very unhappy about.”

Read more: 5 facts about Willow the first cat, who has finally arrived at the White House

Biden also happily leaned into the jokes when it was his turn at the podium, introducing himself as, “Joe Biden, I’m Barack Obama’s vice president.”

He added that the two of them had just returned from lunch and, “we weren’t sure who was supposed to sit where.”

But all kidding aside, the men appeared happy to see each other and celebrate the Affordable Care Act, which was one of Obama’s signature legislative achievements while he was in office.

Read more: Biden teams up with Obama to roll out fix for Obamacare’s ‘family glitch’

Obama touched upon the challenges of pushing the ACA through during this remarks on Tuesday. “I intended to get health care passed, even if it cost me reelection — which, for a while, it looked like it might,” he said, drawing more laughs.

Obama noted that he and Biden “did a lot together,” but, “nothing made me prouder than providing better health care and more protections for millions of people across this country.”

The Biden administration announced Tuesday that it is expanding the ACA, particularly closing the “family glitch” loophole that kept about 5 million Americans from qualifying for subsidies on health insurance marketplaces.

Biden said that, “let’s be honest, the Affordable Care Act has been called a lot of things, but ‘Obamacare’ is the most fitting,” referring to “how much Barack Obama cared about getting this done.

“We both understood the ACA wasn’t about a single president or the presidency,” Biden said, later remarking that “health care should be a right, not a privilege.”