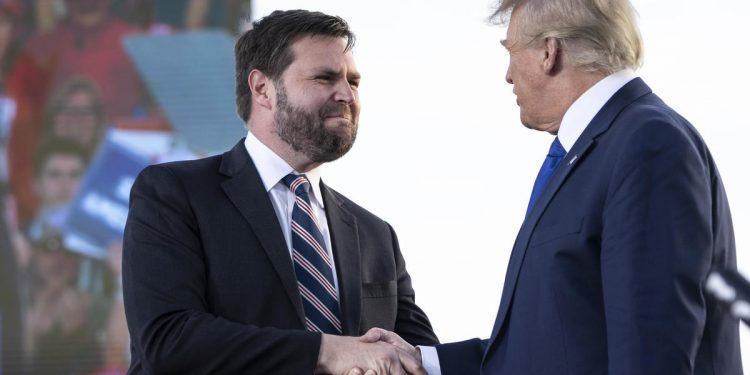 CBS News has projected J.D. Vance has won the Republican nomination for Senate in Ohio, after he soared to the lead when former President Donald Trump endorsed him.

Most of the Republicans vying for the nomination for the open Senate seat sought Trump’s endorsement, including former state Treasurer Josh Mandel, who ran as a pro-Trump politician.

Ohio has long been seen as the perennial swing state. But Trump won the state by 8 points, and once  Vance won the former president’s endorsement, his popularity  soared. A Fox News poll released last week, conducted after Trump endorsed,, showed Vance leading with 23%, over twice the 11% he had registered in a Fox News poll from early March.

Vance was once a Trump critic, but earned the former president’s endorsement by embracing Trump’s views on issues like trade, immigration and slamming big tech companies. Vance’s win on Tuesday demonstrated that Trump still holds influence over a sizable chunk of Republican primary voters.

Vance’s victory is also a win for billionaire Peter Thiel, who is becoming more influential in conservative politics. Thiel gave at least $10 million to a super PAC supporting Vance, providing financial resources for pro-Vance advertisements when Vance’s opponents were out-raising him.

Vance focused his victory speech on the upcoming fight against U.S. Rep. Tim Ryan, who is projected to win the Democratic nomination.

“Now the party that we need to unify to fight Tim Ryan, it’s our Republican Party, ladies and gentlemen. It is the party of working people all across the state of Ohio, and it needs to fight, and it needs to win it because let’s be honest — Tim Ryan, look at his TV ads, look at the things that he’s doing,” Vance said. “The guy is running as the Trump Democrat, right?”

Mandel, in conceding, said he looked forward “to voting for him in November and doing what I can to help him beat Tim Ryan,” who is projected to win the Democratic nomination.

“The  stakes are too high for this country to not support the nominee,” Mandel said.

State Sen. Matt Dolan, whose family owns the Cleveland Guardians, was the only leading candidate to say that President Biden legitimately won the 2020 election, and he was the only top contender who did not seek Trump’s endorsement. On Monday, he told CBS News that if Mandel or Vance win, “they’re going to have to do some explaining” about their baseless claims of a stolen election.

LaRose said in mid-November 2020 that it is “irresponsible” for Republicans to say the election was stolen without offering any proof. But his rhetoric has shifted since then, and the Ohio elections chief tweeted in February that “President Trump is right to say voter fraud is a serious problem.” LaRose won Trump’s endorsement in the race, although he was challenged by former state lawmaker John Adams, who called President Biden’s win “clearly not legitimate.”

On the Democratic side, CBS News projects U.S. Rep. Tim Ryan will win the Democratic Senate primary.  Ryan, of northeast Ohio has the blessing of the state’s Democratic senator, Sherrod Brown, and other mainstream Democrats against his two challengers. Though he has apparently cruised  to victory in the primary , the road to victory in November is more difficult, since national Democrats are likely to focus on flipping seats in states Mr. Biden won — or at least that are more competitive.

In Ohio’s 11th Congressional District, CBS News projects incumbent Rep. Shontel Brown again defeated Sanders surrogate Nina Turner in a rematch of the special election last year. The Cleveland-area seat is a safe blue seat, so the winner of the primary is likely to win in November.

The final day of voting comes just hours after Politico published a leaked draft opinion that suggested the Supreme Court appeared ready to overturn Roe v. Wade. It’s a development that has sent shockwaves through the nation. While draft opinions can change before a final opinion is reached and Supreme Court justices can change their minds, the news could galvanize voters from both parties.