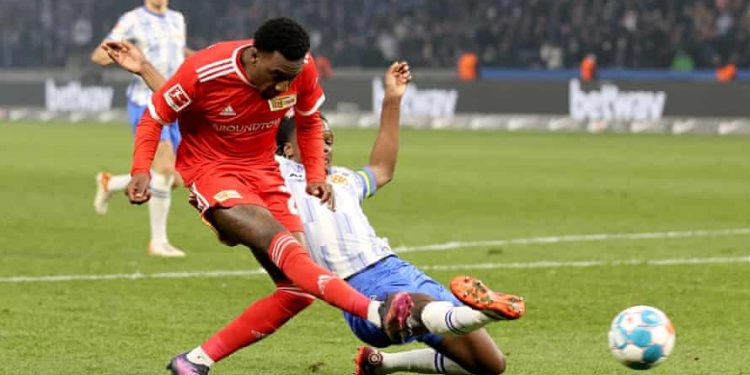 
Berlin is often overlooked as a football city. Not this weekend. For the first time in over two years the Olympiastadion was sold out and singing, but it was the only aspect of sporting life in the capital that looked different. With nearly 75,000 stuffed into the old stadium and a level of fervour that is not always the calling card of Berlin and its football, its most bankable name, Hertha, wasn’t quite up to the moment – not for the first time this season.

It was the substantial visiting support that enjoyed their afternoon, with an estimated 15,000 in the red and white of Union bathing in the glory of an emphatic derby win. “The fans made it a home game again,” said Grischa Prömel, who headed the team’s second goal and was teary after his last derby before leaving for Hoffenheim in the summer. It’s just nice to beat Hertha three times and be city champions for a reason.”

That’s right, three times. Since arriving in the Bundesliga in 2019, Union have moved from curio to irritant to, now, dominant force. Urs Fischer’s side won the first-ever top-flight derby between the two in November that year, with Sebastian Polter’s late penalty cutting through the cacophony and the flurry of pyro. There was plenty of both of those elements on Saturday evening, though less of the balance and tension that characterised that meeting two years at Stadion An der Altern Försterei, an opening statement at the top table from Union which becomes only more resonant as time goes by.

“The fact that the Köpenickers, with [Timo] Baumgartl’s own goal at the beginning of the second half, also contributed to making the third derby even more exciting this season should not go unmentioned here”, wrote Berliner Morgenpost’s Michael Färber. Baumgartl’s slip, lifting an attempted clearance onto his own head and in, was the gift that Hertha desperately needed to get back into the game. Less than four minutes later, though, the visitors were back in front via Prömel’s header. Well-taken goals on the break by Union’s Sheraldo Becker and Sven Michel gave the scoreline an emphatic sheen that it merited and after victories earlier this season in the reverse Bundesliga fixture and here in the DfB Pokal, reminded Hertha who is boss in Berlin.

For if the men in Köpenick still do their business with a certain modesty, it is debatable whether they can be reasonably described as underdogs. Now, Union have status. They know it too, and you could see from the moment the players stepped onto the Olympiastadion pitch for their pre-match walkaround on arrival. They were booed by the Hertha fans already in the stadium and the smiles on the players’ faces made it clear they were enjoying the notoriety.

Perhaps more unexpectedly, Union acknowledged it in the days leading up to the derby too. When Fischer spoke in Thursday’s press conference, he made a nod to growing expectations and ambitions. “We agreed between us,” the coach said of a chat between his players and staff, “that we’ll try and get fifth or sixth place.” He did talk – in character – more conservatively about “defending seventh,” which “could be enough for the Conference League again,” but for a man who has won titles in Switzerland, Fischer has always been painfully realistic at Union, consistently talking up avoiding relegation as the main prize and anything else as a bonus.

Last year’s European qualification had been a delightful bonus for Union. This time, it is a stated aim, even after losing attacking lynchpin Max Kruse back to Wolfsburg in January. Christian Arbeit, Union’s club spokesman casually referred to Olympiastadion as “our European stadium,” with the Altern Försterei not passed fit to host Uefa matches. The chances are it will be again next term, adding to Hertha’s indignation.

There was plenty of that among the home fans at full-time. When ultras in the Ostkurve demanded of their approaching players that they take off their Hertha shirts, it was a scene reminiscent of Schalke’s hardcore ‘repossessing’ Benjamin Stambouli’s captain armband after a hefty home defeat to Fortuna Düsseldorf in March 2019 as the club tumbled towards crisis. Those who complied were largely the younger members of the Hertha squad like teenager Linus Gechter, who have inherited an unfair amount of responsibility on the back of the club’s past mistakes. “A line was crossed that is not okay,” head of sport Fredi Bobic told Sport 1 Doppelpass on Sunday, and it is the last thing that Hertha needed as they remained second-bottom.

Maximilian Mittelstädt, one of those who removed his shirt, preferred not to detail the discussion that had gone on between fans and players – “I want to avoid a conflict at the moment” – but this was not about one game and not about the recently-appointed Felix Magath, but about a cumulative frustration, which had last boiled over after a loss in the same fixture in the Pokal, back in January, with protests at the training ground. Magath has got through a lot of valuable work to keep this fractured bunch in touch with safety, and now he must find dig deep again.

While Hertha scrap to stay in the league, Union have an extra game to look forward to – a Pokal semi-final against RB Leipzig. They can make Europe through the league or the cup. “To do it through both would be nice,” pondered Prömel. Meanwhile Magath’s reasonable attempts to put the defeat into perspective rubbed salt into the wound. “The opponents we have in the next few games are not quite at the level of Union Berlin, so there will be opportunities for us,” said the coach. With Augsburg, Stuttgart and Arminia Bielefeld next up, he’s right, but it still hurts – just like the truth of Saturday night did.