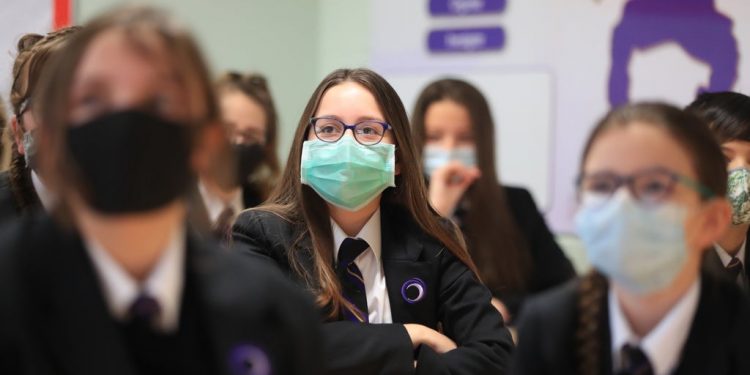 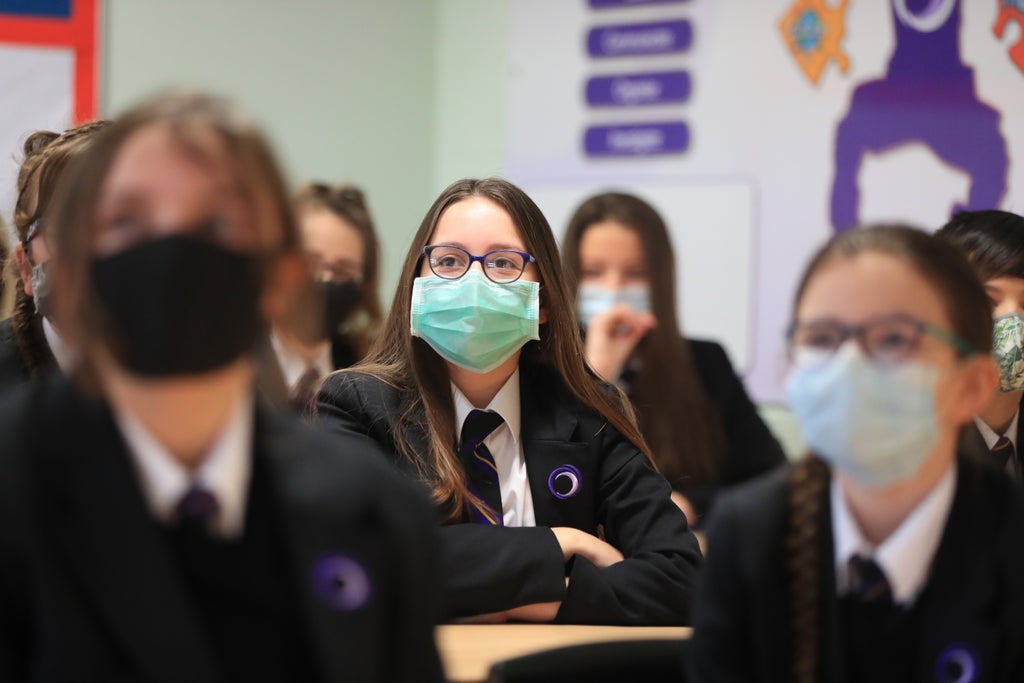 Ministers have toughened Covid guidance for schools with pupils aged 11 and over told to wear masks in classrooms again as Covid infection rates continue to rise.

The measures will be brought in for secondary schools in England from the start of term this week until 26 January – in the strongest indication yet that “Plan B” measures will also be kept in place throughout this month.

England recorded 162,572 coronavirus cases on Saturday – another record – with health leaders warning that hospitals were struggling to cope with the surge.

Chris Hopson, the chief executive of NHS Providers, which represents health trusts, warned the “next few days are crucial” in the fight to reduce the impact of the Omicron variant, and said the government “must be ready to introduce new restrictions at pace if they’re needed”.

He said staff in hospitals were working “flat out” and that the NHS was under “arguably more pressure” compared with this time last year, despite a lower number of coronavirus cases in hospital.

“It’s not something that anybody wants to do, it’s a last resort. But, when you’re facing the kind of pressures the health service is going to be under for the next few weeks, this is the kind of thing managers have to do.”

As well as tightening mask guidance, ministers have promised a further 7,000 air filtering units for classrooms, after fierce criticism of the government for failing to improve ventilation to counter the more infectious Omicron variant.

But unions warned it may not be enough to keep pupils in schools. Geoff Barton, of the Association of School and College Leaders, said: “All of this is a recognition by the government that the spring term will be extremely challenging for schools and colleges.”

“The biggest problem they face is the likelihood of high levels of staff absence caused by the prevalence of the Omicron variant.

“While schools and colleges will do their very best to minimise the impact on pupils, as they always do, there is a possibility that this will mean that some classes and year groups have to be sent home for short periods of time to learn remotely.”

Mary Bousted, of the National Education Union, warned that 7,000 filters was “completely inadequate” for more than 300,000 classrooms. The move is unlikely to quell criticism that ministers have dragged their heels, when – according to the Liberal Democrats – it would have cost only £140m to fit one in every classroom, at half the cost of the replacement for the royal yacht.

CO2 monitors have been installed instead, but critics say they only provide information on where more airflow is needed, without improving the flow itself.

Masks have been worn in communal areas in schools since November, in order to combat the rise of Omicron. Nadhim Zahawi, the education secretary, is recommending their return in classrooms as well, a measure lifted on so-called ‘freedom day’ last July.

“The prime minister and I have been clear that education is our number-one priority,” he said. “These measures will bolster our support schools as we do everything in our power to minimise disruption.”

In addition, Ofsted inspectors who are also school and college leaders will not be asked to undertake inspections, so they can “focus on their leadership responsibilities at this critical time”.

Labour is accusing the government of failing to deliver jabs to over-12s, 15 weeks after they were approved – leaving nearly 2 million 12 to 17-year-olds unvaccinated.

Meanwhile, all public sector leaders have been told to draw up contingency plans for up to a quarter of staff being off work as Omicron continues to sweep across the country.

Steve Barclay, the Cabinet Office minister, will be chairing “regular meetings” with ministers to ensure “robust” plans are in place to cope with staff absences.

Public sector bosses have been told to test plans “against worst case scenarios of workforce absence scenarios of 10 per cent, 20 per cent and 25 per cent”, the department said.

Sajid Javid warned on Saturday that the country must learn to live with Covid, writing in the Daily Mail that “curbs on our freedom must be an absolute last resort”.