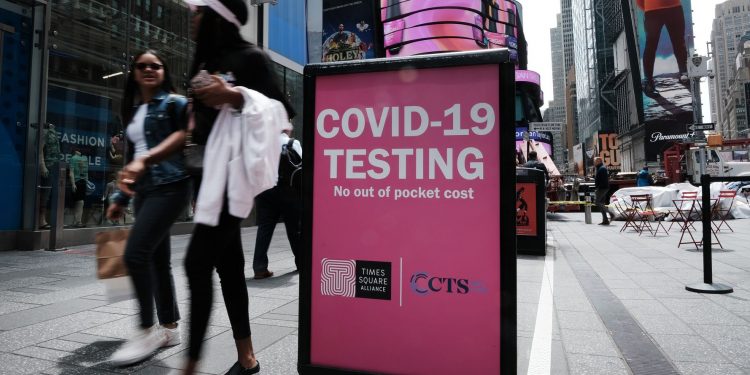 A coronavirus subvariant called omicron BA.2.12.1, first spotted in upstate New York, is likely to become the dominant strain in the United States in the coming weeks, according to The New York Times, as coronavirus cases again trend upward in the country.

While the BA.2 variant continued to drive the majority of infections, making up 61.9% of total cases for the week ending April 30, BA.2.12.1 has been increasing steadily. The subvariant accounted for 36.5% of cases last week, up from 26.6% the week ending April 23, according to the Centers for Disease Control and Prevention.

While cases are rising across the U.S., we are far from the January peak attributed to the original omicron BA.1 variant.

Omicron subvariants have been growing “in part because they have become more difficult for our immune system to ‘see,’” Dr. Eric Topol, a professor of molecular medicine at Scripps Research, wrote in an op-ed for the Los Angeles Times published Wednesday.

“That means even the millions of people who had omicron BA.1 infections earlier this year are still vulnerable to infection with BA.2.12.1, especially if they’re unvaccinated,” Topol writes. “That will promote spread and prolong the pandemic.”

“It appears it might have a transmission advantage of about 25% over the BA.2 subvariant,” Walensky said of the new strain. “Additional evaluation is currently underway to understand the impact of BA.2.12.1 on vaccine effectiveness. But importantly, we continue to believe that those who are vaccinated and especially those who are boosted continue to have strong protection against severe disease, even from BA.2.12.1.”

Last month, New York state warned New Yorkers of the emergence of BA.2.12.1 and another omicron subvariant and their spread in the community.

“While these subvariants are new, the tools to combat them are not,” state Health Commissioner Mary T. Bassett said on April 13. Those tools include vaccines and boosters, along with testing and wearing a face mask indoors.

A rise in infections pushed New York City into the CDC’s medium COVID risk level on Monday. So far, the city has not imposed new restrictions, but face masks in indoor places could return if the risk level increases further to high, according to NBC New York.

Face masks have been the subject of fierce national debate. A Donald Trump-appointed judge voided a federal mask mandate for travel last month, saying the rule exceeded the CDC’s authority.

The CDC though issued a statement on Tuesday saying it still recommends that passengers age 2 or older continue to mask up on public transportation, including airplanes.

Meanwhile, most major U.S. airlines, including United, Delta and American, have removed their mask requirements. Public transit agencies in New York and Los Angeles continue mandating the use of masks, while systems in Philadelphia and elsewhere have made masks optional. Amtrak also dropped mask requirements.

Pfizer said Tuesday it would update U.S. regulators on the effectiveness of its vaccine on young children under 5 years old in late May or early June.