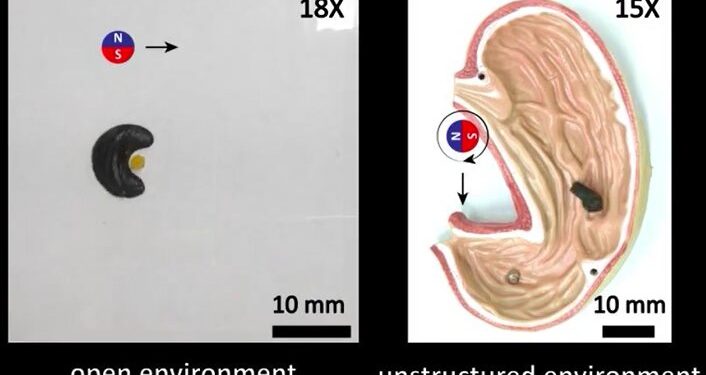 
A team of researchers affiliated with a host of entities in China has created a type of magnetic slime that can be configured on the fly to perform a variety of robotic tasks. In their paper published in the journal Advanced Functional Materialsthe group describes their slime, possible uses for it and the actions they have taken to make it less toxic.

Over the past several years, scientists have developed a variety of soft robots meant for possible use in the human body as therapeutic devices. In this new effort, the researchers have added to that list a type of slime that might one day be used to retrieve material swallowed accidentally or to repair internal injuries.

The slime is a mixture of neodymium magnet particles, borax and polyvinyl alcohol. The result is a dark brown blob that responds well to a magnetic field. Using that field, engineers were able to configure the robot into a torus, a half-torus, a pancake, a sphere and a straight line. They demonstrated in a YouTube video configurations that could be used to manipulate objects. The half-torus, for example, could be used to corral one or more objects and push them in a desired direction. And they cleverly used the pancake shape to bind two pieces of wire together by rolling them into the robot body. They note that a similar technique could be used to envelop an object to be moved to a desired location.

The researchers also note that the slime is toxic and thus not suitable for use in the body. To overcome that limitation, they applied a silica coating, which, they noted, would last only a short time.