One Killed, Multiple Others Injured in Shooting at Dallas Concert Venue – NBC 5 Dallas-Fort Worth 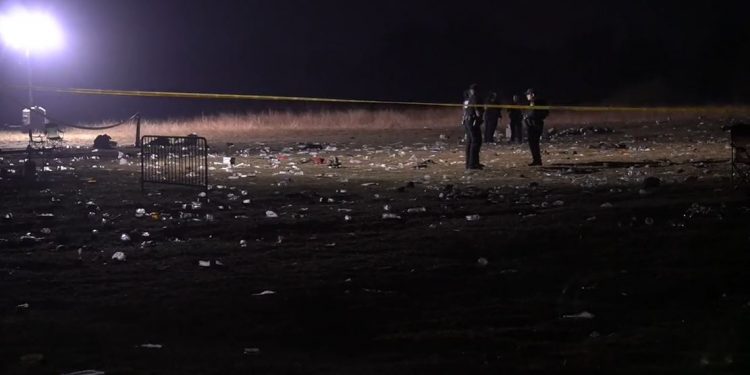 One person is dead and multiple others are injured after a shooting at a concert in Southern Dallas on Saturday night.

According to the Dallas Police Department, officers responded to a shooting at a trail ride and concert venue in the 5000 block of Cleveland Road at approximately 12:13 a.m.

As of Sunday morning, officers have confirmed that 11 people were shot and were subsequently transported to area hospitals, police said. One victim is in critical condition, and the others are in stable condition.

According to police, one person was pronounced dead at the scene. Kealon Dejuane Gilmore, 26, was found lying near the stage with a gunshot wound to the head, police said.

Police said three of the individuals shot were minors.

The investigation into this incident is ongoing, police said.

This is the second shooting of this severity to occur in Southern Dallas in the last three weeks.

At least 10 people were injured on March 19 when someone opened fire outside an event center in Dallas, police said.

The shooting occurred in the 5200 block of Botham Jean Boulevard at a venue called The Space Dallas.

Police said a crowd of more than 1,000 people were at the venue, both inside and outside, when someone fired at least 30 shots, hitting at least 10 people.

“Last night’s violence was horrific and unacceptable. I am praying for the victims, and I look forward to our police department bringing those responsible to justice,” Mayor Johnson said. “Public safety remains our top priority, and I will be conferring with Police Chief Eddie Garcia to see what more can be done to stop this kind of violence in our city.”

Another mass shooting occurred during the early morning hours of April 3 in Sacramento, California.

Police are searching for at least one suspect in connection with a shooting in downtown Sacramento that claimed six lives and left 10 other people injured.

Anyone with information is asked to contact Homicide Unit Detective Christopher Anderson at 214-671-3616 or c.anderson@dallascityhall.com.

Jenelle Evans: Did She Just Finally Admit to Being an Alcoholic?!

Jenelle Evans: Did She Just Finally Admit to Being an Alcoholic?!