With help from Leah Nylen and John Hendel

— Coons says: In his first interview discussing his tech agenda at length, new Senate Judiciary Privacy and Technology Chair Chris Coons dishes on his priorities this Congress — and the Silicon Valley players who may soon need to answer to his panel.

— Thank you, next: A Texas federal judge seemed disinclined to transfer the state’s antitrust suit against Google from Plano to San Francisco — which would have given the search giant, already under enormous scrutiny in Washington, a home court advantage.

— Hands off our spectrum: House Transportation Chair Peter DeFazio took his concerns about auto safety airwaves up the chain to Pete Buttigieg just days before he’ll grill the new Transportation secretary at a hearing.

Got a news tip? Write me at [email protected], and follow @Ali_Lev on Twitter and @alexandra.levine on Instagram. An event for our calendar? Send details to [email protected]. Anything else? Team info below. And don’t forget: Add @MorningTech and @PoliticoPro on Twitter.

The internet has changed a lot in the 25 years since lawmakers last passed comprehensive internet regulations. It’s time for an update.

See how we’re making progress on key issues and why we support updated regulations to set clear rules for addressing today’s toughest challenges.

COONS TELL-ALL: WHAT’S AHEAD FOR TECH THIS CONGRESS? — The Delaware senator has big plans for Silicon Valley. As the new chair of the Senate Judiciary subcommittee on privacy and technology — and a close friend of President Joe Biden — his action on tech is likely to be influential both across Congress and within the new administration.

In his first interview discussing that agenda at length, Coons shared with POLITICO how he plans to hold social media platforms accountable this Congress (he’s already considering hauling the CEOs of Facebook and Twitter before his panel) — even as the tech companies try to go it on their own by self-regulating. Some highlights below; Pros can read the full conversation here.

— Tech is evolving faster than Congress can keep up, so some self-regulation is a good thing: “Congress regulates the internet and social media rarely, and when it does, whatever it puts in statute often has ended up being stuck or set in place for years,” Coons said. “And in an area where technology is moving fairly quickly, sometimes oversight hearings, letters [and] conversations with the leaders of major social media companies can result in those companies demonstrably changing their practices faster than we can legislate.”

— But self-regulation can only go so far: “I’ve been pleasantly surprised at the progress I’ve been able to make with bipartisan letters and with conversations and hearings with technology leaders. … At times, having publicized congressional attention to the consequences of technology has led to voluntary actions by industry,” Coons said. “But there are limits to how much we can accomplish through that kind of a technique. I really think it’s critical that the Senate get up to speed, get engaged and meaningfully legislate in this area.”

— If it doesn’t, Congress risks ceding ground to states and other parts of the world on privacy: “It concerns me that we have not pulled together across committees and across parties to come up with data privacy legislation that would reflect our role as the leading free and open society in the world,” Coons said. “If we want to retain that place, we need to be at least as robust in protecting the data privacy of our citizens as the Europeans are.”

TECH CEOS JOIN ‘DISINFORMATION NATION’ — The House Energy and Commerce Committee announced that its virtual hearing Thursday with Facebook’s Mark Zuckerberg, Google’s Sundar Pichai and Twitter’s Jack Dorsey would be called “Disinformation Nation: Social Media’s Role in Promoting Extremism and Misinformation.” It’ll be the CEOs’ first time testifying before Congress since the Jan. 6 assault on the Capitol, which was organized and inspired in part on their platforms.

GOOGLE ACCUSES TEXAS OF ‘SHOOT FIRST, ASK QUESTIONS LATER’ — A Texas federal judge didn’t rule Thursday, but he made several statements critical of Google’s attempt to move Texas’ antitrust suit to California. “Google’s filings have a lot of broad statements,” U.S. District Judge Sean Jordan said at a hearing Thursday, “but not a lot of drilling down and detail” about why the suit should move.

— Google’s attorney Eric Mahr urged Jordan to transfer the suit from Plano, Texas, to San Francisco, which he called “clearly more convenient.” The only solid reason Texas has given for filing the suit in Plano is to get the case to trial as fast as possible, Mahr said. The states’ “desire to rush the case to trial is not a reasonable basis to deny transfer,” he said, alleging that Texas was engaged in a practice of “shoot first, ask questions later.”

— Ashley Keller, an attorney for Texas, rejected the idea that Texas “rushed” the case, though he acknowledged officials want to move quickly since Google has “tentacles throughout the U.S. economy.” While class actions are pending in California, Keller said, those plaintiffs had “no choice but to sue in Google’s backyard” because a clause in Google’s contracts requires it. “Google has no right to do that to sovereign entities,” he said, noting that 15 states and territories are involved in the Texas suit. “This is the case that has the center of gravity. Everybody should come here.”

FTC’S PHILLIPS EXPLAINS HIS FACEBOOK VOTE — When the FTC sued Facebook in December, two commissioners dissented — and abiding by FTC tradition, neither said why they opposed the suit. On Thursday, House Judiciary Antitrust Chair David Cicilline (D-R.I.) asked Republican Commissioner Noah Phillips to spell out why he voted against the antitrust suit.

— Phillips defends his RSVP: The Instagram and WhatsApp deals “were brought to the attention of the Federal Trade Commission before I was there, the better part of a decade ago,” said Phillips, who joined the agency in 2018. “The longer you wait, the more investments the company makes and I think that presents a real issue. I can’t undo the fact that the agency did what they did.”

While acknowledging the FTC can challenge transactions after the fact, Phillips said he was concerned about harming “the integrity of the process” by reversing the agency’s earlier decision. “I wasn’t there when this happened,” he said. “But it did happen.”

— More from the hearing, ICYMI: Here’s what acting FTC Chair Rebecca Kelly Slaughter had to say. 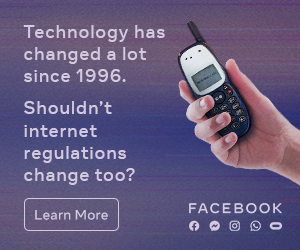 DEFAZIO BRINGS AUTO AIRWAVES CONCERNS TO BUTTIGIEG — The House Transportation chair is raising concerns about the FCC’s November vote on 5.9 GHz — which would carve up this band of auto-safety airwaves to include a cut for Wi-Fi. The Oregon Democrat revealed in a letter Thursday to acting FCC Chair Jessica Rosenworcel that he had brought up the issue with Buttigieg, who is testifying before DeFazio’s panel next week.

— DeFazio is “deeply disturbed” that the FCC last year ignored DOT concerns and “would welcome a discussion with [Rosenworcel] directly,” he told her, hoping she brings a “more measured approach.” FCC staff in November dismissed such concerns and cited productive talks with other administration officials in Commerce on the carve-up.

TAKE 2 ON TRUMP-ERA 5G BUILDOUT ORDER? — If a federal appeals judge gives a green light, the FCC will have another six months to potentially re-litigate a fight over 5G infrastructure that dominated much of last summer.

— Rewind. What? The wireless industry had then cheered that Trump-era vote — which allowed carriers to more easily place 5G equipment on poles — but several local governments sued. FCC lawyers were originally set to respond this past week, but they are instead asking the court to hold the case “in abeyance” for six months.

The lawyers point out that the make-up of the agency has since changed, and now they want “the opportunity to consider how to proceed in this case, including whether to revisit some or all of the actions taken in the Ruling.” (Democrats had originally objected, saying local governments needed more time to weigh in.) Absent that sign-off, FCC lawyers add, they want three days to formulate a response.

Building the Biden administration: Xavier Becerra, who took on some of Silicon Valley’s biggest tech companies as California attorney general, was confirmed on Thursday to lead HHS. … Biden is expected to nominate former Sen. Bill Nelson (D-Fla.) to lead NASA.

Former TikTok CEO Kevin Mayer has joined the board of the digital marketing agency Tinuiti.

Just when you thought you might be remote forever: Google said it would “spend $7 billion this year on expanding its footprint of offices and data centers across the U.S., including pouring $1 billion into its home state of California,” WSJ reports.

Eyeballs watching emoji: Google’s privacy-oriented plan to phase out “cookies” is raising eyebrows at the Justice Department, which is questioning whether the change will hurt smaller competitors in the online advertising space, Reuters reports.

Facebook on Atlanta: “Facebook says it will remove any posts that celebrate the recent shooting in Atlanta or support the suspected shooter,” The Verge reports.

Opinion: “Airbnb has a hate group problem, too,” tech columnist Kara Swisher says in NYT. “But it’s not the same as Facebook’s.” Here’s her conversation with Airbnb CEO Brian Chesky.

Come one, come all: Twitter says it wants your input on how to handle global political leaders on the platform — but don’t expect that to lead to a reinstatement of former President Donald Trump.

Rallying for net neutrality: Mozilla, Dropbox, Eventbrite, Reddit, Vimeo and Wikimedia are among the tech players that signed onto a new letter asking the FCC to reinstate net neutrality.

It’s been 25 years since comprehensive internet regulations passed. But a lot has changed since 1996.