OneWeb paid $49.3m in fees to bankers, lawyers and other advisers acting for its original shareholders as part of the $1bn deal in which the UK government and India’s Bharti Global rescued the satellite internet company from bankruptcy last year.

The disclosure came in audited accounts published on Tuesday. The sale agreement “required the Company to fund the selling costs of the former shareholders of OneWeb Communications”, the accounts stated.

Although the advisers were not named, Guggenheim Partners, the New York investment bank, and US law firm Milbank were among those who advised investors on the transaction, according to a person with knowledge of the situation.

The annual report also revealed that OneWeb incurred a $58.3m operating loss in the 12 months to the end of March. There was no comparison provided with the previous year.

On a brighter note for the investors who took OneWeb out of bankruptcy, the group recorded a $430.4m gain on the fair value of its assets compared with the bankruptcy price tag.

OneWeb, founded almost a decade ago, was a pioneer in space-based internet services, but experienced difficulties after several delays prompted its biggest shareholder, SoftBank, to withhold $2bn in new funding to develop its satellite constellation. The group entered Chapter 11 bankruptcy protection in the US in March last year.

However, since its $1bn rescue by the UK and Bharti, the company has secured $2.7bn in funding from investors including Eutelsat, the European satellite operator, Hanwha, the South Korean conglomerate, and even SoftBank. The recent funding rounds are estimated to have valued OneWeb at more than $3bn. 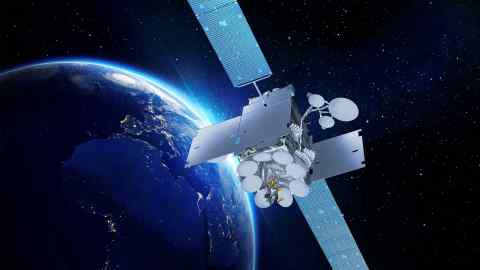 The group has 358 satellites in orbit and intends to launch a limited commercial service this year. It expects full global service to be up and running by late 2022, when it will have launched all 650 of its planned low-orbit satellites. OneWeb is targeting annual revenues of more than $1bn within five years of full deployment.

However, OneWeb is facing fierce competition from Elon Musk’s SpaceX, which this weekend launched 53 more satellites into its Starlink constellation, taking its total in orbit to almost 2,000.

Neil Masterson, OneWeb chief executive, said the company’s approach to space-based internet services was different from that of SpaceX, pointing out that it offered extra capacity to existing service providers rather than targeting customers directly.

“Numbers of satellites do not equate to progress,” said Masterson. “Our approach is to work with the existing ecosystem. I feel confident in our ability to compete. As long as we stay very very focused on meeting customer needs these things will take care of themselves.”