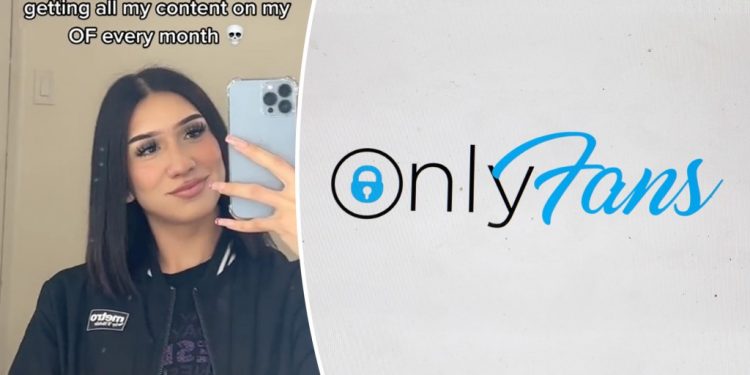 Family ties nearly unraveled for an OnlyFans star named London when she realized her father had subscribed to her channel and had been faithfully watching her saucy content on a monthly basis.

“Me realizing *the Hott3st Daddy* user was my dad getting all my content on my [OnlyFans] every month,” said London, from San Diego, California, in the captions of her now-viral TikTok testimonial.

“Real story,” she titled the eye-popping post, which has raked in more than 85,000 views and more than 300 comments from concerned critics.

“Bruh this has to be a crime, ain’t no way,” inked one perturbed commentator. “Do you continue to talk to your dad after finding something like that out?” another questioned.

“You know what’s horrible a lot of men do not touch their kids but fantasize about it,” asserted a viewer. “That is sick AF… I’m so sorry girl I can’t imagine how you just feel,” said another.

One observer wrote: “I hope you guys don’t live under the same roof,” to which London replied, “What if we do,” and punctuated the remark with the skull emoji.

But a small faction of her less judgmental followers countered the dad comments with praise, applauding the woman’s dad for supporting his daughter’s online business venture.

“Does that mean he is a good or bad dad? Sounds supportive to me,” said a daddy defender. “We love a supportive father,” chimed another, using several handclap emojis to emphasize their excitement.

London did not immediately respond to The Post’s request for comment.

In January, an OnlyFans model known as Karla Ramirez published a viral video, shaming her anonymous father for not only subscribing to her sexy profile but also offering to pay her money to “play” with herself on camera.

“When my DAD, yes my DAD has been buying my [OnlyFans] content through NOT ONE but TWO accounts, and was a personal client of mine on both accounts for over a year,” said Ramirez in the text of her trending clip, which amassed over 16.8 million views.

“And the only way I found out [who he was] is because he had called me to ‘play with myself’ for $150, and I could hear my mom in the background talking on the phone.”

In a subsequent post, she claimed her father had been “sexually attracted” to her since she was “really young,” and recounted several incidences in which the man sexually abused her during childhood.