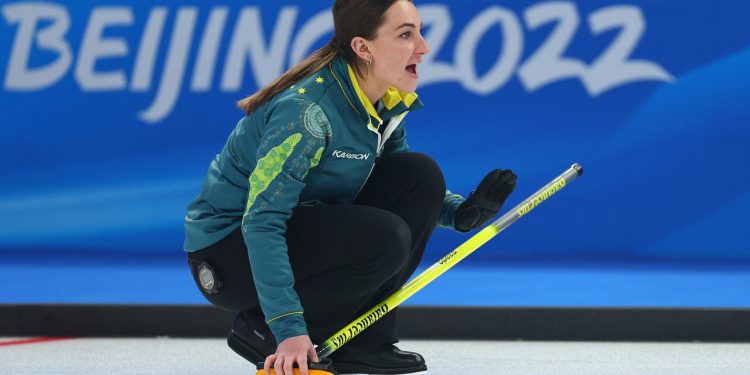 
A Winter Olympics overshadowed by rights concerns and Covid will officially begin in Beijing on Friday (11pm AEDT) with an opening ceremony at the “Bird’s Nest” stadium.

The distinctive lattice-shaped arena took centre stage at the 2008 Games — seen as China’s coming-out party to the world — and will do so again as Beijing becomes the first city to host both a Summer and Winter Olympics.

But there’s plenty of action happening around the Games today before the Ceremony begins, with a Japanese star ruled out of the Olympics following a massive snowboarding crash – and one Aussie threatening to pull off a remarkable Top 10 finish.

The Games will officially run from February 4 to 20, and be followed by the Winter Paralympics from March 4 to 13.

We’ll have all the action covered from the Opening Ceremony to the events themselves right here.

Australia’s first-ever curling Olympians Tahli Gill and Dean Hewitt are on the brink of elimination after another heartbreaking loss in the Mixed Doubles.

With 10 teams competing and the top four qualifying for the semi-finals, the 0-3 Aussies needed a big day against top contenders Sweden and Great Britain.

But they fell just one point short of a miraculous comeback against heavyweights Sweden to begin the day.

Then the Aussies stormed back and took two points in the final end to force extras against the Brits but then lost 9-8 in overtime.

Sitting 0-5 the Aussies must realistically win all of their remaining matches and then hope for the best to qualify for the semis.

Japanese snowboarder Rina Yoshika has been ruled out of the Beijing Olympics after a horror crash in practice on Thrusday.

It took 20 minutes for an ambulance to remove her from the snowboard slopestyle course after she injured her spine coming off a jump on the course at the Genting Snow Park.

The Japanese Olympic Committee said the 22-year-old had suffered a spinal injury but was not paralysed, and said she will not compete in the slopestyle or Big Air events.

Australia’s first-ever three-time Olympic luge competitor Alexander Ferlazzo has made a huge statement of intent as he looks to smash his own Australian record at the Games.

Ferlazzo made Australian history by claiming a best-ever result of 28th in the 2018 Olympics, before taking a 16-month break from the sport during the coronavirus pandemic.

Now he’s returned to action, and is in top form as he looks to smash his own record.

After four practice runs on the track, Ferlazzo’s best was sixth out of his group of 18 athletes, with 35 competitors overall.

But on Friday, in his fifth practice run, Ferlazzo scorched down the ice at a top speed of 130.4km/h to finish in 58.300s – a remarkable improvement of over half a second on his previous best time of 58.878s.

In a combined session with all 35 athletes, his time was good enough for 12th overall. Conditions were faster than in previous days, with five athletes going under 58 seconds.

Luge competition based on the combined times across four runs (two on Saturday night, two on Sunday night), meaning consistency is crucial – and after his first practice run, all five of his next practice runs have been under 59 seconds.

“I’m looking at putting together four runs that I’m proud of, first of all, that’s the most important thing,” he added of his aim for the competition.

“Then where I’m at the end of the event of the competition, I’ll be happy if I can put those clean rounds together. The way the season’s been progressing, I think a top-15 finish is a reasonable goal, and that’s what I’ll be trying to achieve.”

Some spectators will be present at the opening ceremony but it is unclear how many and, like sports events at the Games, tickets were not sold to the general public because of the pandemic.

The ceremony is the mastermind of acclaimed Chinese film director Zhang Yimou, who was behind the 2008 extravaganza, and will take around two hours.

Zhang has promised a “totally innovative” show but conceded that the pandemic and freezing weather will limit its scale compared to the Summer Games, when 15,000 performers took part in a lavish gala featuring opera singers, acrobats and drummers.

This time there will be about 3,000 performers and themes will include “environmental protection and low carbon emission”, Zhang previously told state media.

But China’s assertion that these will be a “green Games” has been challenged by some experts because they will take place in one of the driest places in the country and on almost entirely man-made snow.

It is the first time Australia has deployed dual flag-bearers at a Winter opening ceremony. But it comes after basketball star Patty Mills and swimmer Cate Campbell carried the flag at the Tokyo Summer Olympics

Kerry and Peel are both competing in their third Olympic Games.

The Beijing Winter Olympics will be broadcast in Australia on free-to-air TV on Channel 7.

You can also watch on the streaming platform 7 Plus.