Opinion: If a Roe v. Wade reversal is pro-child, where’s the help for child-care costs? 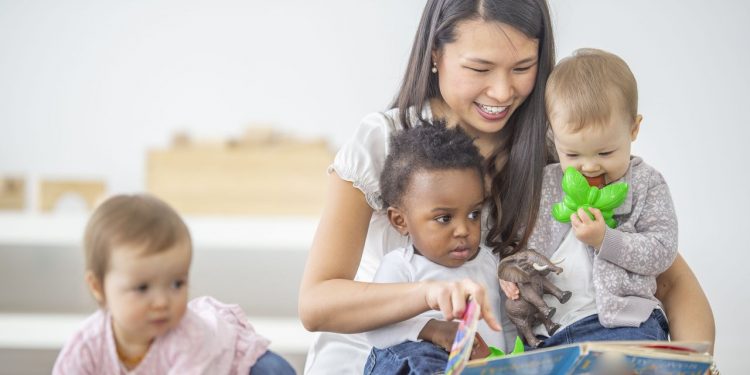 The leaked intentions of a conservative-majority Supreme Court to ban legal abortion has many Americans understandably worried about reproductive freedom and access to quality healthcare.

But the pending rollback of decades-old protections also serves as a reminder that the federal government and most U.S. states provide little spending and other support for child care — safe, accessible daily care for the minors in working households. The stinginess is stark when compared to other wealthy nations whose economies compete with the U.S.

The private sector, in turn, is all over the board with child-care benefits. Some workplaces understand that having happy workers pays off and provide benefits like on-site child care and generous paid leave. But part-time workers are less likely to enjoy such benefits, and are given few options for extending part-time positions into career moves given the cost of care.

Read: ‘Companies can no longer look the other way’: Is it time for corporate America to take a stand on abortion?

The high court intends to strike down the landmark Roe v. Wade decision legalizing abortion, according to a report late Monday by Politico, which obtained a leaked draft majority opinion of the pending ruling. Reversing Roe v. Wade would end federal protection of abortion rights and open the door, many believe, for less contraception access, allowing each state to decide on the legality of such care.

It is a huge political change from settled law of the past 50 years, and one with election implications. A majority of Americans say abortion should be legal in most or all cases, though they vary on specifics.

And: What percentage of Americans support Roe v. Wade? How Americans really feel about abortion, according to polls

For many women, and men, it’s becoming ever clearer that “child care” drops off noticeably as soon as conception — the point a few weeks into a typical 40-week human-gestation period that seems to be at the core of the staunchest argument against termination of an unwanted or risky pregnancy.

That’s the magic moment for the “pro-life” — often translated to “pro-family” — side of the legal abortion argument, regardless of what life-saving, or even life-nurturing, benefits babies and their families might need in the months and years that follow.

“For a nation seemingly set on making people have babies, we sure don’t want to invest in them,” tweeted Heidi Stevensa mother and former Chicago Tribune columnist, now an independent parenting-issues writer.

The 0.2% of U.S. gross domestic product invested in child care for children aged 2 and under amounts to about $200 a year for most families via a once-a-year tax credit for parents who pay for care.

And one in four women in the U.S. returns to work within two weeks of childbirth, according to the advocacy group Paid Leave US (PL+US). The American College of Obstetricians and Gynecologists recommends women take at least six weeks off work following childbirth.

The vagaries of prenatal and infant care in a U.S. that relies largely on private insurance have received increased attention, and could use more study and solutions.

Fifteen of the 21 presumably “pro-family” states prepared to ban or severely restrict abortion rank in the bottom half of states in the overall assessment of children’s well-being calculated each year by the nonpartisan Annie E. Casey Foundation, a philanthropic group focused on child well-being. Mississippi and Texas, the states whose restrictive new abortion laws have triggered the Supreme Court’s reconsideration of the issue, rank dead last and fifth from the bottom, respectively.

Read: ‘I’m thankful that I had my abortion’: Supreme Court will hear challenge on Mississippi abortion law — here’s what’s at stake

And: Biden calls for voters to ‘elect pro-choice officials this November’

But it’s the shock of one particular area of parenting — child-care costs — that can’t be ignored in the economic conversation around reproductive rights. That’s true especially relative to wages and salaries. The availability of safe, reliable care must also become increasingly flexible as the workplace becomes more fluid post-COVID-19. In fact, COVID-19 laid bare just how costly and career-ending child-care strains can be, especially if families face other burdens.

For starters, having children is expensive, typically costing almost $15,000 a year for a middle-class family. For low-income working families, child-care costs alone can eat up over a third of earnings.

By one count, families across the U.S. spend an average of $8,355 a year on child care per kid. Parents, on average, spend a little over $750 per child per month during the school year and an average of $834 for summer child care, according to a survey conducted by YouGov on behalf of Bankrate.

By another measure, in 2019, prior to the pandemic, families spent an average of $9,200 to $9,600 per child on child care, according to Child Care Aware of America, which advocates for access to affordable child care. The nonprofit calculates that families headed by married couples spend about 10% of household income on child care, while single parents spend about 34% of their income.

Child-care expenses can vary dramatically by location and age of the child, and whether care includes educational curriculum or other add-ons, which can drive up the average cost. For many families, high-quality child care is not an option: There are not enough child-care providers to meet the demand, and providers are leaving the field in record numbers, Child Care Aware says. This particularly affects families of color, families living in rural areas and children with functional needs.

Read: How American politics created a tribal culture on moral issues: ‘40 years ago, if I told you that this person supports abortion, you wouldn’t be able to tell how they felt about taxes, health care and immigration’

Even “pro-family” efforts to keep one or more parents home longer after a baby is born have found only limited take-up.

President Biden’s Build Back Better spending package sought to provide all U.S. workers with 12 weeks of paid family and medical leave, and later versions of the now-stalled bill cut that proposal to four weeks before omitting it entirely. Opponents of including the paid-leave provision, including Democrat Sen. Joe Manchin of West Virginia, said a broad spending bill wasn’t the right place for the policy.

Many cite the burden on businesses and the risk that those costs will impede pay increases. But a study distributed last year by the National Bureau of Economic Research suggested that taxpayer-funded paid family leave does not harm employers and actually can improve their experience of dealing with workers’ absences.

‘Attacks on birth control are escalating’

The Supreme Court said Tuesday that while the leaked draft was authentic, it did not represent its members’ final position on the issue. The high court is expected to announce its Roe decision within the next two months, ruling on a case brought by Mississippi that seeks to ban most abortions after 15 weeks of pregnancy. The state has also asked the court to overturn Roe entirely.

“Roe was egregiously wrong from the start,” Justice Samuel Alito wrote in a draft of the majority opinion obtained by Politico and posted online. “We hold that Roe and Casey must be overruled,” Alito continued, citing also a 1992 case that affirmed the 1973 Roe decision.

The reversal of Planned Parenthood v. Casey could roll back women’s privacy around reproductive rights and impose longer wait periods after consulting a clinic. Already, the court had ruled that private interests could restrict birth control and other care in health plans — all developments that add to the suspicion over how “pro-child” this historic move would be.

“Given their focus on limiting access to abortion, you might assume that conservative politicians would be for policies that help women avoid unintended pregnancies,” writes Michele Gilman, a law professor at the University of Baltimore, in a commentary piece for The Conversation.

“Conservative attacks on birth control are escalating, even though 99% of sexually active women of reproductive age have used some form of it such as an intrauterine device, patch or pill at least once,” Gilman added.

In addition to its widely recognized health and autonomy benefits for women, contraception directly boosts the economy. In fact, research shows access to the pill is responsible for a third of women’s wage gains since the 1960s.

And that benefit doesn’t stop with women.

Children born to mothers with access to family planning benefit from a 20% to 30% increase in their own incomes over their lifetimes, as well as higher college completion rates, according to a 2013 paper circulated by the National Bureau of Economic Research.

For now, absent more attention from Washington and other leaders to the actual care of children, access to contraception and other reproductive services may be all that households trying to balance healthy careers and healthy families — with children cared for both inside and outside the home — can rely on.