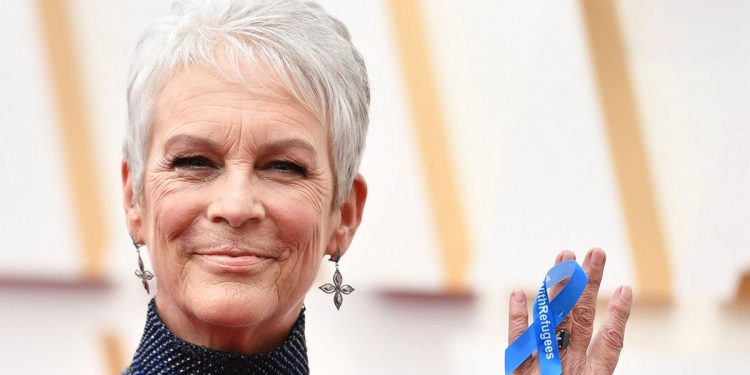 Actress Jamie Lee Curtis showed her support for Ukraine as she wore a blue ribbon during a red carpet appearance at the Oscars.

The Freaky Friday star, 63, was amongst other celebrities who are standing by refugees worldwide, amid the ongoing crisis as Putin’s Russia continues to invade the country.

The United Nations Refugee Agency distributed the ribbons to the stars to wear before and during the 94th Academy Awards.

Anadil Hossain, Principal Communications Advisor for the UN High Commissioner for Refugees, said to ShowBiz411: “This year’s Oscar-nominated films include some powerful stories centered on the themes of refugees, displacement, home and belonging – Encanto, Flee, Three Songs for Benazir, Belfast, and Dune – at a time when the world is witnessing the largest refugee crisis since WW2.”

Jamie Lee Curtis at the Oscars
(

The ribbons include the hashtag #withtherefugees to show support not only for those fleeing Ukraine but the 85million people displaced around the world.

Anadil added: “Artists have been wanting to show their solidarity for Ukraine, and we wanted to ask them to extend this support to the almost 84million people forced to flee. Whenever. Wherever.”

Hollywood legend Jamie was one of the first stars to make it to the red carpet tonight, sparkling in a beaded midnight blue dress.

Other stars including Vanessa Hudgens and Nicky Hilton led the glamour on the red carpet.

Actress Vanessa, 33, smouldered in a slinky sequinned black cut-out dress as she posed for photos.

She showed her support for Ukraine
(

She wore a gorgeous long gown
(

In contrast, Nicky Hilton opted for a pale pink flowing gown as she showed off her baby bump.

Also pretty in pink was Lily James, who looked gorgeous in a strappy lace dress that pooled at her feet.

The ceremony will take place on Sunday, 27 March, commencing at 8pm Eastern Time.

For those wanting to tune in from the UK, the awards will begin at 1am on 28 March. Like most years, it will be lasting around three to four hours.

The star-studded event is available to watch on sub-channel Sky Cinema Oscars for UK fans. The coverage can be streamed online through NOW with a NOW Sky Cinema Pass.

US fans can watch the event on ABC.