Oscars Show Where We Are Apparently Assaulting People Now – Deadline 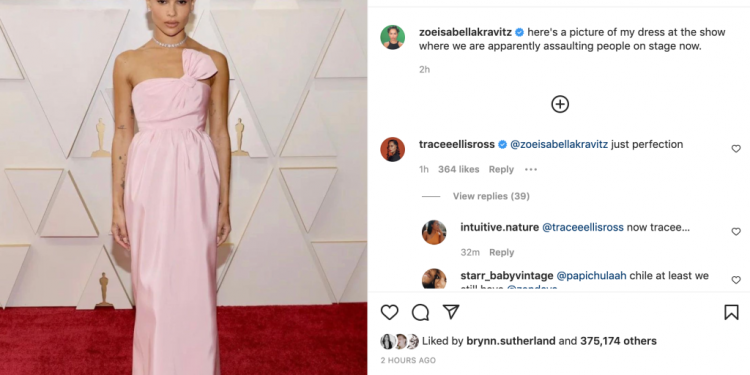 
The Batman star Zoë Kravitz turned the standard celebrity post-event social media showcase of her red carpet looks into a not-so-subtile protest of the Oscars and Will Smith’s actions there.

In an update to her account this afternoon, Kravitz captioned a photo of herself in the pretty pink dress she wore to the ceremony with: “here’s a picture of my dress at the show where we are apparently assaulting people on stage now.

Moments later, she followed up with an image of herself in a form-fitting, floor-length white gown at the Vanity Fair Oscar Party and the caption, “and here is a picture of my dress at the party after the award show -where we are apparently screaming profanities and assaulting people on stage now.”

Given the tumult that has followed Will Smith slapping Chris Rock onstage that night, the meaning behind Kravitz’ posts is not hard to divine.

Smith has, of course, since apologized, but he has also been roundly criticized by the likes of Jim Carrey, Howard Stern, Judd Apatow and Whoopi Goldberg. The Academy is, apparently, still exploring “further action and consequences.”