Oswestry: Latest dinosaur film ready to take a bite out of town 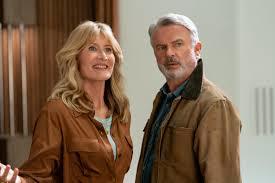 A ROARING good time will be had by anyone going to Kinokulture this weekend to see ‘Jurassic World Dominion’, the latest in the Jurassic World reboots/sequels/threequels series.

The cast of the latest films join up with some older faces including Sam Neill (has any man ever aged better?), Laura Dern and Jeff Goldblum from the original outings, and together they experience more dinosaur related mayhem. If there’s a place in your heart for ‘Man vs Dinosaur’ films, and there is in mine, you’ll love it.

Jurassic World Dominion has matinees on Sunday and next Wednesday.

Next week also sees the start of Kinokulture’s Summer of Queer Cinema, a selection of films from around the world highlighting LGBT filmmaking. There are some fantastic films showing throughout July and August including the acclaimed ‘Swan Song’. Visit Kinokulture’s website for more info.

Netflix is currently streaming a couple of films that may have passed you by. First up it’s ‘Love Sarah’ starring Celia Imrie as the bereaved grandmother who sets up a cake making business alongside her granddaughter. Rather like the cakes involved this is light as a souffle, very sweet, yet ultimately insubstantial, but is easily digested and may leave you on a sugar high. Without wishing to damn it with faint praise, which I shall now do, it means well but feels underdeveloped. If you enjoyed ‘Finding Your Feet’ or ‘Off the Rails’ you’ll love it.

Lastly, the best film I’ve seen this year, ‘Ali and Ava’, has just arrived on Netflix. Adeel Akhtar and Clare Rushbrook excel as the unlikely star-crossed lovers in the unlikely location of Bradford, jewel of the north. Director Clio Barnard fashions a moving film that never wallows in deprivation but looks at the human connections that make life worthwhile.