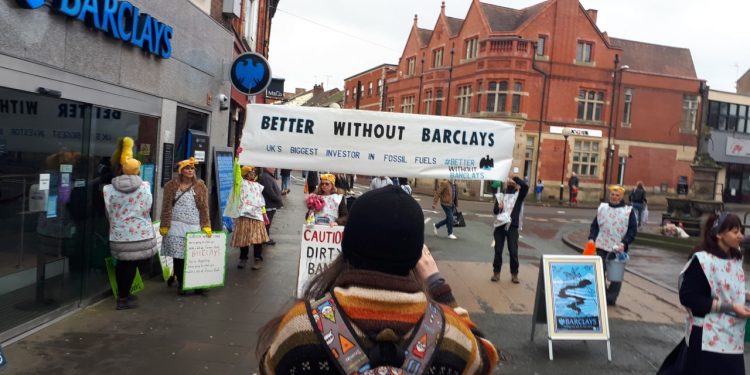 A BANK in Oswestry has been given an unscheduled ‘cleaning’ by demonstrators from the town’s Extinction Rebellion (XR)branch.

The protest at the Cross Street branch of Barclays Bank was staged to highlight its reported role in funding fossil fuels, with the group bringing sponges, mops and buckets in an attempt to clean up ‘Europe’s dirtiest bank’.

Scrubbing the bank’s windows and polishing the interior, the group called out Barclays for investing in fossil fuels and accusing it of ‘greenwash’.

Mike Bastow, a spokesperson for XR Oswestry and Borders, said they decided to clean Barclays because ‘they are the dirtiest bank in Europe, investing billions in oil, gas and fracking’.

He added: “Since the Paris Agreement 2015, Barclays has funnelled more money into fossil fuel projects than any other bank in Europe, including a whopping £20bn in 2020 alone.

“Instead of helping us solve the climate crisis, Barclays is actively making it worse, while laughing all the way to the bank as they make massive profits.”

A survey last year found that almost 80 per cent of Barclays customers were unaware of their bank’s fossil fuel investments and that almost three million customers would consider switching to more ethical banks.

Mike added that one customer, Dawn Meadows, cut up her Barclays debit card during the protest, says she decided to leave Barclays as a customer after hearing about the bank’s impact on the climate.

She said: “Switching banks was really easy and it means I now have a clear conscience.

“I don’t want my hard-earned money being used to fund the destruction of the planet.”

The Oswestry protest was part of a wider series of protests planned across Wales and the Midlands during February called ‘Better Without Barclays’.

Activists plan to call out the bank’s continued refusal to stop investing in fossil fuels across the month with a variety of different protests.

Mike added: ‘The climate emergency is the biggest threat we face.

“As individuals we’re all trying to cut our carbon footprints, but it’s pointless if our banks are actively funding the fossil fuel industry and making huge profits by killing the planet.

“That means our taxes are being used to fund new oil and gas expansion that will stop us from meeting the Paris Agreement targets.

“It is madness but it will only stop if people speak out.”