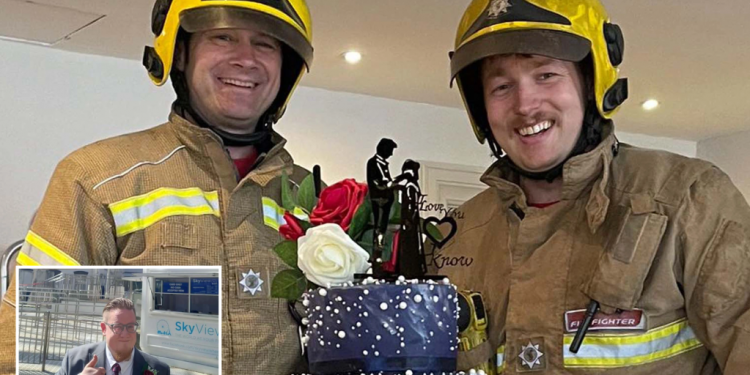 
A wedding was cancelled for the third time when the venue caught fire as the groom welcomed his guests.

James Leggett was inside with attendees and bride Amy Heath was two minutes from leaving her hotel room when the museum went up in smoke.

Police ran in to evacuate everyone after the roof caught fire at We The Curious in Bristol on Saturday.

The ceremony was cancelled but firefighters salvaged the untouched three-tiered wedding cake as well as old sentimental photos from the smoke and water-damaged building.

It is understood the wedding had already been delayed twice before due to Covid.

Royal Mail HGV driver James said he was absolutely gutted, adding: “We are both heartbroken but the love and support of our friends and family was unreal.

“It ended up being a lovely, if unconventional, day.”

And pictures showed two firemen carrying in the rescued cake, with the bride later cutting it.

James added: “The day was an absolute whirlwind of emotions.

“When we heard the pictures and the cake had been recovered, and then saw the firemen walk round the corner with it, was just indescribable.”

Bridesmaid Grace Williams said: “Thank you to the amazing firefighters who salvaged the untouched wedding cake from the reception room from what should have been James’ wedding had it not been for the fire.

“They also salvaged old photos with huge sentimental value too. Thank you!”

She added: “Her beautiful dream wedding was literally burning before her eyes. Truly unbelievable.

“I cannot express my sadness for Amy and James for not being able to say “I do”, but so proud of them both for making the best out of the sh**test situation.”

Solar panels on the roof of museum We The Curious caught fire but the cause is unknown.

A major emergency service response was scrambled when smoke billowed across the city and half a dozen firefighters were seen on the roof.

All staff and visitors were evacuated safely.

Russia’s Ukraine invasion has escalated a brewing battle over space

Malaysian woman, 63, develops a 5cm-long 'HORN' on her breast after rare case of itchy viral warts