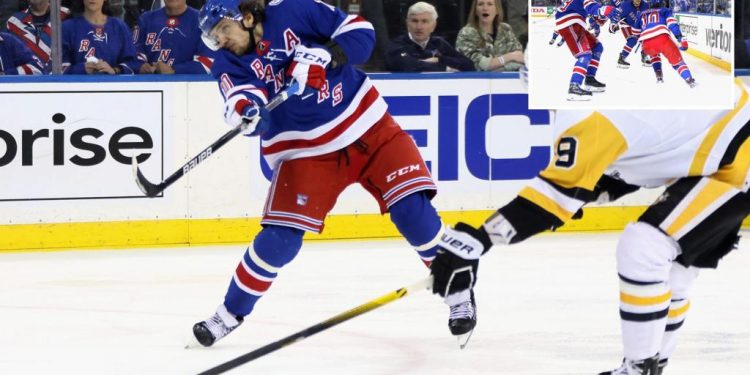 The resiliency, the no-quit fire and the insatiable desire to be a winning club has been at the heart of the Rangers all season long.

And that is why this Rangers team was able to rally from a 3-1 series deficit, stave off elimination twice and then force overtime in Game 7 Sunday night before Artemi Panarin punched their ticket to the second round of the Stanley Cup playoffs 4:46 into the extra period to secure a 4-3 win over the Penguins in front of a sold-out Madison Square Garden.

This Rangers team became just the third in franchise history to overcome a 3-1 series deficit.

This Rangers team is one step closer to the Stanley Cup.

Panarin joined the likes of Derek Stepan, who scored the overtime winner in Game 7 of the second round in 2015 against the Capitals, and Stephane Matteau, whose double-overtime score in 1994 defeated the Devils and sent the Rangers to the Cup Final, as the players who have been OT heroes for the Rangers at the Garden with his power-play goal.

“He’s the guy, when it was heading into overtime, I said to myself, ‘I know he’s going to score if we score,’ ” head coach Gerard Gallant said after the win, which sets up a second-round matchup with the Hurricanes. “If we get the winning goal, it’s going to be him.”

The Rangers won this game behind what makes them great: their star goalie Igor Shesterkin, who made 42 saves, their top six skaters, who combined for three goals and five assists, and their knack for finding ways to come from behind and win.

Mika Zibanejad, who scored his first goals of the series in Game 6, seized the moment when the Rangers were down one with 5:45 left in regulation. The top-line center wired the puck from the left faceoff circle past Jarry to knot the game 3-3 and spring every Blueshirts fan in attendance out of their seats.

“A little bit of desperation kind of kicks in when the clock starts winding down,” Zibanejad said. “It was a great job by [Andrew Copp] and [Alexis Lafreniere]. It was unreal.”

Jarry was eased into his first game action since April 14 to the sounds of his name echoing from the Garden crowd. Finishing with 26 saves, Jarry made his series debut after he fractured his foot at the tail end of the regular season, which sidelined him for the first six games of this series.

Post Sports+ members, sign up to have Mollie Walker text you the latest word on the Rangers and reply with your thoughts and questions. Not a Sports+ member yet? Try it now.

MSG made sure Crosby heard them, too. The crowd taunted No. 87 early and often to try and rattle the Penguins star center. Gallant’s assessment that home-ice advantage only matters in Game 7 proved to be correct.

But the Rangers won this series behind their No Quit in New York mantra. The rest of the NHL should know by now: Never count the Blueshirts out.

“We didn’t want this season to end,” Zibanejad said. “I think this has been our team all year. No matter how the game goes, whatever happens, we stick together, we work and we know what have in that locker room.”

The moon photobombs a sunset in this otherworldly solar eclipse image - Space.com