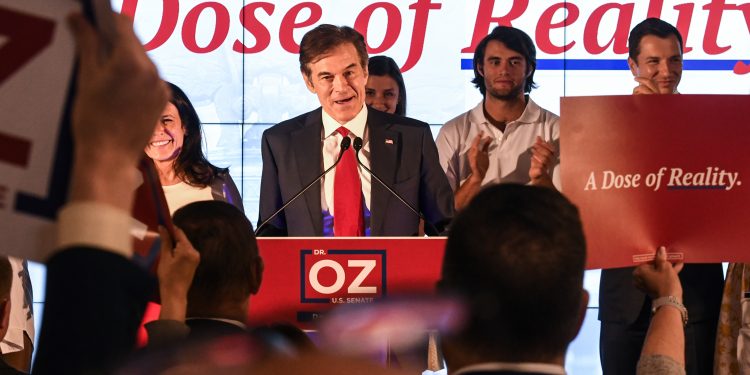 But at this juncture, neither camp is signaling that they’ll throw in the towel. Instead, Pennsylvania Republicans are predicting trench warfare that could drag out for weeks — and be fought in the media, as well as potentially in the courts — in the state’s closely watched primary.

“The chances of a recount are 100 percent and no less,” said Josh Novotney, a Pennsylvania-based GOP consultant. “There’s still votes coming in. It will probably get even tighter than it is now, which is almost humanly impossible. Each side will definitely be wanting any slight edge they can get going into a recount.”

On Thursday morning, Pennsylvania’s Department of State said there were about 51,000 mail-in and absentee ballots left to count. Of those, 17,000 were in the GOP primary.

A senior official in the McCormick campaign said Thursday afternoon that there were more than 15,000 uncounted GOP absentee ballots remaining in addition to some Election Day votes not yet tallied. The person also said that there were about 1,500 military and overseas ballots received so far from all political parties, which they believed would benefit McCormick because of his background as an Army combat veteran and outreach the campaign had made to those voters.

By Thursday evening, the Pennsylvania Department of State told POLITICO there were only an estimated 8,700 Republican mail-in and absentee ballots left to count. The figure was “based on a comparison of vote totals to Republican ballots returned and information we received from counties throughout the afternoon,” said Department of State spokeswoman Grace Griffaton.

Oz’s campaign confirmed this estimate Thursday afternoon, adding that “we believe it will be lower than that.”

The campaign also threw cold water on the weight of remaining votes in Allegheny County for McCormick, where the campaigns are waiting on final tallies from 31 of the county’s precincts.

“Relying on these votes, that math just isn’t there,” the Oz campaign said on a conference call, projecting there are just a little over 1,800 Republican votes remaining among the outstanding Election Day numbers. “They’re just heavily Democratic areas.”

On Wednesday evening, Jeff Roe, McCormick’s campaign general counsel, tweeted that he was behind by 2,700 votes on Tuesday night but had closed the gap by 1,500 votes. He predicted, “Dave is going to win.”

Casey Contres, Oz’s campaign manager, tweeted the same day, “While we look to get a better sense of the remaining votes today, we are optimistic Dr. Oz will win.”

Both Oz and McCormick have enlisted alumni from former President Donald Trump’s 2020 campaign to gird themselves for a potential recount. Mike Roman, the director of Trump’s Election Day operations, is helping the McCormick team, according to a source familiar with his efforts. The Oz campaign has brought onboard James Fitzpatrick, who led Pennsylvania’s Election Day operations for Trump.

Wally Zimolong, a Pennsylvania-based attorney, is also working for McCormick. He tweeted Wednesday that he was headed on behalf of the McCormick campaign to Lancaster County, where a number of ballots couldn’t be scanned because of a printing error, “to ensure the integrity of the counting of the mail-in ballots.”

James Schultz, a former Trump White House lawyer, and David Urban, former top Trump campaign adviser, have also been dispatched to McCormick’s headquarters in western Pennsylvania to help with the effort, according to a source close to the McCormick campaign.

In addition, the McCormick campaign has hired veteran Republican lawyer Chuck Cooper to be the lead of their legal efforts, according to a person familiar with the matter. Cooper won Sen. Rick Scott’s (R-Fla.) 2018 recount effort and also recently won the Supreme Court campaign finance case brought by Sen. Ted Cruz (R-Texas).

And lawyer Shohin Vance, who works with the firm Kleinbard LLC, is aiding Oz.

A source told POLITICO they received a call from the firm Vanguard Field Strategies, which said it was helping the McCormick campaign with a possible recount. The company said it is looking to bring in 300 people, and offered paid travel, a rental car and $125 a day to observe the potential recount, the person said.

Asked about the likelihood of a recount, Christopher Nicholas, a longtime Pennsylvania-based GOP consultant, said: “If you’re the showhorse, as they say, and it’s free, what do you have to lose?”

He said the campaigns “both have done it the right way, being almost virtually radio silent and allowing the process to get to completion,” but “once there is a final tally and it goes into the recount, then I expect it to get political again.”

On Wednesday, Trump, who endorsed Oz, said on the social media platform Truth Social that Oz should “declare victory” and baselessly suggested that there could be fraud in the primary: “It makes it much harder for them to cheat with the ballots that they ‘just happened to find.’”

A person close to the McCormick campaign said, “Trump is hedging his bet on Oz by throwing out false claims about the Republican primary election because he knows Dave is going to win.”

Fox News host Sean Hannity, a top ally to Oz, predicted Wednesday on his radio show that “under every scenario I have factored out, extrapolated out, Oz will be the winner in this race.”

But he also sought to raise doubts about the count, adding that “to be perfectly honest, I don’t trust people — and I’m not talking about Republican candidates — I’m talking about the people that have the ballots.”

Mike Pompeo, a McCormick supporter and Trump’s former secretary of state, tweeted Thursday, “Facts show that the counting of valid absentee ballots is very likely to put @DaveMcCormickPA on top in the PA Senate race. This is great news for Pennsylvania and for America.”

A recount must be held by June 1, and finished by June 7.