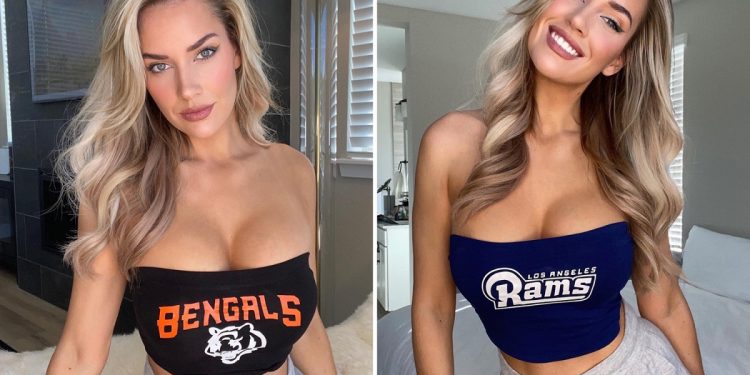 
PAIGE SPIRANAC is sticking more than her neck out with her Super Bowl prediction.

Golf’s social media sensation donned crop tops of both the Cincinatti Bengals and the Los Angeles Rams ahead of Sunday night’s showpiece.

And having tipped the Bengals to triumph, hopes her gridiron choice on paper is as good as her iron selection on the fairway.

That’s because if the Instagram celebrity gets it wrong, she says she is ‘picking one lucky winner to play with me’.

As the Rams are heavy favourites, Paige’s tip might be just what her 3.2million followers want to hear.

The American ex-pro player, 28, is a YouTube golf instructor.

So a round with her should be an educational tonic.

She posted twin close-up shots of her wearing the two tops and shorts in a bedroom, asking fans: “Bengals or Rams?”

And she was even more upfront in another post.

She wrote: “Do you want to play a round of golf with me?

“I picked the Bengals to win and if they lose I’m picking one lucky winner to play with me!”

Paige might be feeling sheepish after the match, though, because the Rams enter the 56th Super Bowl at the SoFi Stadium in California in hot form.