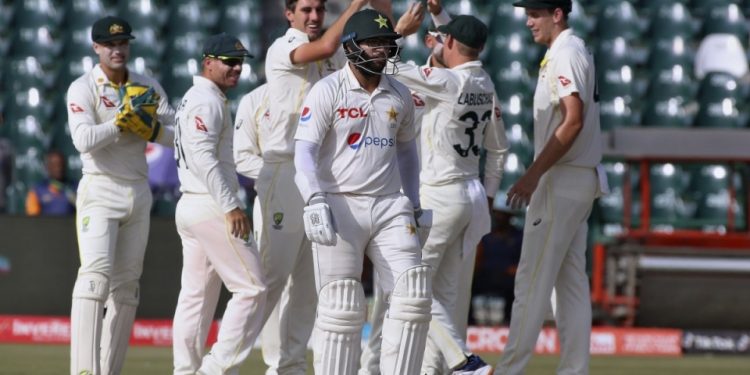 A reverse-swing masterclass from paceman Naseem Shah and a gritty top-order batting effort have catapulted Pakistan back into the victory mix in the third Test against Australia in Lahore.

Imam ul-Haq (11) was the only Pakistan batsman to fall after being trapped lbw by Pat Cummins.

Australia was cruising at 5-341 midway through day two before Shah helped spark a collapse of 5-50.

But when Carey was trapped plumb lbw by spinner Nauman Ali and Green was bowled by Shah, Pakistan roared back into the match.

The dismissal of Green was particularly impressive.

Shah made the most of the reverse swing to sneak one inside the bat and pad of Green and rattle the off stump.

Five overs earlier, Carey wasted a review on a ball that would have gone on to crash into middle stump.

Australia’s tail could only put up limited resistance as Shah and Afridi continued the onslaught, with Shah’s ability to extract reverse swing proving crucial.

Shah afterwards paid tribute to the help he had received from former Australian Test quick Shaun Tait, who was hired last month by Pakistan as bowling coach.

The visitors had started the day at 5-232 following strong knocks on day one from Usman Khawaja (91) and Steve Smith (59).

Green and Carey got through the morning session of day two unscathed, but it wasn’t without drama.

Carey was bizarrely given out on 27 by umpire Aleem Dar in a decision that confused everyone.

Hasan Ali’s yorker diverted off a footmark and brushed the off stump ever so slightly before bouncing short of the wicketkeeper.

Dar gave Carey out after a muted appeal from Pakistan and the Australian immediately reviewed the decision.

It wasn’t clear whether Carey had been given out caught behind – even though the ball fell short of the keeper – or lbw.

Either way, the replay clearly showed Carey’s bat and legs to be well clear of the ball with the decision promptly reversed.

That was as close as Pakistan got to snaring a wicket during the morning session, with Green and Carey both looking comfortable at the crease.

It was a far cry from the start of day one when Australia crashed to 2-8 following the early dismissals of David Warner and Marnus Labuschagne.

The series is level at 0-0 after the opening Tests ended in draws.