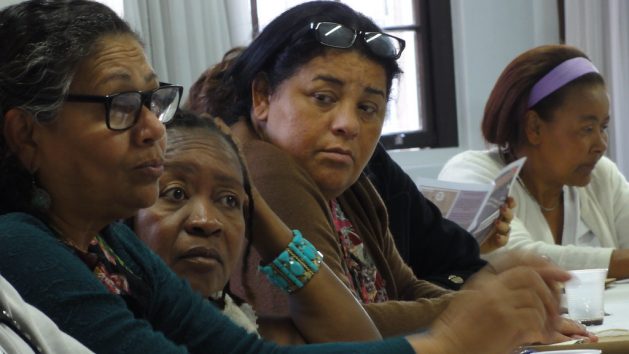 RIO DE JANEIRO, Feb 24 (IPS) – “Woman, poor, black and illiterate” – most domestic workers suffer quadruple discrimination in Brazil, which made them more vulnerable to the COVID-19 pandemic, says one of their leaders, Gloria Rejane Santos.

President of the Paraíba Domestic Workers’ Union for the past 12 years, she found herself out of work after coronavirus appeared on the scene.

Of the 6.2 million domestic service jobs in Brazil in 2019, 1.5 million were lost in 2020, estimated Hildete Pereira de Melo, an economics professor at the Federal Fluminense University who has been researching gender and economics for four decades.

Vaccination against COVID-19, which began in January 2021, made it possible to recover only part of the lost jobs.

Paraíba is one of the nine states of the Northeast, Brazil’s poorest region, which is home to 4.06 million of the country’s 214 million inhabitants.

In its largest inland city, Campina Grande, population 415,000, police and labor inspectors freed a woman on Feb. 2 who was working in a home under slavery-like conditions including overwork, unhealthy conditions, rarely being allowed to leave the workplace, and no labor rights.

“The pandemic aggravated the continuation of slavery,” Santos told IPS from João Pessoa, the capital of Paraíba, a city of 825,000 inhabitants, where two cases of slave labor were discovered and are still under investigation, she said.

Modern-day slavery in Brazil tends to be a more rural phenomenon. There were 1937 workers rescued from slavery conditions in 2021, almost all of them in the countryside of the Brazilian hinterland.

“Many employers demanded that their domestics stay at work all the time,” fearing that they would bring coronavirus back and forth to their homes. “The day laborers who could not accept it, we lost our jobs,” Santos said, referring to live-out domestic workers.

The pandemic thus created conditions for a return to work without time limits, without time off, and with a greater violation of labor rights, which have never been well-respected in domestic work.

The domestic labor market has changed since the 1980s. Live-in maids who worked an unlimited number of days have disappeared, as have domestics who work exclusively for one employer with a monthly salary.

There was an increase in the number of domestics who lived in their own homes and were hired for a limited number of days, who were more autonomous, in a process that accompanied advances in society, with new technologies and new habits, such as eating out more frequently, Melo noted. In addition, homes have become smaller and have lost the “maid’s room,” she said in an interview with IPS in Rio de Janeiro.

But informal employment is predominant. Nearly 70 percent of domestic workers do not have an employment contract. As a result, they do not have legal rights and are subject to the employer’s discretion, which has facilitated dismissals during the pandemic.

Their vulnerability is aggravated by the fact that 92 percent are women and 66 percent are black women, according to data from the Brazilian Institute of Geography and Statistics in 2019, the year before the outbreak of the COVID pandemic.

Domestic workers’ trade unions have included the feminine form of the word “workers” – trabalhadoras – in their names, recognizing the overwhelming majority of women in the sector.

Santos, despite presiding over the union, was left without regular work as a day laborer throughout the pandemic, as were “more than half of the domestic workers in Paraíba,” she estimated.

Work in the trade unions is voluntary. It only offers limited per diem income from a few sponsored projects, generally for the training of female workers, but “lately we don’t even get that,” lamented the 64-year-old trade unionist, who has six grandchildren and one great-grandchild.

In the last two years she has survived on food basket donations and the emergency aid that the government granted to the poorest of the poor, worth 600 reais (about 115 dollars) in 2020, reduced by half during 2021, when it was only made available for a few months.

“I managed to get it after much struggle, with the support of the Public Prosecutor’s Office, because I was registered as a town councilor, although I was an unelected candidate,” said Santos.

She attributes her decision to accept the presidency of the union to her “vocation”. “I am the daughter of a domestic worker, I suffered a lot watching my mother work hard for scraps of food, some clothes or shoes,” she said.

When she became a trade union leader at the age of 52, she decided to go back to school, and completed primary and middle school. Going to school with adolescents was very difficult, she said, as she was rejected as an “old woman”, especially when it came to group projects.

She then attended an adult education course for high school, where everything went well. But she did not make it into university, where she wanted to pursue a degree in social work. She has channeled that inclination at least partly into her union work.

During the pandemic, the union carried out a permanent campaign to collect food and aid for unemployed members. “We provided assistance to more than 400 families” at the João Pessoa headquarters and the subheadquarters in Campina Grande, she said.

But her main ambition is to “fight discrimination and make society recognize the value of domestic work.” She pointed out that she receives almost daily complaints of mistreatment and other conflicts from her colleagues. In these cases she receives help from a lawyer who has been working with the union on a pro bono basis since 2019.

To illustrate, she cited the case of “a maid who came to the union in tears” after she was accused of having stolen one hundred reais (19 dollars) from her employers. She was saved by a phone call from a son of the family, who confessed to taking the money without telling his parents.

The marginalization suffered by domestic workers in Paraíba is probably stronger than in other states because in that state “90 percent of them are black women,” said Santos.

“I am black, poor and the daughter of a domestic, but since I have an active voice, I decided to use it for the collective good,” she said.

Roseli Gomes do Nascimento, a 60-year-old resident of Rocinha, one of the large, famous favelas or shantytowns of Rio de Janeiro, had slightly better luck than Santos. Also a live-out domestic worker, of the five days she worked during the week, she lost four at the start of the pandemic.

It was not until the middle of the following year that she was able to return to work five days a week, when a good part of the Brazilian population was vaccinated against COVID. Only one supportive employer had kept her continuously employed and even paid her for her day of work during three months in which, for health safety reasons, she stayed away from her employer’s home.

That small income and 115 dollars a month in emergency government assistance for one quarter of 2020 and a fourth of that for nine months of the following year were barely enough to survive on. She lives alone, as her two daughters are now on their own, with her six cats. “I used to have nine, but I gave three away,” she told IPS.

A drastic reduction in beef consumption, sometimes replaced by less expensive chicken and eggs, and a diet with more fruits and vegetables, as well as fewer outings, helped her to live on a reduced budget, with the advantage of losing “about eight kilos, without even dieting.”

Domestic work employed 75.6 million workers, or 4.5 percent of all wage earners around the world, according to a 2021 report by the International Labor Organization (ILO).

In other words, the region has a higher proportion of paid domestic work, a product of its history and slavery, noted economist Melo. Only 20 percent of Brazil’s 60 million families hire domestic workers, a privilege of the upper-middle and upper classes.