Partygate: Blow to Boris Johnson as justice minister quits over his failure to resign after Covid fine 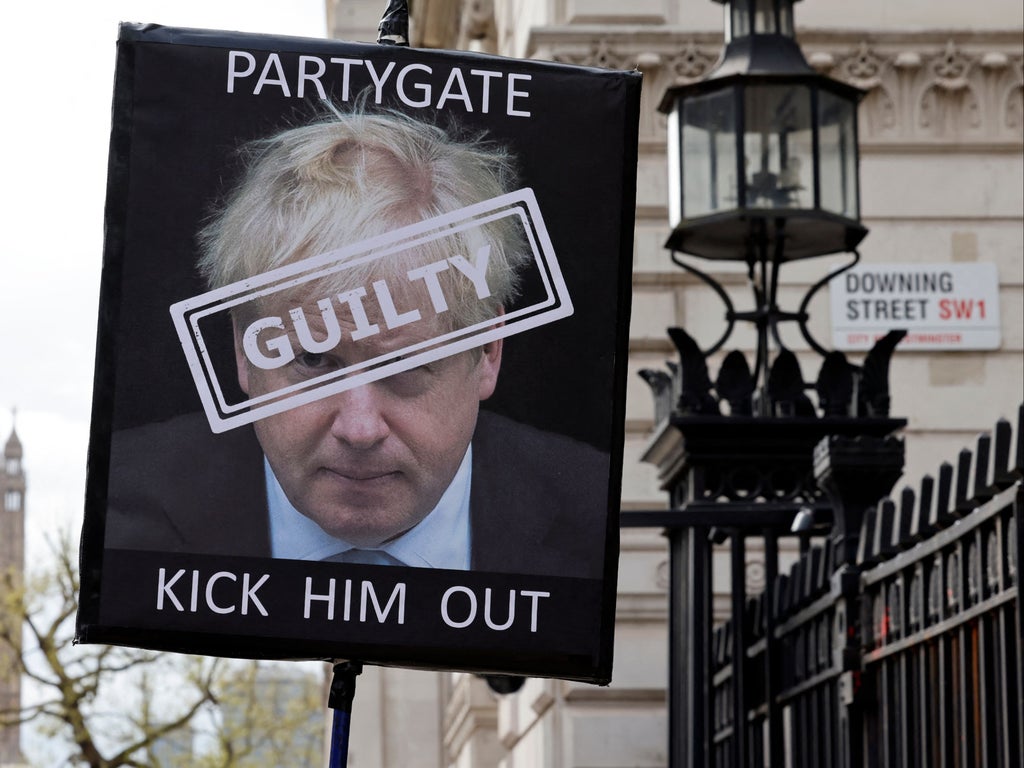 Boris Johnson’s hopes of drawing a line under the Partygate affair with a public apology were dealt a massive blow today as a justice minister quit the government in protest at the prime minister’s failure to resign after being fined for breaking Covid laws.

Lord Wolfson said that the “repeated rule-breaking and breaches of the criminal law” in Downing Street could not be allowed to be treated with “constitutional impunity”.

The eminent commercial barrister and QC – granted a peerage by Mr Johnson in 2020 when he was appointed to the government – was the first minister to quit over the Partygate scandal, saying that it would not be consistent with his duty towards the rule of law to remain in the prime minister’s administration.

Labour said his departure raised questions over the position of justice secretary Dominic Raab, whose position as lord chancellor gives him a special responsibility to uphold the law.

Meanwhile, discontent on Tory backbenches over the £50 fines imposed on Mr Johnson and chancellor Rishi Sunak for attending a lockdown-breaching birthday party in No 10 burst into the open, as two MPs called on the PM to resign.

Amber Valley MP Nigel Mills said Mr Johnson’s position was “untenable” after he became the first sitting UK prime minister to be found by police to have broken the law.

“I don’t think the PM can survive or should survive breaking the rules he put in place,” said Mr Mills. “He’s been fined, I don’t think his position is tenable.”

Voters were “rightly angry” over the 12 parties and gatherings in No 10 and Whitehall currently under investigation by police, he said. “When they were observing the very strictest of the rules, people who were making the rules didn’t have the decency to observe them.”

Mr Mills said he would “very shortly” be sending a letter of no confidence in Mr Johnson’s leadership to the chair of the Tory backbench 1922 Committee, Sir Graham Brady, who must call a vote if 54 MPs demand one.

Meanwhile, the Halifax Courier reported that Calder Valley MP Craig Whittaker had told constituents in a question session on Facebook that both Johnson and Sunak should go.

“Through this whole process it hasn’t been particularly clear that the prime minister broke any rules until of course he’s been issued with a fixed penalty notice this week,” said Mr Whittaker. “My expectation is that he and the chancellor should do the right thing and resign.”

Mr Whittaker said he would not be sending a letter to Sir Graham. But former minister Sir Gary Streeter, who has already demanded a confidence vote, told The Independent his position was “unchanged” following Mr Johnson’s apology.

And another ex-minister, Caroline Nokes, said in a letter to a constituent: “I have already been very clear that I believe the PM’s conduct fell far short of what my constituents have every right to expect. I do not need to write a letter of no confidence to the chair of the 1922 Committee, mine was in a very long time ago.”

In a letter to a constituent sent by North Wiltshire MP James Gray in January and seen by The Independentthe veteran backbencher said that if allegations against Mr Johnson and senior colleagues were proven “our support for them will, without doubt, disappear”.

He today declined to say whether he stood by the message, saying only that he had “no comment at all” to make.

Rumbles of discontent within Tory ranks were reflected in a deeply critical editorial in The Spectator magazine, often seen as a bible for the party faithful and formerly edited by the prime minister.

The article warned that Mr Johnson cannot survive as PM simply by appealing to his position as a “war leader” during the crisis in Ukraine, as several cabinet ministers suggested in messages of support on Tuesday. A resignation by Mr Sunak would be fatal to his position and he cannot simply “bat away” calls for him to quit over Partygate.

Instead, it said his future depends on his ability to address the cost of living crisis facing the country.

And in a scathing judgment, it said: “So far, he appears to have few ideas. This is the real threat to his position: that he has a massive majority but not much idea of what to do with it and that whatever action he is taking pushes Britain to a high-tax, high-debt, high-spending future that many people voted Tory to avoid.

“If he is forced out, it will be for this reason. “

In a letter announcing his resignation, Lord Wolfson said he had come to the conclusion that the “scale, context and nature” of lockdown breaches at No 10 meant that it would be “inconsistent with the rule of law for that conduct to pass with constitutional impunity, especially when many in society complied with the rules at great personal cost, and others were fined or prosecuted for similar, and sometimes apparently more trivial, offences”.

But he added that it was the official response to the police findings – which yesterday saw both Mr Johnson and chancellor Rishi Sunak apologise but resist calls for their resignation – that forced him to leave the government.

“It is not just a question of what happened in Downing Street, or your own conduct,” said the Tory peer. “It is also, and perhaps more so, the official response to what took place.”

He added: “I have concluded that, consistently with both my ministerial and professional obligations to support and uphold the rule of law, I have no option other than to tender my resignation”.

Although his ministerial rank is junior, the resignation of such a high-flying commercial silk has added significance because of the suggestion that the prime minister’s determination to cling onto power is regarded as constitutionally improper amid the senior echelons of the legal system.

He told Johnson: “Justice may often be a matter of courts and procedure, but the rule of law is something else – a constitutional principle which at its root means that everyone in a state, and indeed the state itself, is subject to the law,”

“Congratulations to justice minister Lord Wolfson for taking a principled stand,” said Mr Reed. “But what does this mean for lord chancellor Dominic Raab, who’s constitutionally charged with upholding the law but is instead condoning law-breaking?”