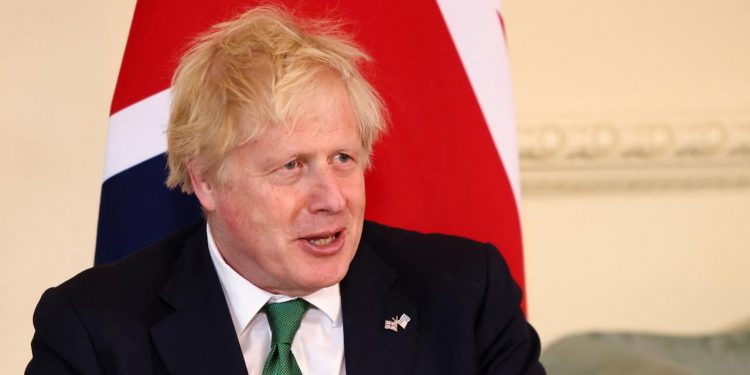 The UK prime minister has repeatedly said that he was unaware of any lockdown-breaking parties, but the new images appear to contradict his claims.

Boris Johnson is facing more pressure to resign as the UK’s prime minister this morning after leaked photos showed him raising a glass of bubbly at a gathering during lockdown.

The UK prime minister has repeatedly said that he was unaware of any lockdown-breaking parties, but the new images appear to contradict his claims.

The pictures, obtained by ITV News, show him holding a glass of fizz aloft at a leaving party for Downing Street’s then communications director Lee Cain on November 13, 2020.

Eight people are seen in the photos, as well as the photographer, and two bottles of champagne, four bottles of wine and half a bottle of gin can be seen. Biscuits, crisps and other food can also be seen in shot.

At the time, the rules – set by Mr Johnson himself – only allowed two people from different households to gather inside.

Mr Johnson has already been fined by the Metropolitan Police for attending his surprise birthday party – organised by his wife Carrie – at Number 10.

However, the force says it has concluded its investigation and will be handing out no further fines. A total of 126 fines were handed out over the scandal, dubbed ‘Partygate’ in the UK.

An investigation by a senior civil servant Sue Gray is over and a report that could decide the fate of Mr Johnson’s career is expected to be published in the coming days.

The photos, which are likely to form part of her report, raise major questions about whether the Prime Minister misled Parliament when he denied any knowledge of any such parties.

Doing so would breach the ministerial code, which would normally be a resigning matter.

When asked in Parliament last December whether a party took place on November 13, he said: “No, but I’m sure whatever happened the guidance… and the rules were followed at all times.”

“While the British public were making huge sacrifices, Boris Johnson was breaking the law.

“He said repeatedly that he knew nothing about law-breaking. There’s no doubt now, he lied. Boris Johnson made the rules, and then broke them.”

Ms Rayner’s boss, Sir Keir Starmer, is currently under investigation by Durham Police after a photo emerged of him drinking a beer and eating curry at what he claims was a work event while lockdown restrictions were in place.