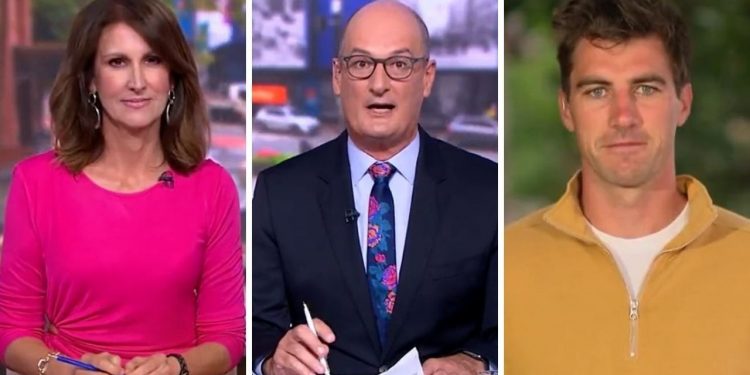 Pat Cummins refused to be drawn into David Koch’s trap as the Aussie cricket captain was grilled about a controversial topic on live TV.

Australian cricket captain Pat Cummins remained noncommittal on Justin Langer’s future in the face of a grilling on live TV.

Channel 7 hosts Nat Barr and David Koch tried to get an answer out of Cummins about whether he wants Langer to continue as coach of the national team but the fast bowler once again played a straight bat.

Cummins has refused to publicly endorse Langer as the Aussie legend waits to see whether Cricket Australia will extend his contract, which expires in the middle of the year. The 51-year-old faced a player mutiny in mid-2021 as dressing room leaks revealed unhappiness over his mood swings and intense management style.

Despite leading Australia to a recent T20 World Cup win and 4-0 Ashes sweep during Cummins’ first Test series as captain, there is speculation Langer will be ousted.

Barr broached the topic with Cummins in a Sunrise interview on Friday morning, asking: “Now Pat, if it was your call, would you sign Justin Langer as coach again?”

He replied: “In this case, it isn’t my call, so I’m going to leave the speculation to one side. He has done fantastic.”

But Koch wasn’t going to let Cummins off the hook that easily.

Koch: Pat, Pat, Pat. We know in cricket, more than any other sport, the captain has an enormous say. Are you happy to have Justin re-sign?

Cummins: Absolutely, I’ve been a part of the evaluation process, but I know my place. My place isn’t to make the end call. He’s been fantastic. I really do love JL, he’s been great for our team.

Koch: So you want him to re-sign?

Cummins: I’m not adding to any speculation.

Koch: Come on, Pat! Cricket was in tatters three years ago, he took the reins, yes he’s a fairly intense guy, everyone in sport knows that and sometimes the intensity can be a bit wearing, but you’ve all got the success, why break up the team?

Cummins: That’s 100 per cent fact, he’s been great, the results have been excellent especially the last six months. But it’s also fact we’re in a high-performance scenario where everyone gets evaluated all the time. His contract is up so they’re just running the process at the moment which I think is incredibly healthy and fair. I know everyone is wanting an urgent decision but I’m sure Cricket Australia will make that soon.”

Barr joked Cummins was “pretty good at being diplomatic” while Koch said the paceman “is going into politics after cricket”.

Cummins’ comments come after he tried to duck and weave questions about Langer at a press conference on Thursday.

“It’s in Cricket Australia’s hands,” the skipper said. “JL’s been doing a fantastic job, he’s been there for four years, his contract is obviously up soon, they’re just going through an evaluation process at the moment, which I think is fair, the right thing to do. We all get evaluated all the time as cricketers. It’s part of a high-performance environment.

“That process is happening, it’s a decision for Cricket Australia and we just have to wait.”

Cummins said the speculation was “not healthy” and he didn’t want to add to it by giving a public opinion that could hold little weight.

“I’ve got huge respect for JL, I’ve really liked working with him, but it’s not my call.”

On Monday, foxsports.com.au reported Langer reacted angrily when the possibility of him reapplying for the coaching role was raised by CA chief executive Nick Hockley and high performance manager Ben Oliver during a “heated” meeting last Friday morning.

According to the report, Langer is refusing to accept anything less than a full contract renewal, arguing his record warrants another multi-year deal.

A Cricket Australia board meeting is scheduled to take place on Friday, where Langer’s future will be a hot topic.

A crisis meeting between CA chiefs and senior players last year was needed to address the issues between team and coach, sparking suggestions Langer was in danger of not having his contract renewed.

The former Australian Test opener has since taken a step back and delegated more responsibility to his support staff, which has seemingly helped improve the team’s performance.

So why did the British media largely fail to cover a study that found lockdowns didn’t work?

So why did the British media largely fail to cover a study that found lockdowns didn't work?