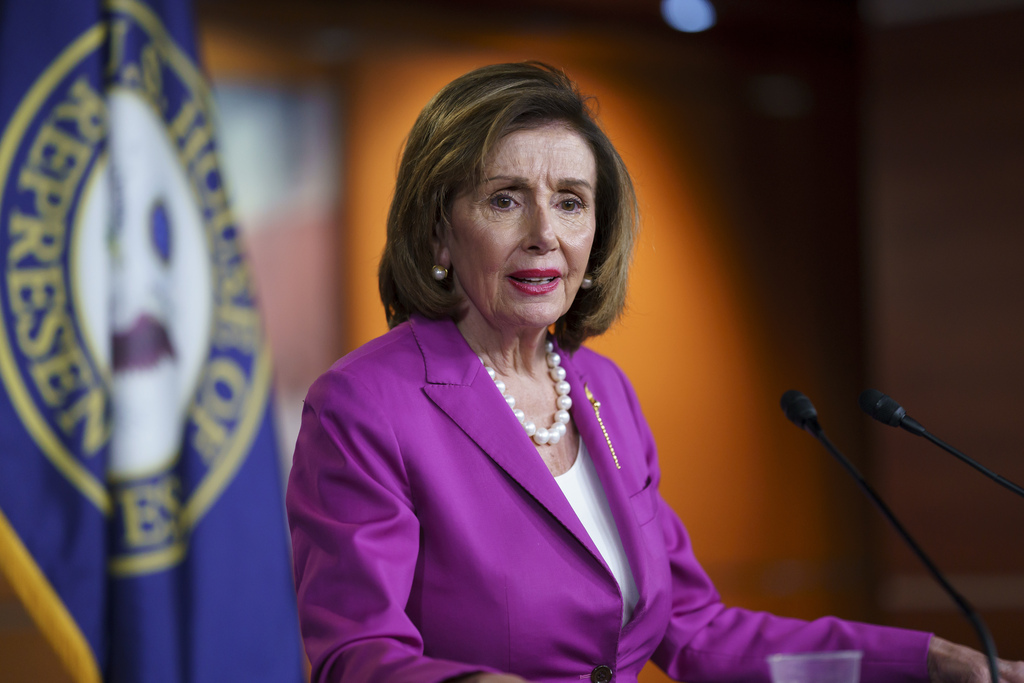 House Speaker Nancy Pelosi called House Minority Leader Kevin McCarthy a “moron” after being asked by a reporter about his criticism of the Capitol physician’s mask mandate in the House, another sign of the souring relationship between the two House party leaders.

“He’s such a moron,” Pelosi said while getting into her SUV outside the Capitol, when asked about the House minority leader.

Her insult came in response to McCarthy’s criticism in a tweet of new mask mandates in which he said, “Make no mistake — The threat of bringing masks back is not a decision based on science, but a decision conjured up by liberal government officials who want to continue to live in a perpetual pandemic state.”

When asked to respond to Pelosi’s comments, McCarthy questioned the science behind the speaker’s decision.

“Well if she’s so bright, I’d like to know where the science changes in the Capitol, between the House and the Senate,” he said, referring to different rules regarding masks between the two chambers.

“I never think it’s productive when I talk to her,” McCarthy said when CNN asked if he planned to speak to her.

Nearly half of House Republicans won’t say publicly​ whether they are vaccinated against Covid-19, according a CNN survey published last week.

Pelosi’s deputy chief of staff Drew Hammill quickly followed up Pelosi’s initial comments in a tweet, “Unfortunately, we can’t verify this audio because of poor quality, but I can confirm that the Speaker believes that saying a mask requirement is ‘not a decision based on science’ is moronic.”

The Capitol attending physician sent a memo Tuesday with guidance that both vaccinated and unvaccinated lawmakers, staff and other visitors to the Capitol wear masks indoors. The memo also specified the guidance is mandatory in the House side of the Capitol.

“For all House Office Buildings, the Hall of the House, and House Committee Meetings, wearing of a well-fitted, medical grade, filtration face mask is required when an individual is in an interior space and other individuals are present,” the memo said. “To be clear, for meetings in an enclosed US House of Representatives controlled space, masks are REQUIRED.”

Video: Pelosi: To say not wearing a mask is based on science is not wise

Some Republicans — particularly those of the far right and those aligned with former President Donald Trump — have begun to criticize Pelosi, blaming her for the mandate, and are refusing to wear masks on the floor. Their revolt against House rules is the latest example of politicization of health officials’ recommendations related to the coronavirus.

Members found not wearing a mask are subject to a $500 fine, per House rules. The House’s mandate follows the US Centers for Disease Control and Prevention’s new recommendation Tuesday that all Americans should mask up indoors, regardless of vaccination status, in areas with “high” or “substantial” Covid-19 transmission.

On Wednesday, GOP Rep. Lauren Boebert of Colorado threw a mask back at a floor staffer when she was offered one while trying to walk onto the floor maskless, according to a witness account relayed to CNN.

Rep. Chip Roy of Texas, a Republican who has refused to disclose whether he’s been vaccinated against Covid-19 for a CNN survey published last week, called the House mask rules “patently absurd.”

GOP Reps. Marjorie Taylor Greene of Georgia and Andy Biggs of Arizona were also spotted on the House floor without a mask on Wednesday morning.

Trump consistently undermined masking guidelines through out his presidency, and on Tuesday continued to inflame outrage over mask usage in a statement that said “We won’t mask our children” and “Don’t surrender to COVID. Don’t go back!”

Relationship on the rocks

While Pelosi and McCarthy have never been close, their relationship recently has completely deteriorated amid the fallout from the House select committee to investigate the January 6 Capitol attack.

When CNN asked Pelosi on Tuesday to weigh in on McCarthy saying he didn’t watch the first hearing for the select committee on Tuesday, Pelosi responded: “Anytime you mention his name, you’re not getting an answer from me. Don’t waste my time.”

This comes a week after a phone call between Pelosi and McCarthy where the speaker informed him she would reject two of his selections to the special House committee. Voices were raised, a source with knowledge of the matter said, and McCarthy protested, hinting the decision could come back to haunt her.

“What you’re doing is unprecedented,” McCarthy told Pelosi, according to a second source familiar with the call.

“The unprecedented nature of January 6th demands this unprecedented decision,” Pelosi said, suggesting that the adding GOP Reps. Jim Banks of Indiana and Jim Jordan of Ohio to the committee would undercut the integrity of the probe.