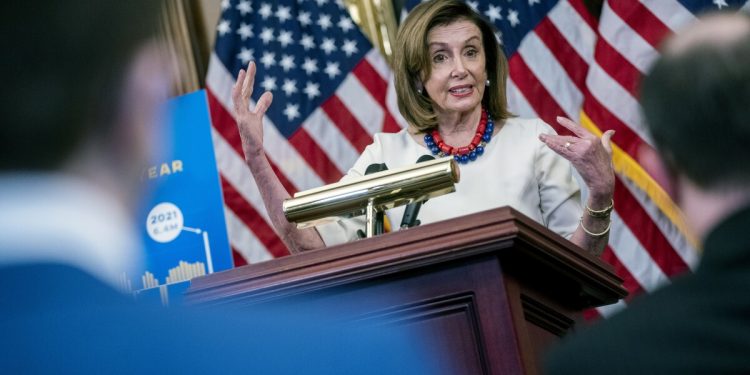 House Speaker Nancy Pelosi is seeking reelection to her San Francisco-area congressional seat, she said Tuesday, though she remained silent on whether she would seek to retain her position leading House Democrats.

Pelosi’s announcement comes amid speculation on her political future as she reaches her self-imposed last year in the speakership. For now, the announcement will stave off a leadership battle among restive House Democrats already struggling to enact President Biden’s agenda and ensures her leading role in what is likely to be a difficult midterm election.

Pelosi, 81, dropped the news in a three-minute video to supporters in which she introduces herself and thanks constituents for allowing her to represent them “and our San Francisco values” in Congress. The 18-term Democratic leader highlights passage of the Affordable Care Act, a strengthening of Social Security, Medicare and Medicaid, and lower prescription drug prices as examples of what she says Democrats have accomplished by working together.

“While we’ve made progress, much more needs to be done to improve people’s lives,” Pelosi says in the video.

“This election is crucial. Nothing less is at stake than our democracy,” she said. “But as we say, we don’t agonize, we organize. And that is why I am running for reelection to Congress and respectfully seek your support.”

In a note to colleagues last week, Pelosi laid out a government funding package, a competitiveness bill, sanctions on Russian government officials for Moscow’s actions in Ukraine and legislation to ensure veterans exposed to toxic substances in burn pits get adequate care and benefits as bipartisan priorities this year.

Democrats are also hoping to salvage some provisions in Biden’s “Build Back Better” plan after Sen. Joe Manchin III (D-W.Va.) announced in December that he couldn’t support the president’s climate change and social spending bill.

Left unsaid was Pelosi’s role in the House Democratic Caucus after the midterms. Pelosi, who was speaker from 2007 to 2011, began her second stint in the speakership in 2019. When Democrats regained the majority in the 2018 election, Pelosi agreed to limit her speakership to four years in exchange for support from moderate Democrats who were antsy for new leadership.

The caucus never followed through with enacting the formal rule, which limited members to three terms in leadership with a potential fourth. Pelosi said at the time she would abide by the limit regardless of whether it was enacted.

“I am comfortable with the proposal, and it is my intention to abide by it whether it passes or not,” she said at the time.

Given historical trends and Biden’s sagging approval rating, Republicans are favored this year to win back control of the House, where 29 Democrats have announced they won’t seek reelection, including five members of the California delegation.

The 2018 agreement didn’t seem to explicitly address a cap on serving as minority leader or the top Democrat in the House under Republican control.

Could you go a month without treats? It’s Dry January for your finances