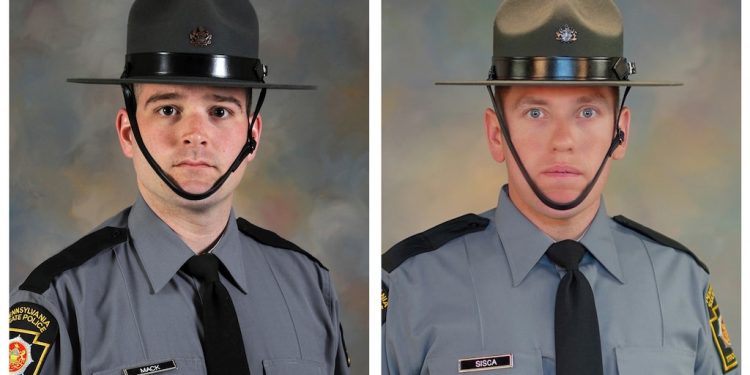 The troopers were escorting the man back to their patrol SUV when another car traveling at high speed fatally struck the trio.

The driver is suspected to have been intoxicated at the time of the crash, which remains under investigation, officials said at the news conference Monday. They did not identify the woman or say whether she had been arrested.

“We’re here today to mourn the loss of two of Pennsylvania’s finest,” Pennsylvania’s state police commissioner, Col. Robert Evanchick, said at the news conference. “Troopers Mack and Sisca made the ultimate sacrifice this morning while assisting a citizen in need. These troopers personified our department’s core values.”

Police have since identified the pedestrian but told reporters they would not be releasing his name until they could contact his family. It is unclear why the man was trying to cross the highway.

“They both had bright careers ahead of them, and it saddens me to know how their lives were senselessly cut short,” Evanchick said.

Both troopers arrived at the scene around 12:45 a.m. Monday, authorities said. After finding the man, who was in the left-hand lane on the southbound side of I-95, Mack and Sisca tried to walk him back to their patrol car.

That’s when a woman driving at high speed struck the trio just before 1 a.m. The impact was such that both troopers were thrown into the highway’s northbound lanes, authorities said at the news conference.

After hitting the three men, the driver struck a barrier separating lanes, continued a short distance and ended up on the right shoulder. She was still at the scene when police arrived.

When dispatchers could not communicate with Mack and Sisca, they sent backup, authorities said. Police said that by the time the other troopers arrived, some witnesses were attempting lifesaving aid on Mack, Sisca and the other man. All three were pronounced dead at the scene.

Authorities did not take questions from reporters at the news conference, citing the ongoing investigation. A spokesman with the Pennsylvania State Police did not immediately respond to a message from The Washington Post early Tuesday requesting additional details on the investigation.

Gov. Tom Wolf (D), who was at the news conference, ordered that the state’s flags be flown at half-staff to honor Mack and Sisca.

“This is a very sad day for Pennsylvania,” Wolf told reporters. “There are three families mourning the loss of loved ones. … On behalf of all Pennsylvanians, I want to extend my deepest sympathies and condolences. We are so, so sorry for the loss we have all experienced today.”