Pension schemes ‘still have much work to do’ in adapting to the risks and investment opportunities of climate change, warns an industry watchdog as the COP26 UN summit kicks off in Glasgow.

The Pensions Regulator believes too few schemes give enough consideration to the issue, meaning investment performance – and ultimately the financial results for retirement savers – could suffer.

Its progress report comes as an influential campaign group claims the investments of UK pension schemes enable the release of 330million tonnes of carbon every year – more than the country’s entire carbon footprint. 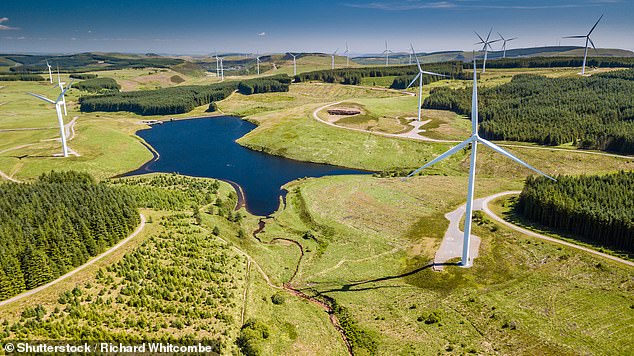 Going green: There may be opportunities to access new markets and technologies in the transition to a low-carbon economy, says the regulator

‘If the UK pensions industry was a country, it would find itself in the top 20 carbon emitters globally,’ according to Make My Money Matter, which was founded by celebrity film director Richard Curtis and ex-Bank of England governor Mark Carney.

The group recently called out 71 of the UK’s top 100 final salary pension schemes for failing to make ‘robust’ commitments to fight the climate emergency, in an attempt to ramp up pressure on them ahead of the COP26 UN summit which runs until 12 November 2021.

Pension industry bodies responded to the Pension Regulator and Make My Money Matter by explaining the progress schemes and providers are making in considering climate change in investment decisions – find out what they are doing below.

The regulator’s report says that pension schemes could see a positive impact from considering climate change, including on expected returns for savers and the capacity to reduce risk.

It adds that there may be opportunities to access new markets and technologies in the transition to a low-carbon economy.

What are defined contribution and final salary pensions?

Defined contribution pensions take contributions from both employer and employee and invest them to provide a pot of money at retirement.

Unless you work in the public sector, they have now mostly replaced more generous gold-plated defined benefit – or final salary – pensions, which provide a guaranteed income after retirement until you die.

Defined contribution pensions are stingier and savers bear the investment risk, rather than employers.

– Some 43 per cent of defined contribution pension schemes took account of climate change in their investment strategies when surveyed in 2020 – double the percentage the previous year.

And 95 per cent of all defined contribution savers were in a scheme that does consider the issue.

‘This is because the vast majority of members are in master trusts, and 94 per cent of master trusts took account of climate change, compared with 70 per cent per cent of large schemes, 49 per cent of medium schemes and 8 per cent of small and micro schemes used for automatic enrolment,’ says the report.

– Some 49 per cent of all defined benefit pension schemes have allocated time or resources to assessing financial risks and opportunities associated with climate change.

The Pensions Regulator admits that a current lack of relevant data could be a barrier to schemes adapting to climate change.

Chief executive Charles Counsell says: ‘The pension industry still has much work to do to build resilience and assess climate-related risks and opportunities.

He believes that unless the risks are managed properly they could affect scheme funding, and the employers who sponsor them, and leave some savers facing a poorer retirement.

The research used as its starting point an Office for National Statistics estimate of the UK pensions industry as worth £2.7trillion. 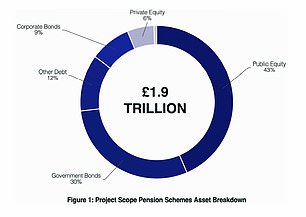 Route2 omitted derivatives, cash, cash equivalents and other unclassified assets from its calculations, but included public equity, private equity, government bonds, corporate bonds, and other debt, so it analysed assets under management of £1.9trillion.

To assess both emissions and fossil fuel investments, it used ‘bottom up’ data such as from default pension funds, and combined it with ‘top down’ data from sources like the ONS and MSCI ACWI index.

Full details of how it analysed pension industry investments are here.

What does the pension industry say?

‘It is positive that the Pensions Regulator recognises the rapid progress pension schemes have made in taking climate change into consideration in their investment decisions,’ says Nigel Peaple, director of policy and advocacy at the Pensions and Lifetime Savings Association.

‘Indeed, as many as 95 per cent of members belonged to schemes where this was the case when the survey was conducted in 2020.

‘Given the pace of progress, almost a year on from when TPR conducted its survey, we are confident that many more schemes now have embedded climate change considerations into their decision making.’

Peaple says the legal requirements in the UK are world-leading, and the Government was the first to apply the internationally mandated Task Force on Climate-Related Financial Disclosures requirements to pension schemes.

What does responsible investing jargon mean?

Two thirds of savers want to invest responsibly but are baffled by jargon: How to tell ESG from SRI and impact investing… and spot greenwashing here.

He went on: ‘The pensions sector is united in its desire to tackle climate change and wants the Government to accelerate its climate roadmap to ensure companies, asset managers and service providers catch-up with the expectations on pension schemes.

‘Doing so will ensure that schemes have more accurate and meaningful data on which to base their strategies and commitments.’

Peaple notes that the Pensions Regulator has acknowledged there are still barriers for pensions schemes – including a lack of quality data on which to base decisions – and says the PLSA has identified solutions to some of the issues.

Ben Wilson, Director of Corporate Affairs and Climate Change at the Association of British Insurers, says: ‘The power of the insurance and long-term savings sector to reduce emissions and help meet net zero by 2050 is huge.

‘While great progress has been made this year, which the Prudential Regulation Authority has described as a “step change”, our sector knows it must do more to reduce carbon emissions.

‘Our Climate Change Roadmap sets out new short and medium-term milestones ahead of fully decarbonizing activity by 2050.

‘The insurance and long-term savings sector has committed to supporting customers to make sustainable choices by making it easier for customers to make green decisions about their pension savings and to reach a 50 per cent reduction in greenhouse gas emissions by 2030.

‘For the insurance and long-term savings sector to make net zero commitments, it will be important to provide clarity over the UK economy’s pathway to net zero and reliable datasets to measure progress, so investment decisions can be made with confidence.’