The head of the Centers for Disease Control and Prevention (CDC) acknowledged the value of natural Covid immunity from infection on Tuesday, and even said it could temporarily replace the fourth dose of the vaccine, a stark change from previous guidance from the agency.

Dr Rochelle Walensky, director of the CDC, said during a White House COVID-19 briefing Tuesday that people who are already fully vaccinated and boosted, and have recently suffered an infection from the virus, are safe to put off receival of a second booster dose for two to four months.

While the CDC had previously acknowledged that there is some immunity provided from previous infection, notably allowing proof of it to serve in lieu of a negative test for some travel restrictions in the past, this is the first time the agency has said that natural immunity could replace vaccine-induce immunity – even if only temporarily.

‘If you’ve had omicron disease in the last two or three months, that really did boost your immune system quite well,’ Walensky said.

The comments from Walensky come as the CDC and Food and Drug Administration (FDA) face criticism for their handling of the roll out of fourth doses of the vaccine. 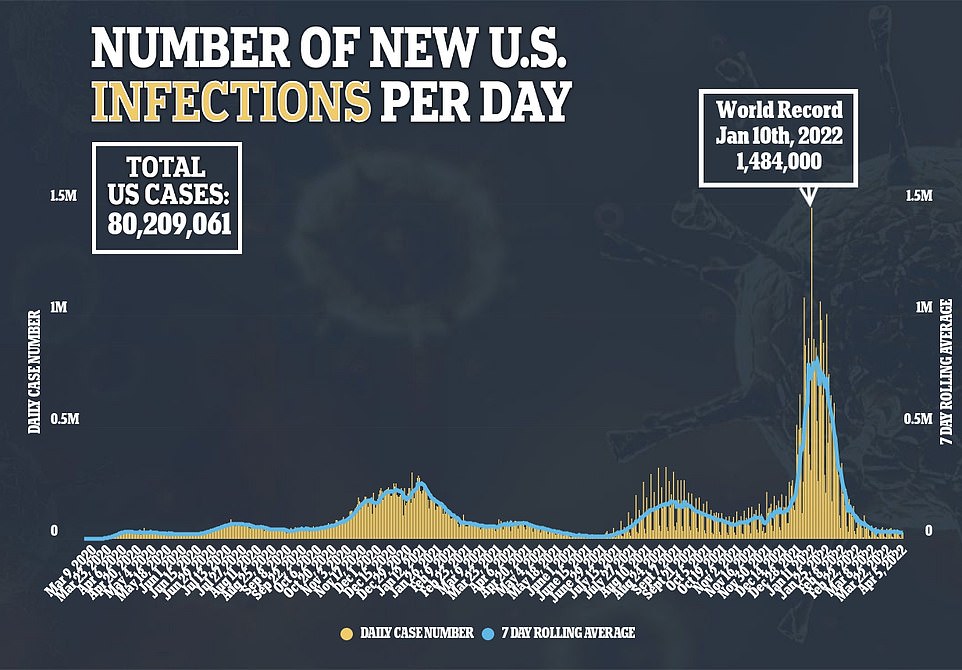 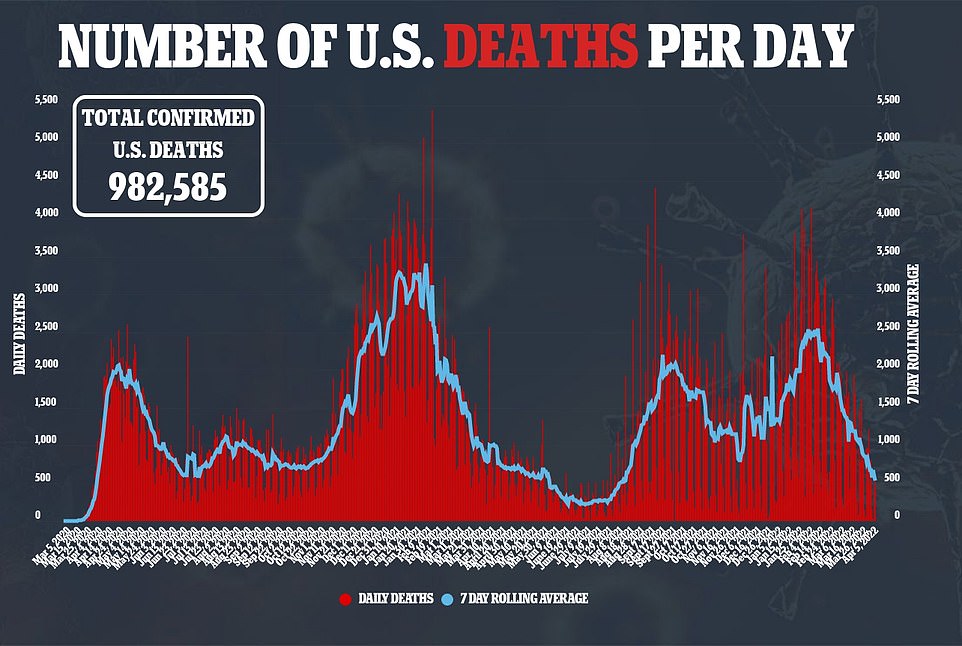 The FDA greenlighted second booster shots of the Pfizer-BioNTech and Moderna COVID-19 vaccines – and fourth doses overall – for Americans aged 50 and older at the end of March.

Unlike previous shots, the FDA chose not to hold and advisory panel meeting to receive opinion from outside experts before the approval of the jab. 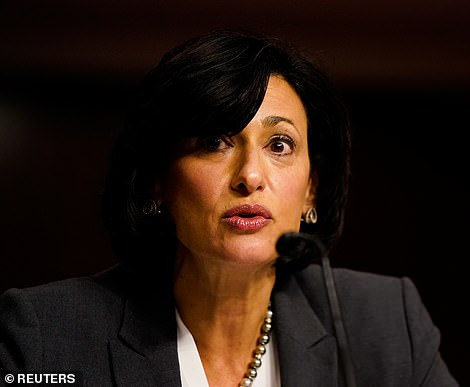 Dr Rochelle Walensky (pictured), director of the CDC, said that Americans that were recently infected with Covid can put off receiving the fourth vaccine dose until this fall

Many of the experts that would have been on that panel are now voicing their opinions, with some saying they would not have approved the shot had they been asked.

Dr Eric Rubin, editor in chief of the New England Journal of Medicine, and member of the FDA’s Vaccines and Related Biological Products Advisory Committee (VRBPAC) – which usually would advise on these decisions, said last month he did not see enough data to support the need for the shots.

‘The only data that I’ve seen has been for participants followed for just a few weeks,’ Rubin told CNN.

‘The most important information is going to be how well a fourth dose protects highly vulnerable people against serious disease and death, and I don’t know when that will be available.’

Dr Paul Offit, also a VRBPAC member and the director of the vaccine education center at the Children’s Hospital of Philadelphia, was a critic of the rollout of the first booster dose and takes issue with this approval as well. 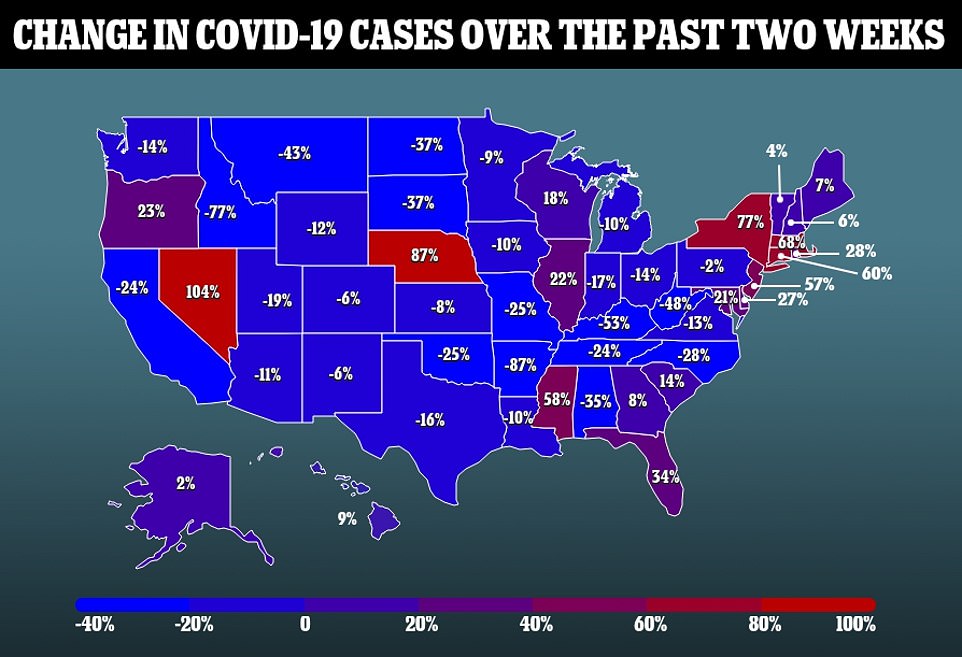 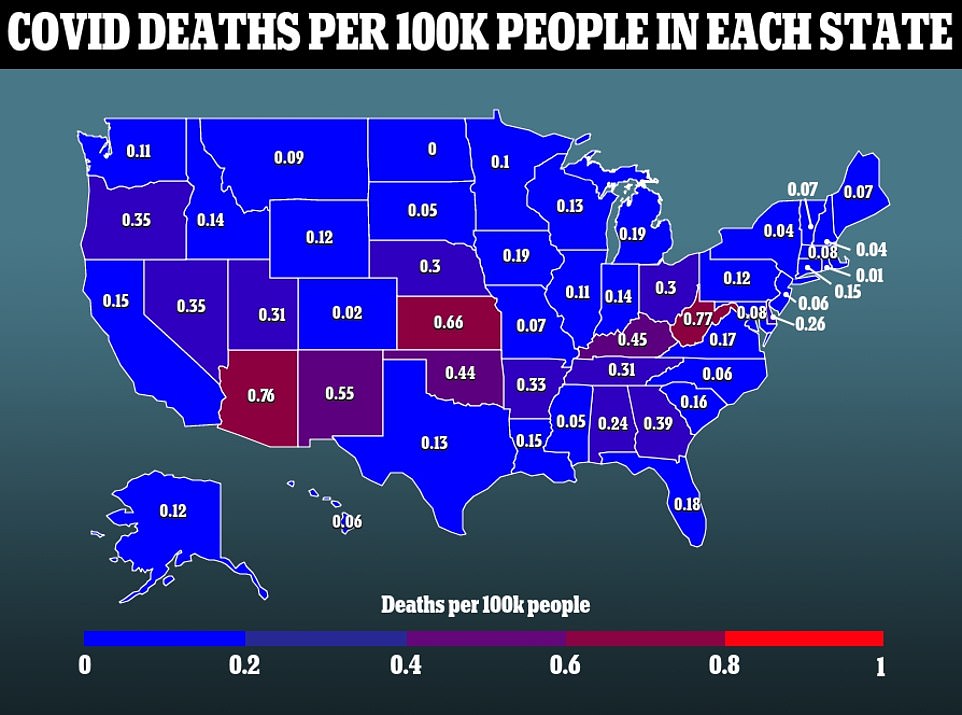 Dr Cody Meissner, the chief of pediatrics at Tufts Children’s Hospital and also a member of VRBPAC, is unsure whether the virus poses enough of a risk at the moment to make a fourth shot necessary, describing it as ‘an unanswered scientific question for people with a normal immune system’ to a Wall Street Journal op-ed.

Advisors were finally given an opportunity to convene on Wednesday, where they questioned the FDA on the decision to leave them out of the process for approving the fourth shots.

Dr Peter Marks, who leads the FDA’s Center for Biologics Evaluation and Research, making him the top vaccine regulator in the agency, replied by saying the authorization opened the door for vulnerable groups to receive an additional shot, but everyone can choose for themselves when they feel the shot is necessary.

Marks’ statements reiterate what Walensky had said during the briefing on Tuesday.

She said that while many people in the eligible group were going to receive the next shot, that it is ‘very reasonable’ if some people choose to wait.

Both Marks and Walensky, among other officials and experts, have predicted that another Covid jab will be needed for all Americans this fall. 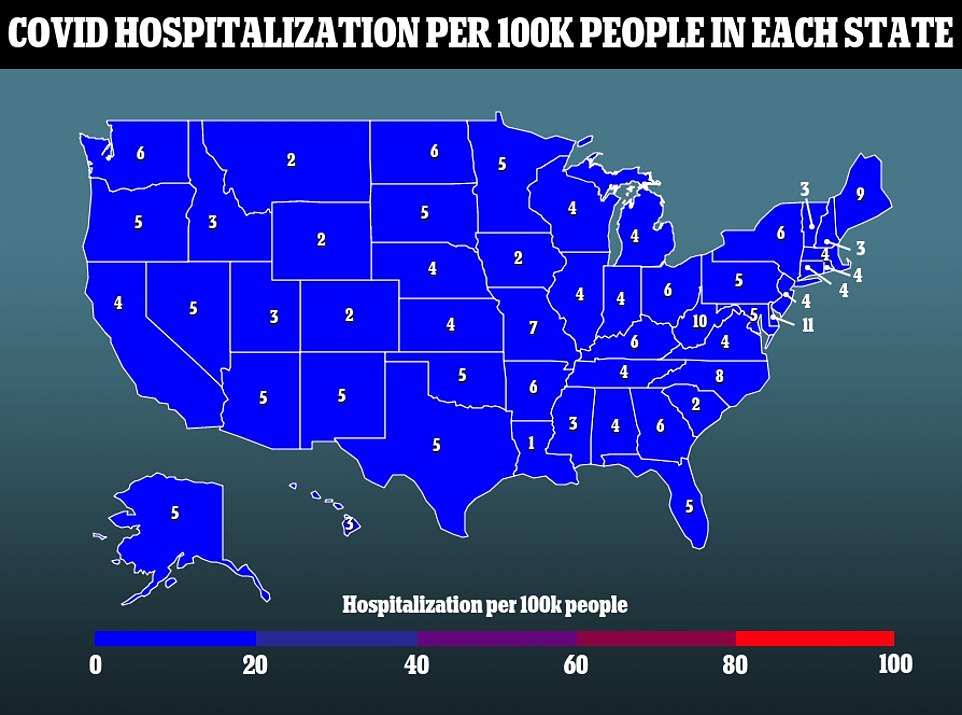 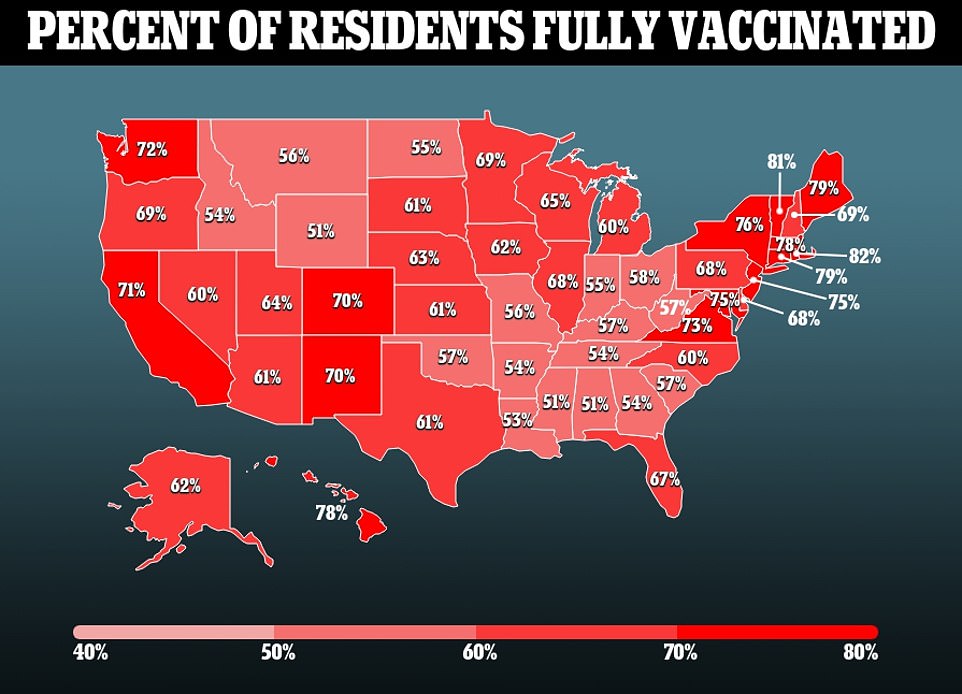 On Tuesday, the CDC chief that she does not believe middle-age to elderly Americans who get the shot now will need yet another jab later on.

‘If you’re prone to go ahead and get a vaccine, there’s very little downside to doing so right now — especially those at high risk of severe disease,’ she said.

‘If you get a shot now, that very well may mean you still need another shot in the fall.’

This comes as Covid continues to recede across America. Daily cases are down 15 percent over the past week, to 29,521 daily infections.

Deaths are continuing their rapid decline as well, falling 34 percent to 538 per day over the last seven days.

Cases are starting to rise once in again in 21 states, though, potentially an indicator of the BA.2 ‘stealth’ variant’s spread across the country.

The CDC revealed Tuesday that the BA.2 strain – which is 30 percent more infectious than BA.1 but just as mild – now makes up 72 percent of sequenced cases in the U.S.  Omicron as a whole, including BA.1, still makes up every single sequenced case in America. 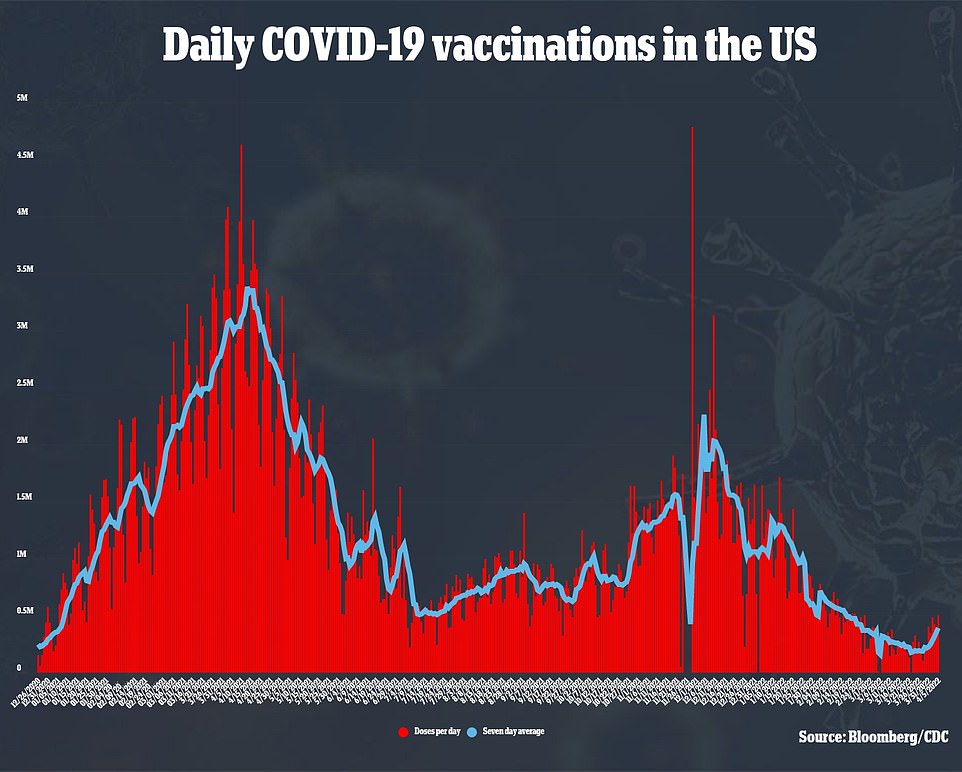 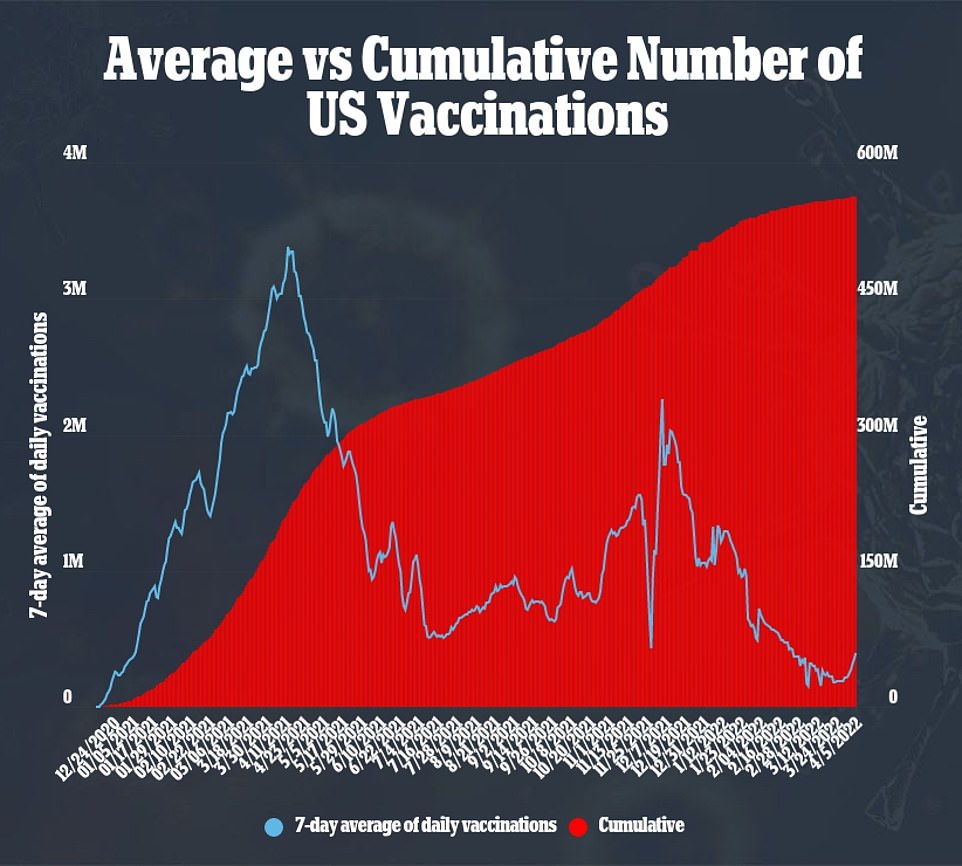