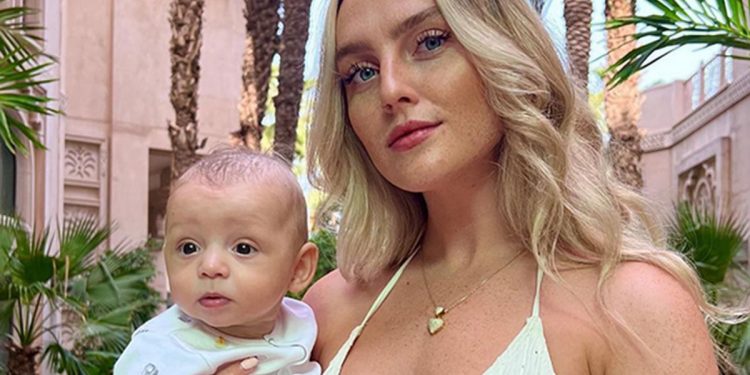 The Little Mix singer took to Instagram to proudly share the milestone moment with her 14.3 million followers.

In one cute snap Axel is dressed in a Mickey Mouse jumper as he gazes up at his mum.

A second sweet photo shows the tot in his moses basket ‘reading’ a card with stars and moons on, which says on the front: “Today I am six months old.”

Axel is the first child for Perrie and her footballer boyfriend Alex Oxlade-Chamberlain, both 28.

Unlike Perrie, Leigh-Anne has chosen to keep the names and gender of her twins private.

Although she has shared snaps of her babies with footballer fiancé Andre Gray on social media, their faces are always covered with emojis.

Despite keeping the tots out of the spotlight for now, Leigh-Anne also marked their six month birthday with some cute photos in her Instagram stories.

She shared a beachfront holiday shot of herself in a green dress pushing two prams which she captioned: “My miracles are six months. How did that happen?”

Fans could only see a glimpse of the twins’ feet as their faces were covered with baby emojis.

While the Little Mix babies are only six months old, they are already pretty well travelled.

In November Perrie took Axel on his first family holiday to Dubai and shared snaps of him in an adorable swimsuit beside the pool at the luxury resort.

Leigh-Anne’s twins have been on holiday to Jamaica, where some of her family are from.

In one gorgeous snap from their holiday, Leigh-Anne and Andre stood on the beach in their swimwear, each holding a baby in their arms.

Their little ones was dressed in mesh tops the colours of the Jamaican flag.

Leigh-Anne and Perrie have also snapped right back into shape only six months after giving birth.

Both have shared bikini snaps showing off their incredible bodies, which show no sign of having just had a baby.

The girls are currently on maternity leave from Little Mix but are set to embark on a final tour with the band later this year.

After that the group will disband temporarily to focus on solo projects, but they insist it isn’t a permanent break up.

Perrie has also been posing in a bikini looking amazing
(

She shared snaps from her holiday to Dubai
(

Announced the news in an Instagram post in December, Little Mix told fans: “We wanted to let you all know that after the Confetti tour in April/May next year we are going to be taking a break from Little Mix.

“It’s been 10 amazing years, a wonderful non-stop adventure, and we feel the time is right to take a break so we can recharge and work on some other projects.

“We can’t thank you enough for your love and never-ending support since the beginning. We love you all SO much.

“We are not splitting up – Little Mix are here to stay We have plans for more music, tours and performances in the future.