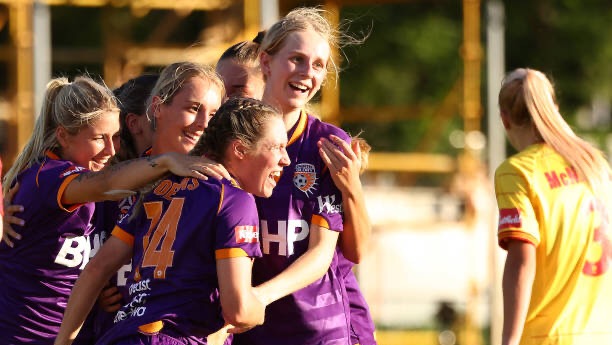 The 2020-21 season was arguably a disaster for the Perth Glory.  In its 9th place worst ever W League finish, they did not win aa single game all season and registered eleven defeats and only one draw to finish the season with a solitary point.

In order to ensure that this performance did not replicate itself again in the upcoming seasons, the Glory were very busy during the offseason.  Not only did they start signing players months before other W-League teams, but they ensured many of those players committed to long term contracts.

This new direction for the club should bring stability over the next few years and hopefully success.

Their offseason activities started on April 14, 2021, three days after the 2020-21 W-League Grand Final.  They confirmed their trust in head coach Alex Epakis, ensuring he would remain in Western Australia for following season.

They also ensured captain Natasha Rigby‘s commitment for this year.  Rigby has been with the club since her debut in 2016 and played in every game of every season with the exception of her rookie year.  She featured in every single minute of last year’s unsuccessful campaign.

After ensuring their coach and their captain on the first day of signing, they also got two Junior Matildas Hana Lowry and Tijan McKenna to commit to long-term contracts.

Hana Lowry made her W-League debut with Perth in the 2019-20 season.  She played in every game of this last season scoring two goals in the process from midfield.

Tijan McKenna had a breakthrough season with Perth, her first in the W-League.  While she was largely used as a substitute, the young attacker showed her versatility by starting and being substituted into multiple positions.

The Glory also re-acquired Junior and Young Matildas goalkeeper Morgan Aquino in May.  Aquino had previously played for Perth in the 2019-20 season before making a change last year for the Brisbane Roar.

Young Matildas Alana Jancevski was then signed to a long term deal.  The 18-year-old has yet to make her W-League debut, having previously been part of the Melbourne Victory set-up.  However the Glory expressed their enthusiasm at the attacking prowess that the youngster could display in the upcoming seasons.

Deborah-Anne of the Harp then committed to Perth for the 2021-22 campaign.  The 20-year-old had make her debut in the previous season, featuring in every single match largely as an outside back.  However, the youngster is capable of playing in attack as well.

Sarah Carroll was the first signing in June.  The 26-year-old veteran made her W-League debut in 2011-12 and has featured in every season since for the Glory.  Her continued commitment will bring stability to the the back line.

Perth were then able to lure attacker Demi Koulizakis from Canberra United.  The 23 year old, who had previously played at the collegiate level in America, will bring in both youth and experience to the team.

The club also re-signed Isabella Wallhead and Abbey Green to one year contracts.  Both have been with the Glory for several seasons, utilized as substitutes.  Head coach Epakis looks forward to both players continuing their development with Perth.

Fellow 18-year old Claudia Mihocic also signed, albeit to a long-term contract. While she has yet to make her W-League debut, the Junior and Young Matilda is considered one of the most promising prospects in Australia.

Her fellow Young Matilda Aideen Keane also signed with Perth to a one year deal.  She had made her debut with the Western Sydney Wanderers last year.  The club are excited about the attacking options that she brings to the side with her addition.

After the signing of this flurry of youth in June, the Glory brought back veteran W-League player Kim Carroll.  Carroll has ten years of experience in the league, five seasons with Perth and five with Brisbane Roar.  She played every single minute in defence for the Roar last year.

Young Matilda Susan Phonsongkham then signed in July.  The Glory were able to lure the 20-year-old from the Western Sydney Wanderers.  They hope to keep developing there attacking prowess, in order to capitalize on it and add much needed goals to the side.

Perth also lured her Wanderers teammate Courtney Newbon for the upcoming season.  She had been with the Sydney based clubs for two seasons making eight starts. The goalkeeper is one of the most promising young keepers in the country.

Gemma Craine then re-signed with Perth for one more season.  The 26-year-old had a good start to her maiden season last year but then got injured.  Now recovered, she will be available for the beginning of the upcoming campaign.

Midfielder Sarah Cain then signed for the club after having spent her debut season with Melbourne City making six appearances. Cain signed a one year contract with the Glory.

They also got the commitment of another midfielder, Junior and Young Matilda Sofia Sakalis.  Also a former Melbourne City player, the Glory’s long term contract show the confidence they have in what she can bring to the team in the upcoming years.

Liz Anton was the latest signing, having put pen to paper in early August for the upcoming year. Anton was integral to Perth last year, playing every single minute in defence.  The Kiwi was part of the Football Fern’s Tokyo 2020 campaign this last summer, albeit she remained on the bench for the campaign.

The Glory’s focus on young talent, much of it local, signed to long-term contracts including many players with immense potential not just at the domestic but also at the international level should bring much long-term stability to the team.

They signed most players to the team prior to when other W-League teams had even started to build their squads for the upcoming campaign.  Both show a well thought out plan, one done to ensure to get the talent that Perth desired to add this upcoming year.

With 18 players committed they may still have a few signings before the season starts in November.

While this is a team full of talent, the long term talent signed is mainly young showing that the Glory are in future proofing mode.  Their 2021-22 season could arguably not be worse than the last campaign, but with the players signed this offseason may take a few years to develop.

Spectators should take notice and be excited about this long term project.