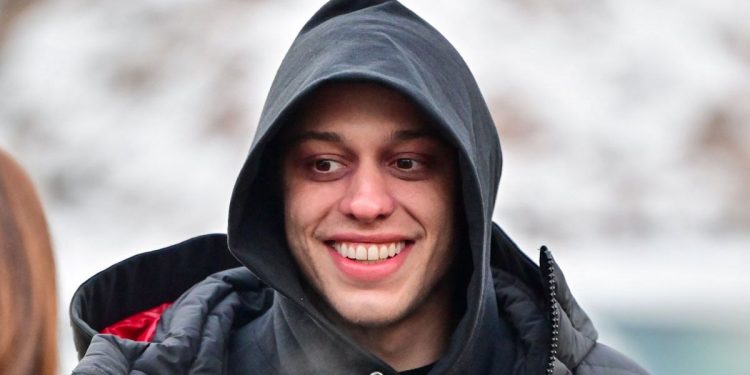 Kim Kardashian reveals Pete has a ‘branding’ of her name

Pete Davidson’s sudden decision to quit taking part in a Blue Origin space flight has nothing to do with his ongoing feud with Kanye West, a source close to the star has claimed.

The 28-year-old Saturday Night Live comedian surprised fans at the end of the week when he suddenly reversed his plan to take to the stratosphere in one of Amazon billionaire Jeff Bezos’ space ships.

Pete has been in a months-long war of words with 44-year-old Kanye as he is currently dating the rappers soon-to-be ex-wife Kim Kardashian, 41 – and needless to say the Touch The Sky star is not best pleased about his ex’s set up.

However, while some fans might question if the explosive beef between Pete and Kanye might somehow have grounded the former’s plans to blast off into the atmosphere, this is not the case, apparently.

PageSix reports: “a source who knows the Kardashians told us the comedian’s exit from the space flight has nothing to do with any family drama.”

While their source adds: “Pete has been open about standing up for Kim, and there is no strain behind the scenes that has taken its toll on him. He really seems like he’s in a good place.”

That said, there are questions over why Pete suddenly dropped out of the space adventure – as the excuse of “work commitments” has not been believed by all.

Another source told Page Six: “I know that Pete has been training for the flight, I’m not sure what happened.”

Another insider added: “As with previous flights, there are always issues with weather conditions. Before Michael Strahan’s flight, they shifted launch by about a week due to the wind. So there is always this [possibility]and Pete would have known that.

“I know the party line is that it’s a filming clash, but I’m not too sure.”

It has been reported that Pete is too busy filming horror film The Home to take part in the space flight – while he has also been absent from Saturday Night Live in recent weeks in order to film the new project.

For weeks, Pete has been targeted by Kanye who has blasted him for dating Kim.

The rapper and the reality star were married in 2014 but split last year, with their divorce taking an ugly turn as Kanye has been lashing out online about his estranged wife and her new romance with Pete, which began last October.

The rapper has seemingly made threats to Pete in his music – via a song tilted Eazy, which also included a scene of the rapper burying the comedian ‘alive’ in the accompanying music video.