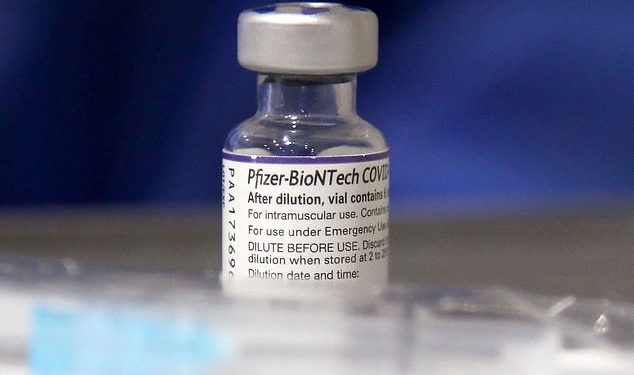 
Pfizer, and its partner BioNTech, have started clinical trials for a new COVID-19 vaccine that is specifically targeted at the Omicron variant, which they say could be available as early as late March.

The New York City based pharmaceutical company announced Tuesday that it is recruiting 1,420 participants for a three cohort trial that will determine the safety and effectiveness of the company’s shot. It has launched the trial despite CDC data showing that the fast-spreading variant already appears to have peaked in the US, meaning it could have largely disappeared by the time a shot is ready.

Albert Bourla, CEO of the company, indicated earlier this month that his company expects to submit data for authorization to the Food and Drug Administration (FDA) in March.

Some of the participants are the same as those who took part in trials for the company’s booster shot and all are between the ages of 18 to 55 – implying the jab will only be available to adults at first.

An Omicron-specific vaccine has been sought after since the variant was first discovered by South African health officials in late-November, and early indicators were discovered that it could evade vaccine protection.

In the time since, scientists have confirmed that the variant can evade vaccine immunity and while boosters can shore up protection, a jab tailored to the new strain could be the most effective at preventing its spread.

But new data shows that the sheer infectiousness of Omicron may ultimately stop its spread. 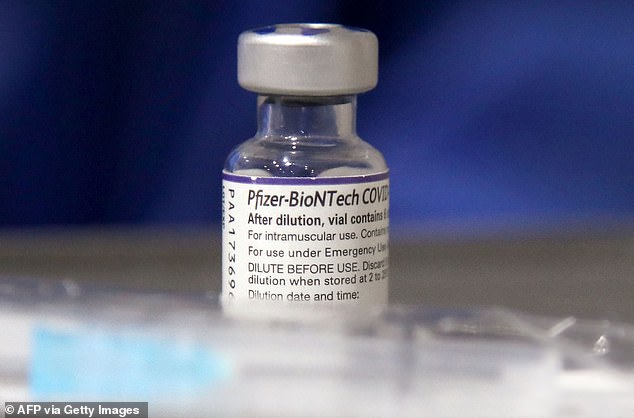 Pfizer has started trials for its Omicron-specific COVID-19 vaccine. The jab is being tested in one, two and three dose series. The company hopes to make the shot available as early as  March (file photo)

The U.S. is now averaging 723,820 cases per day. Health experts have speculated that Omicron would peak soon, with Dr Anthony Fauci saying Sunday it was likely all US states would hit their peak by mid-February at the latest. The rapid transmission of the variant caused cases to skyrocket, but also made sure it quickly ran out of people to infect. Data from abroad, and specifically the UK and South Africa, showed that the variant peaks quickly, then falls quickly, once it take hold.

Two weeks ago, the U.S. was recording 766,939 cases per day. Last week’s totals are skewed by the Martin Luther King Jr day holiday, and lagged reporting of cases throughout the week caused lower case numbers early in the week. But state-by-state charts do show many states’ infection rates are consistently trending downwards.

The tri-state area – New York, New Jersey and Connecticut – became America’s initial Omicron epicenter in December, but infection rates there have since gone into freefall, suggesting that predictions the variant would burn itself out quickly were correct. 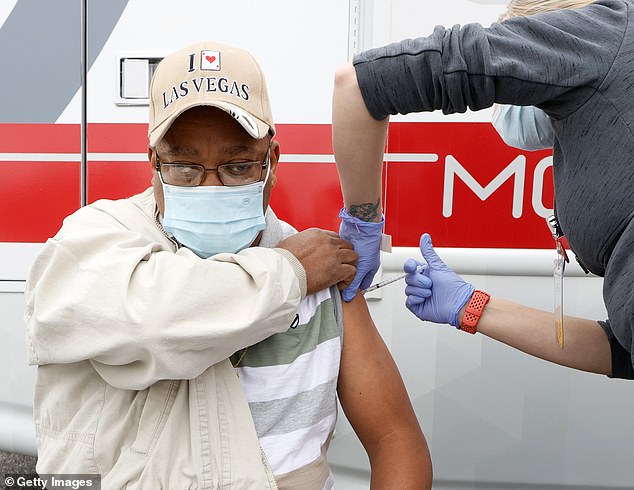 Some experts believe the March rollout of the shots may be too late, as by then the Omicron Covid wave that is already showing signs of receding may be gone altogether. Pictured: A man in Nevada receives a shot of a COVID-19 vaccine on December 21

‘While current research and real-world data show that boosters continue to provide a high level of protection against severe disease and hospitalization with Omicron, we recognize the need to be prepared in the event this protection wanes over time and to potentially help address Omicron and new variants in the future,’ said Kathrin Jansen, head of Vaccine Research and Development at Pfizer, said in a statement.

‘Staying vigilant against the virus requires us to identify new approaches for people to maintain a high level of protection, and we believe developing and investigating variant-based vaccines, like this one, are essential in our efforts towards this goal.’

The trial will test three different regimens for the new vaccine. A one shot jab will be given to 615 participants, two shots to 600 participants and a three shot version for 200.

‘This study is part of our science-based approach to develop a variant-based vaccine that achieves a similar level of protection against Omicron as it did with earlier variants but with longer duration of protection.’ Ugur Sahin, the CEO and co-founder of German-based BioNTech, said in a statement. 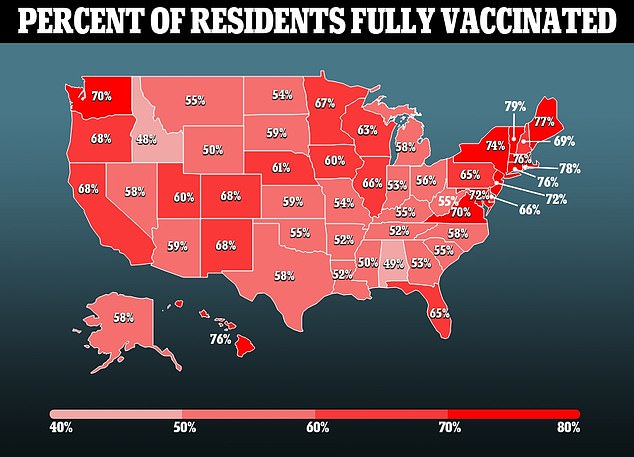 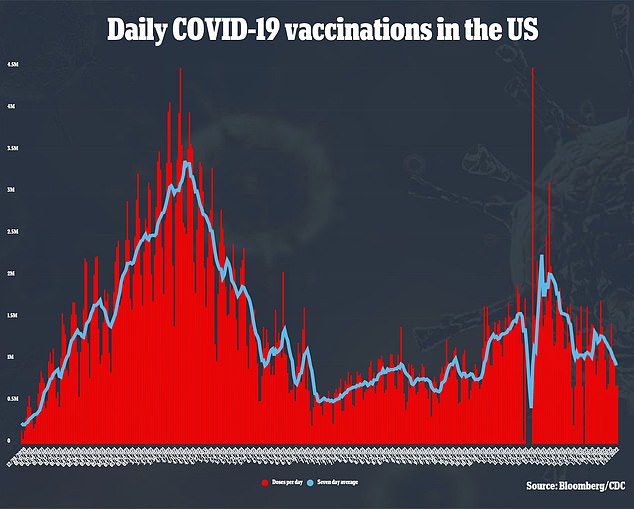 The vaccine is similar to that of the existing Pfizer-BioNTech Covid vaccine, the most popularly used shot in America and much of the rest of the world.

Pfizer said in a statement that production of this new shot, if it proves to be effective, will not lead to any diminished capacity for the company to produce its basic Covid jabs.

‘Vaccines continue to offer strong protection against severe disease caused by Omicron. Yet, emerging data indicate vaccine-induced protection against infection and mild to moderate disease wanes more rapidly than was observed with prior strains,’ Sahin said.

BioNTech initially developed the mRNA used to create the vaccine, and had partnered with Pfizer to create a flu vaccine in 2018. The company’s pivoted focus once Covid arrived, and developed what is believed to be the gold-standard vaccine against the virus.

While Pfizer – and their competitor Moderna – may have Omicron-specific shots ready soon, not all are convinced the shots are necessary.

Booster shots have shown the ability to re-establish immunity people have to Covid infection, and even people who are not boosted are still significantly less likely to suffer severe symptoms if they are vaccinated. 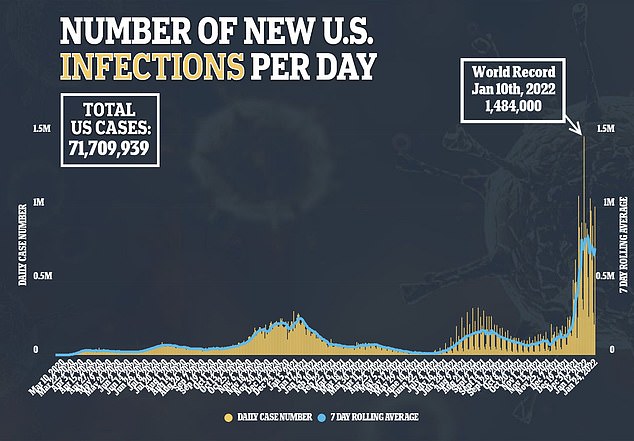 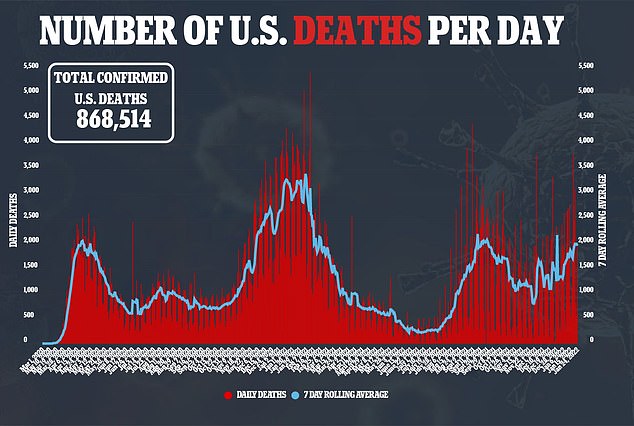 The Technical Advisory Group on COVID-19 Vaccine Composition at the World Health Organization asked earlier this month for major pharmaceutical companies like Pfizer to pivot away from making vaccines that will need frequent updates, and instead to developing shots that are effective long-term.

The Omicron wave is also coming to an end in some major countries – like the UK – and is showing signs of receding in the U.S.

By the time March rolls around and the shot becomes available, it may not be needed – wasting time and resources that could have gone into research and development of other treatments.

‘By the time we get an Omicron-specific vaccine manufactured, this wave will be over,’ Peter Marks, Center for Biologics Evaluation and Research at the FDA, told the Wall Street Journal earlier this month.

Why Wordle Has Become a New Online Obsession

Why Wordle Has Become a New Online Obsession