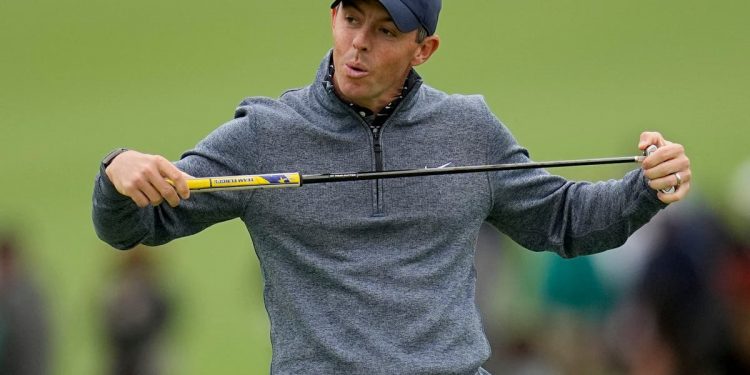 Mito Pereira will take a three-shot lead into the final day of the PGA Championship at Southern Hills after overcoming a shaky turn to surge out in front on Saturday. Pereira birdied the last to card a 69 and remain ahead of overnight leader Will Zalatoris and Matthew Fitzpatrick, who put himself into contention after shooting an excellent 67.

Rory McIlroy’s bid to end his major drought suffered a significant early blow, however. After a run of five straight pars, McIlroy pulled his tee shot to the par-three sixth into the water and ran up a double-bogey five to drop back to two under par. It would be followed by a triple-bogey six and although a run of birdies helped, McIlroy then dropped a further shot at the 18th to finish the day at level par overall.

Earlier in the day, Tiger Woods recorded his worst ever score in the PGA Championship as a successful battle to make the cut took a heavy toll at Southern Hills. Woods shot 79, his previous worst score in the US PGA being a 77 in the first round in 2011. “I just didn’t play well,” Woods said. “I didn’t hit the ball very well and got off to not the start I needed to get off to. I thought I hit a good tee shot down two and ended up in the water, and just never really got any kind of momentum on my side.”

It was confirmed after the conclusion of the third day that Woods had withdrawn from the tournament and the 46-year-old will not play in the fourth round.

Follow all the action on what promises to be an intriguing final day, below:

That should be that

Pereira chips his fourth shot on 18 off the back of the opposite side of the green and has one last chance to make it into the play-off. He’ll be able to putt from there but it’s highly unlikely to go in.

If it does drop his adrenaline will probably carry him through the play-off to the trophy.

Justin Thomas has moved out to the range to get loose again. He’ll be heading out with Will Zalatoris unless Mito Pereira can chip in from off the green.

After a drop shot, his third is knocked over to the left side of the dancefloor and is a long way from the hole. If he can get up and down from there though he’ll make it into a play-off.

A big putt from Will Zalatoris sends him into the clubhouse on the same score as Justin Thomas. It looks as though they’ll be heading into a play-off unless Mito Pereira can pull a rabbit out of a hat.

Pereira in the wet!

Oh no. Mito Pereira what have you done? He’s taken the driver off the tee on 18 and smoked it over to the right where a couple of bounces drops it into the water!

That’s going to be a penalty drop and he’ll do brilliantly to make bogey from here.

Mito Pereira bombed a driver to the front edge of the green on 17 and flicked a chip onto the dancefloor leaving himself a fairly straight putt for birdie and a two-shot lead.

When it comes off the putter it looks good but the ball slows and stops on the edge of the hole. Pereira can’t believe it didn’t drop.

He knows what he has to do now though. A par on 18 and he’ll win the PGA Championship.

Fitzpatrick’s challenge is over

He got a break off the tee on 17 by just clearing the hazard but followed that up with a pitch into the bunker. Things kept on unravelling and he finally tapped in for a bogey.

Cameron Young isn’t out of this yet either. He makes a good birdie on 17 to move to four under for the tournament and needs a birdie on 18.

His drive falls away to the right but stays in the fairway and he’s got a difficult shot coming up to reach the green. Anywhere on the dancefloor and he’ll have a putt for a three.

Zalatoris is clinging on

A bogey on 16 is followed by a birdie on 17 for Will Zalatoris who joins Justin Thomas at (-5). He’ll have a chance on the last hole for one more birdie, JT couldn’t take it, can Zalatoris?

Thomas into the clubhouse

All smiles after a final round of 67. He’s set the target to beat, Mito Pereira knows he can’t drop a shot over the next two holes.

A par for Thomas

It was a close one but Justin Thomas sends his birdie putt on 18 agonisingly close to the hole yet it doesn’t go in. He settles for a par and the lead in the clubhouse at five-under for the tournament.

He’s done all he can. Four birdies in the last 10 holes has put him in arguably the best position. Over to Mito Pereira now.