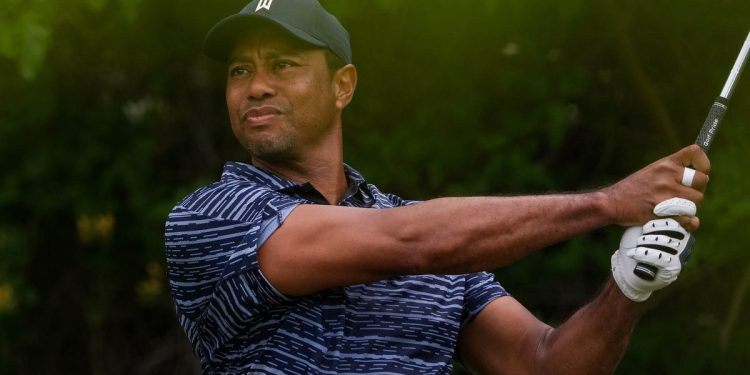 However, two of the biggest names in men’s golf will not be in the field. Defending champion Phil Mickelson, who became the oldest golfer to win a major title at age 50, has decided not to participate. And 2020 U.S. Open champion Bryson DeChambeau withdrew on Wednesday as he continues to recover from wrist surgery.

There will still be plenty of star power in the field as four-time PGA champion Tiger Woods will be playing in the tournament’s highest-profile grouping with Rory McIlroy and Jordan Spieth for the first two rounds.

SPORTS NEWSLETTER: Sign up to get daily updates in your inbox

Rough stretch for Tiger Woods, who regroups on 3

After bogeying No. 18th before making the turn to the front 9, Woods made it three in a row, adding a stroke on each of No. 1 and No. 2. It was a problem of misplaced tee shots that landed in bunkers, and then poor shots to get out of them.

Yet Woods stopped the bleeding, and gained a stroke on the par-4 No. 3 to climb back to 1-over par, which was six shots behind his playing partner and current leader, Rory McIlroy, at 5-under par.

Rory McIlroy’s pursuit of his first major victory since 2014 is off to a big start in the opening holes of the PGA Championship at Southern Hills.

The Northern Irishman had a run of four consecutive birdies that earned him a spot at the top of the leaderboard at 4 under after nine holes. Playing with Tiger Woods and Jordan Spieth in the featured group of the first round, McIlroy birdied holes Nos. 12-15. The group started on No. 10.

Woods had an excellent opportunity for a birdie on 16, leaving his approach shot 20 yards from the hole, but his putt went past the hole, and he was able to save par.

On 17, Woods went over two bunkers and another birdie chance passed him by as his opportunity to close the gap on McIlroy missed the left cup for a tap-in par, leaving him three shots behind the leader.

Woods had to wait nearly eight minutes to tee off on 18 and drove his tee shot on the par 4 on hole about 323 yards, which landed near the creek and about 160 yards from the pin. He had to settle for a bogey and is back at even par.  Of the first 21 golfers to play the 18th on Thursday, only one managed to birdie the hole. Woods is through 9.

Tiger Woods had a rough start on No. 15, which is a par 4, 405-yard hole. His tee shot hit the rough and he struggled to gain his footing from there as he ended up bogeying the hole to drop to 1-under par.

After two straight pars to begin his round, Rory McIlroy birdied four straight holes (12, 13, 14, 15) and currently has a one-shot lead over Max Homa, Will Zalatoris and Justin Rose, with John Daly close behind a 2-under.

Tiger Woods off to fast start

Woods has won at Southern Hills Country Club, taking home the Wanamaker Trophy in 2007. Woods seeking his fifth PGA Championship. He started off at the back nine at No. 10 with Rory McIlroy and Jordan Spieth. Woods birdied the first hole to get off to a fast start. In Woods’ last appearance at Southern Hills, he also birdied the 10th hole to start the tournament.

Phil Mickelson not missed at PGA

TULSA, Okla. – Tuesday’s Champions Dinner at the PGA Championship was light on past winners of the Wanamaker Trophy.

Just over 10 PGA champs attended the dinner in the main clubhouse of Southern Hills Country Club, home this week to the 104th PGA Championship.

Among the missing? Phil Mickelson.

“Phil was not missed,” said Dave Stockton, who won the PGA Championship in 1970 and 1976. “I think Phil would have been a big distraction. The story here this week is the PGA.”

Mickelson would have hosted the dinner after becoming the oldest major champion last year when he won the PGA Championship at Kiawah Island two months shy of turning 51. Mickelson elected not to defend his title this year as he extended his self-imposed hiatus from the game following disparaging remarks of the PGA Tour and the oppressive Saudi Arabia regime, which is financially backing Greg Norman’s rival LIV Golf Investments.

TULSA, Okla. — Three-time major winner Jordan Spieth is one Wanamaker Trophy away from completing the career Grand Slam – an exclusive fraternity consisting of Gene Sarazen, Ben Hogan, Gary Player, Jack Nicklaus and Tiger Woods – and he’s never been in better form ahead of what will be sixth attempt at the PGA Championship since winning the 2017 British Open at Royal Birkdale.

“It’s an elephant in the room for me. It’s a goal of mine,” Spieth said during his news conference ahead of the 104th PGA at Southern Hills. “If you just told me I was going to win one tournament the rest of my life, I’d say I want to win this one.”

He’ll enter the week riding the momentum of his 13th Tour title in a playoff at the RBC Heritage in April and shooting 64-67 on the weekend to finish second a shot back of winner K.H. Lee at the AT&T Byron Nelson last week.

Bryson DeChambeau ‘not ready yet’ to return from wrist surgery

Bryson DeChambeau traveled to Tulsa, Oklahoma, this week with the hopes of playing in the 104th PGA Championship at Southern Hills Country Club.

But, after testing his surgically repaired left wrist over the last few days, he decided to withdraw from the second men’s major of the year.

“Just not ready yet,” DeChambeau said in a text to Golfweek.

DeChambeau hasn’t played on the PGA Tour since the Masters. He missed the cut after struggling through the first two rounds with a 76 on Thursday and a Friday 80, the highest major championship score of his career.

When asked to share his feelings about Phil Mickelson being absent from the PGA Championship this week, Woods expressed his disappointment that the defending champion wouldn’t be competing, saying, “We’ll miss him,” but didn’t mince words.

“Phil has said some things that I think a lot of us who are committed to the Tour and committed to the legacy of the Tour have pushed back against, and he’s taken some personal time, and we all understand that,” Woods said. “Some of his views on how the Tour could be run, should be run, been a lot of disagreement there. Obviously we’re going to have difference of opinions, how he sees the Tour, and we’ll go from there.”

During his Tuesday press conference, Woods made it perfectly clear he’s committed to the PGA Tour and distanced himself from the vision for world golf that Mickelson, Greg Norman and others are pitching.

“I believe in legacies. I believe in major championships. I believe in big events, comparisons to historical figures of the past,” Woods said. “There’s plenty of money out here … You have to go out there and earn it.”

Armour: No Mickelson at the PGA is actually a relief

Phil Mickelson’s absence will no doubt loom large over the PGA Championship. A year after his improbable win at Kiawah Island, this week would have been a celebration of that accomplishment and so many others in his career.

Instead of sadness at how far the most beloved golfer since Arnold Palmer has fallen, however, there should be a sense of relief. Bad as it’s been to see his image and reputation go up in flames from a distance, it would be far worse to see the blaze up close.

And that’s exactly what would have happened had Mickelson showed up at Southern Hills.

He will not be able to dodge the pointed questions about the new Saudi-backed golf tour or the unauthorized biography of him that was released this week whenever he does resurface. The more space he can put between himself and the revelations that undermine the Man of the People image he’s crafted so carefully all these years, the better.