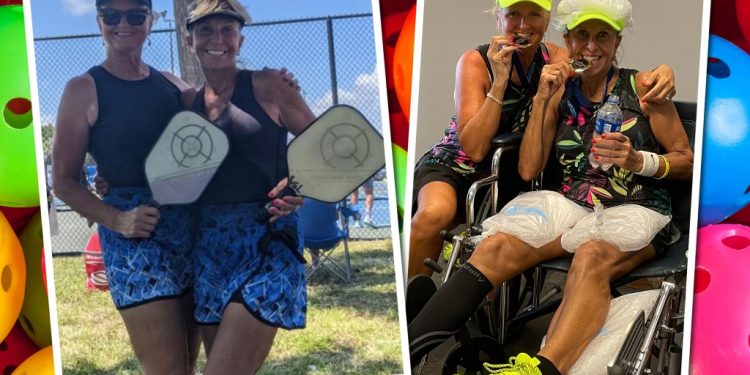 Val Thomopalos is a self described “pickleball addict.” The active 63-year-old Land o’ Lakes, Florida, resident picked up the paddle sport in May 2020 after having been a tennis player and Ironman triathlete.

“I immediately loved it,” Thomopalos told The Post. “We seniors as we get older, feel like we are less visible, and this sport brings us together. Also, I am very competitive, so I love the fact that I can compete against other athletes my age and excel.”

But her regular pickleball habit, which includes tournaments all over the Sunshine State — and flamboyant matching attire with her doubles partner — has landed her on the sideline several times.

“I’ve had three pickleball injuries in a year and a half,” said Thomopalos, who has twice strained her calves, necessitating three-week hiatuses. She’s also strained a knee ligament. “They are all due to my own negligence. As an older person, I never valued stretching when I was younger.”

Picklebill has been billed as a more accessible and a less intense tennis alternative, but experts say the popular pastime is still leading to a rash of injuries amongst the senior set. “Obsessed” retirees are playing several hours per day, leading to overuse injuries. The older demo is also more likely to have weak bones, putting them at a greater risk for fractures.

“Five years ago, pickleball wasn’t even something on the radar, but now injuries from it are common in that over-55, over-60 population,” Dr. Samir Mehta, chief of orthopedic trauma and fracture care at Penn Medicine in Philadelphia, told The Post. “It’s a real phenomenon.”

Mehta has seen a number of overuse injuries like tendonitis, arthritis, muscle contusions and sprains. But he’s also noticed issues like patella, wrist or elbow fractures that require surgery.

“It’s an older population that tends to have osteoporosis or osteopenia and that feeds into the severity of an injury if you have a fall,” he explained.

A hybrid between badminton and tennis, pickleball originated in 1965 with three friends on Bainbridge Island in Washington state. But during the pandemic, its popularity soared, especially among athletic elders. Last month, the Sports & Fitness Industry Association reported that the trendy pastime has seen a massive 39.3% jump in the last two years, making it the fastest growing sport in the US. Competitive leagues have sprung up nationally, it has its own dedicated glossy lifestyle magazine, and last summer, the pursuit even spurred bitter infighting between residents and senior citizen players in a New Jersey town.

It’s appealing to boomers because it’s usually played in doubles and the court is smaller than tennis, so there’s less real estate to cover. And Mehta noted people are living longer, more active lives than ever and settling in communities where the sport thrives.

“It’s great for cardio and it’s an intense strategic game,” Tampa, Florida, resident Alan Weinberger, 62, told The Post. “There’s a lot of camaraderie. And it’s good for my ego. I had a stressful and successful career, so it’s a slight substitution. It hits all the chords for me.”

Weinberger, a retired Wall Street executive and former basketball and tennis player, took it up in June 2018 and plays six days a week, for four to five hours a day. But he’s had his share of painful sprains and tears due to his infatuation with the game.

“In January 2019, I tore a hernia. It was an eight-week period where I couldn’t play. Then last year, I had a second-degree sprain of the right calf muscle. I was out four weeks,” said Weinberger, adding that his wife partially tore her bicep and rotator cuff from wielding the pickleball paddle.

“A common theme with this population is that they play every day. They describe themselves as obsessed and many injuries are from repeated stress,” Roland Rodriguez, clinic director at Atlantic Physical Therapy in Toms River, NJ, told The Post. He said pickleball is to blame for most of the sports injuries in his older patients.

But mature competitors shouldn’t ditch it. They should just play smarter.

Rodriguez advises dynamic stretching and warm ups, balance and stability exercises along with cross training and simply listening to one’s body. “It will let you know when you’re overdoing it,” he said.

Weinberger and Thomopalos have found that prevention is key. Weinberger stretches, does Pilates and meticulously hydrates, while Thomopalos also stretches, sees a chiropractor and has regular massages to stay healthy.

“My goal is to become a senior pro before my knees give out,” said Thomopalos. “It’s on my bucket list.”

Priti Patel under fire again over visas for Ukrainians