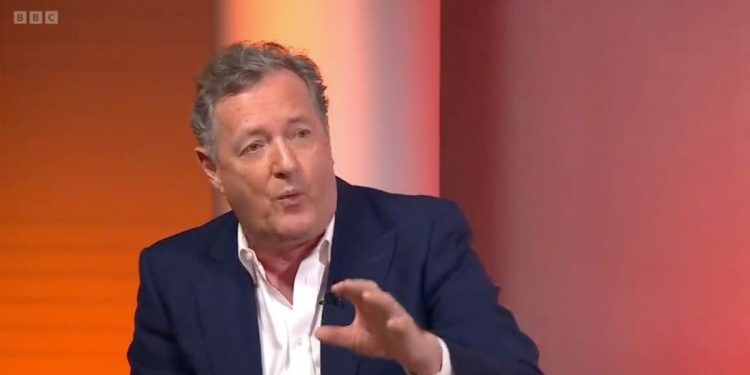 
Piers Morgan jokingly asked a TV presenter if he was ‘allowed to have an opinion’ as he made an appearance on BBC’s Sunday Morning show.

The controversial star, 56, was on the channel to discuss the day’s newspapers but had to make a quick jibe about his previous job at Good Morning Britain.

He sensationally quit the morning show early last year after refusing to apologise for the comments he made about Meghan Markle following her interview with Oprah Winfrey.

Appearing on the BBC show today, Piers told presenter Sophie Raworth: “I haven’t been on breakfast television for nearly a year.

“It feels weird but nice. And my one question for you is… Am I allowed to have an opinion? Because that was the problem before.”

She responded: “Well, you’ve come to tell us about the papers.”

Piers then moved on to discuss the latest stories appearing in the newspapers, including Novak Djokovic’s deportation, the Downing Street parties and more.

Speaking to the host, Piers launched into a two-minute rant as to why the Conservatives have lost the “trust” of the public over their “brazen” Downing Street parties.

Piers condemned the May 2020 drinks party that was reportedly organised by Martin Reynolds over email, with some 100 members of staff invited.

The party would have happened at the same time lockdown rules stated that people could only meet with one other person.

Speaking on the BBC show, Piers said: “The court of public opinion has come back and found [Johnson] guilty of the most brazen rank hypocrisy imaginable.

“This was the time when the entire country had been in lockdown for weeks on end. This was a time when you couldn’t go and see loved ones when they were dying in hospital from this virus.

“This was… literally minutes after [Oliver Dowden] had the brass neck to stand there at the Downing Street press conference and order everybody ‘you’re allowed to only meet one person, outside, at two-metre distance from another household’”.

Piers, of course, also discussed Prince Harry and Meghan during the chat.

The broadcaster believes that the couple have made a calculated choice to “pop their heads up” as the Queen deals with the loss of her husband, Prince Philip, and Prince Andrew’s legal battle.