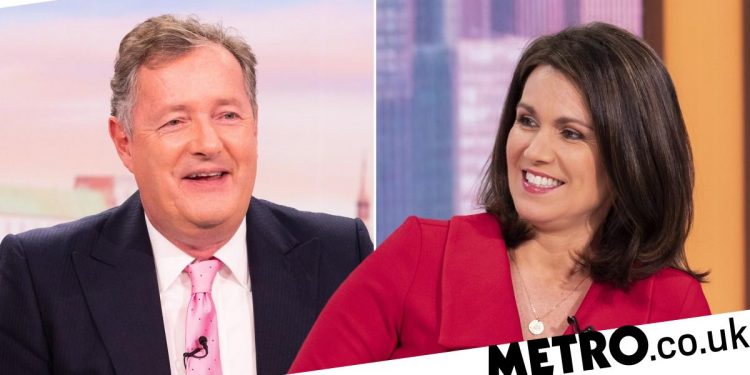 
Piers Morgan has revealed Susanna Reid has finally made contact with him to wish him good luck ahead of his TalkTV show’s launch next week.

The broadcaster leaked a message sent by his former Good Morning Britain ‘wife’, which he had received via WhatsApp with just days to go until his new programme Uncensored makes its hotly anticipated debut.

Piers shared a screengrab of the exchange on social media alongside a caption that read ‘BREAKING NEWS’.

The message came after he admitted he was still waiting to hear from Susanna.

Piers and Susanna fronted Good Morning Britain together for six years until his dramatic exit from the programme in March 2021 following his comments about Meghan Markle.

At the time, the controversial broadcaster said he did not believe Meghan’s claims about her mental health in response to her interview with Oprah Winfrey.

Piers recently hit out at Good Morning Britain for valuing Susanna’s opinion on the Duchess of Sussex over his.

‘Everyone was tuning in to hear my opinion, hence the massive ratings that week, I gave an honest opinion, it’s an opinion I still have,’ Piers said as he reflected on his exit.

‘I still don’t believe a word Meghan Markle says. I think almost everything that comes out of her mouth is complete bulls*it. But whether you agree with me or not doesn’t matter.

‘Susanna Reid, on that same show where I got all the trouble, she was saying the complete opposite. Well, why is she entitled to believe her given how many lies were coming out Meghan Markle’s mouth?’

At the time of their explosive debate, Piers had said: ‘I’m sorry, I don’t believe a word she said, Meghan Markle. I wouldn’t believe it if she read me weather report.

‘The fact that she’s fired up this onslaught against our Royal family I think is contemptible.’

Susanna, however, said: ‘Well, that’s a pretty unsympathetic reaction to someone who has expressed those thoughts.’