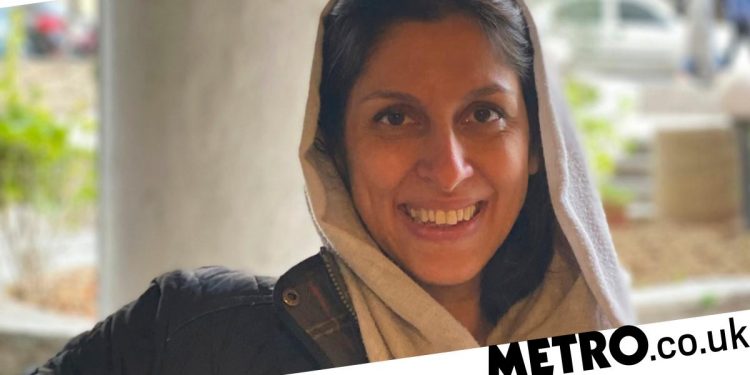 
Celebrities including Piers Morgan, Victoria Coren-Mitchell and Susie Dent have shared their happiness after Nazanin Zaghari-Ratcliffe was freed from Iran.

Nazanin will return to her husband and seven-year-old daughter in the UK after being held in Iran since 2016.

She was accused of plotting to overthrow their government, which she has always denied.

Nazanin has been under house arrest and was given her passport back this week.

Twitter has been celebrating the news, with some big names calling her family ‘inspirational’ and the news of her release ‘amazing.’

The first official photo of Nazanin enjoying her freedom was shared by her MP, Tulip Siddiq, who tweeted: ‘It’s been 6 long years – and I can’t believe I can FINALLY share this photo. Nazanin is now in the air flying away from 6 years of hell in Iran. My heart goes out to Gabriella and Richard, as her long journey back home to them gets closer by the minute.’

Quiz show host Victoria shared a lengthy statement to say: ‘To the news people who are getting in touch with me, thank you so much but it isn’t my story, and anyway it feels too soon.

‘All I want to say is that this is an inspirational family” the heroic Richard Ratcliffe, Nazanin and Gabriella, and their wider family in England, Wales and Iran, have strength and bravery that is beyond words.

‘They are showing the world the power of hope, faith and effort. Also Tulip Siddiq has been a phenomenal constituency MP. God bless all of them.’

Countdown favourite Susie Dent also dedicated her famous ‘word of the day’ to Nazanin today with a touching tweet reading: ‘Word of the day, for Nazanin, is the French ‘retrouvailles’: the joy of reuniting after a long, long time apart.’

Other celebs sharing their joy were Rylan, whose day was made by the news.

‘That’s amazing news about Nazanin Zaghari-Ratcliffe. Her husband and daughter finally get her back where she belongs. What lovely news,’ he tweeted.

Newsreader Victoria Derbyshire turned on her caps lock to share the news: ‘Some JOY!!!!!! Detained in Iran since 2016, Nazanin Zaghari-Ratcliffe IS ON HER WAY HOME TO HER HUSBAND AND DAUGHTER HERE IN THE UK’

Other politicians have also shown their support, with Prime Minister Boris Johnson calling her release a ‘huge achievement for British diplomacy.’

Meanwhile, Labour leader Sir Keir Starmer said he was ‘so delighted for them’ following the ‘incredible moment.’

News of Nazinan’s release comes after the Government settled an outstanding £400 million debt owed to the regime in Tehran.

Mrs Zaghari-Ratcliffe’s husband, Richard, said the family is ‘looking forward to a new life’ and that his wife wants a cup of tea when she gets home.


MORE : ‘They’d better be ready’: BBC’s Clive Myrie returning for second Have I Got News For You hosting gig after fleeing Ukraine


MORE : Joe Biden calls Putin a ‘war criminal’ for the first time amid his invasion of Ukraine

Arsenal vs Liverpool LIVE: Premier League updates – cagey first half at the Emirates

Arsenal vs Liverpool LIVE: Premier League updates - cagey first half at the Emirates