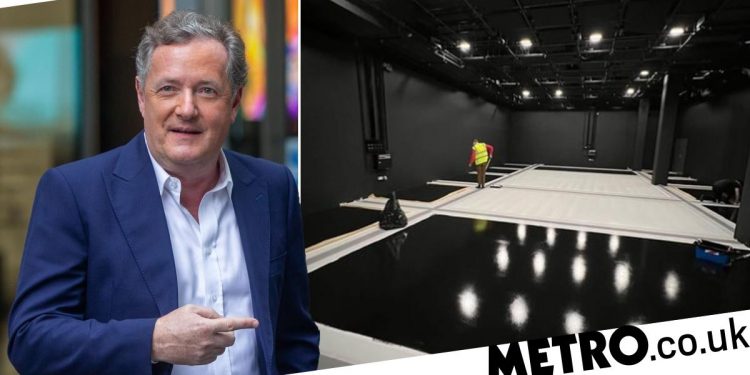 
Piers Morgan is preparing for his big TV return after he left Good Morning Britain, showing off his brand new studio.

The journalist and presenter, who’s set to launch a show on TalkTV, shared a snap of the empty studio.

‘If you judge a man by the size of his studio then I’ll be MASSIVE when my new global daily prime-time TV show launches in a few weeks. ps relax, those aren’t actually dance-floor lights… 🕺.’

Piers, 56, won’t be absent from screens for too long as he is set to launch a daily news programme on TalkTV this spring.

Promoting his brand new series, the TV star quipped: ‘I’ll be a tri-continent irritant which is something I’ve been aspiring to be for quite some time… If you’ve missed me on morning TV, I’m sorry, I’ll be back very soon.

The network will offer ‘a mix of programming from News UK’s stable of household brands’ covering news, sports, entertainment and current affairs with a sprinkling of opinion and debate.

Piers previously said of his new job: ‘I’m thrilled to be returning to News Corp. which is where I began my media career more than 30 years ago. Rupert Murdoch has been a constant and fearless champion of free speech and we are going to be building something new and very exciting together,’ Piers said in a statement about the news.

‘I want my global show to be a fearless forum for lively debate and agenda-setting interviews, and a place that celebrates the right of everyone to have an opinion, and for those opinions to be vigorously examined and challenged.’

It comes after he quit GMB in March 2021 following a row with co-star Alex Beresford over Meghan Markle.

He received a record number of complaints but was later cleared by Ofcom.

TalkTV is expected to launch soon.