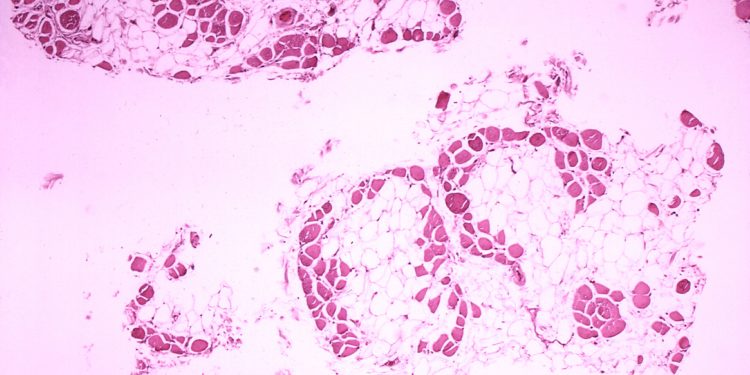 
One protein, Piezo1, is key to marshalling muscle stem cells’ unique shapes and response to injuries, but it is in low supply in those with Duchenne muscular dystrophy, according to a team at the Perelman School of Medicine at the University of Pennsylvania. However, when they re-activated Piezo1, it allowed muscle stem cells in mice to return to their normal, distinctly-shaped states so that they could repair broken down, dystrophic muscles. These findings, published in Science Advancesopen the door to potential molecular-level treatments that may slow or even halt the progression of muscular dystrophy.

“We showed that muscle stem cells have a variety of extensions that are used to sense their environment to respond to injuries, all of which is controlled by the protein Piezo1,” said the study’s lead author, Foteini Mourkioti, Ph.D., an assistant professor of Orthopaedic Surgery. “This is in contrast to previous belief, which considered muscle stem cells to be simply round and dormant in undamaged muscles.”

The Piezo1 protein was identified just about a decade ago—and netted a Nobel Prize last year for those who uncovered it—but its function in skeletal muscles has been largely unknown. However, when Penn researchers examined it in muscle stem cells, they found that it governed how the cells formed and coordinated their response to muscle damage.

Typically, muscle stem cells are called in by the body to repair muscle tissue damage. Little has been known about how they actually do that because most research on them has been done through point-in-time observations in the lab. But Mourkioti and her team were able to observe mice and discovered that their muscle stem cells have protrusions they use to communicate with each other that make them look similar to neurons (nerve cells).

Muscle stem cells also were found by Mourkioti’s team to exist in a balance of three different categories: responsive (or active) cells, intermediate cells, and sensory cells (which are closer to unassigned stem cells). The more active the cell, the less protrusions they were likely to have, while the sensory stem cells had more protrusions, typically. Amid an injury, the researchers observed that muscle stem cells focus on a rapid reaction from their responsive cells. If an injury is big enough or takes enough time, intermediate cells and, eventually, sensory cells are brought in to address the damage and adjust their form accordingly.

In effect, if muscle stem cells were organized like an army, the responsive cells with fewer (or no) protrusions would be the shock troops and the sensory cells with four or more protrusions are equivalent to the reserves a general might call in if the front-line troops were being overwhelmed. As these reserve cells are called up, they shift form to have fewer protrusions.

In the army scenario, Piezo1 proteins would act as the general. These proteins appeared to have the ability to dictate the form of the protrusions on each cell.

Duchenne muscular dystrophy is a genetic disorder that is characterized by the persistent breakdown of muscles and, thus, a constant need for repair. The study found that mice with dystrophic muscles had markedly lower levels of Piezo1 in their stem cells than those without the condition. When the researchers observed muscle stem cell responses to injuries in the dystrophic mice, they noticed significant delays in moving from the sensory state to the active state. Cells also had protrusions that were thicker and longer, indicating that they weren’t being controlled properly.

Effectively, without an able general leading them, the muscle stem cells’ army falls into disarray, and it’s overwhelmed by the volume of response needed to repair the damage inflicted by Duchenne muscular dystrophy.

However, through these observations, Mourkioti and her team believe they discovered a key to turning the tide.

Through a small molecule treatment known as Yoda1, the channels for Piezo1 were reopened in the animals with dystrophic muscles. Through that, they noticed the muscle stem cells returned to their normal structure and function, with muscle regeneration appearing stronger than it had been before.

“Even though progress has been made over the last decade on treatments for Duchenne muscular dystrophy, current strategies still do not take muscle stem cells into consideration,” Mourkioti said. “But if we focus on minimizing stem cell exhaustion and maintaining the regenerative ability of muscle stem cells, our work suggests that reactivating Piezo1 could be key to that and used alone or in combination with other therapies.”

Not only does this work have specific implications for Duchenne muscular dystrophy, but it could also benefit others with weak muscles resulting from compromised stem cell abilities, including from natural aging.

Mourkioti and her team hope to study whether additional injected treatments will be needed to sustain muscle stem cell activity. They also hope to further examine Piezo1’s functions in the body and do more tests in pre-clinical dystrophic animal models with body masses comparable to humans.

Provided by
Perelman School of Medicine at the University of Pennsylvania