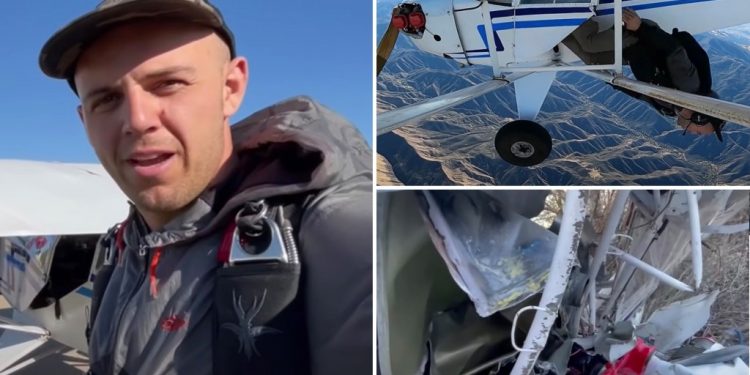 
This YouTuber may have blown his career sky high.

Trevor Jacob, a 28-year-old pilot and YouTube creator is being investigated by the Federal Aviation Agency after he crashed a civilian plane in November.

Jacob, who posted the crash on his YouTube page, has been accused by aviation experts of masterminding the incident.

He regularly shares videos of his wild stunts and antics on his page, which has more than 130,000 subscribers.

Jacob has not responded to The Post’s request for comment.

His crash clip showed him flying over the Los Padres National Forest in California when his small Taylorcraft BL64 aircraft had engine failure, he said in the clip.

The video featured Jacob bringing the ashes of his late friend, Johnny Strange, so he could spread them during the flight. One shot then showed him parachuting out of the plane and landing on the hills as his plane crashed in the distance. He then filmed himself finding his wrecked plane and claimed he had no water, cellphone service and was in pain from hiking through the bushes.

“I am exhausted. I’m so thirsty. I’m scared, I’m in trouble, I’m cut all over the place,” Jacob said during his walk. “The only option I have is crawling through these bushes like I have been for the last five hours. And, uh, I’m in pain, man. I’m hurting. Whatever I’m going through, I wish upon nobody.”

Other aviation vloggers have questioned the authenticity of the video and wondered if it was staged. YouTuber Trent Palmer noted in a video he made examining the stunt, that Jacob seemed to have unlatched his plane door before the engine failed.

Palmer, a private pilot, stated that Jacob didn’t seem to look for a secure place to land. He then looked at aerial footage of the area where Jacob landed and said that Jacob should have tried an emergency landing with a higher possibility of success.

“The YouTube beast is an interesting one, and it obviously rewards people who get the clicks and get the views so we’re always gonna be in a battle of getting peoples’ eyes on our videos,” Palmer says in his video. “This one’s just way over the line. It frustrates me because when someone does something like this, goes out an apparently intentionally crashing an airplane to get views, it looks bad on all aviation content creators.”

Dan Millican, host of the airplane channel Taking Off, revealed in another video that general aviation pilots don’t typically wear the type of parachute that Jacob wore when they fly.

Millican also stated that Jacob was wearing a skydiving parachute. Pilots who fly small aircrafts opt not to wear these types of parachutes because they can be too heavy.

The FAA confirmed to AVWeb that they would be investigating the situation and could not discuss it in full detail.